Belonging in the Workplace: What Does It Mean, and Why Does it Matter? 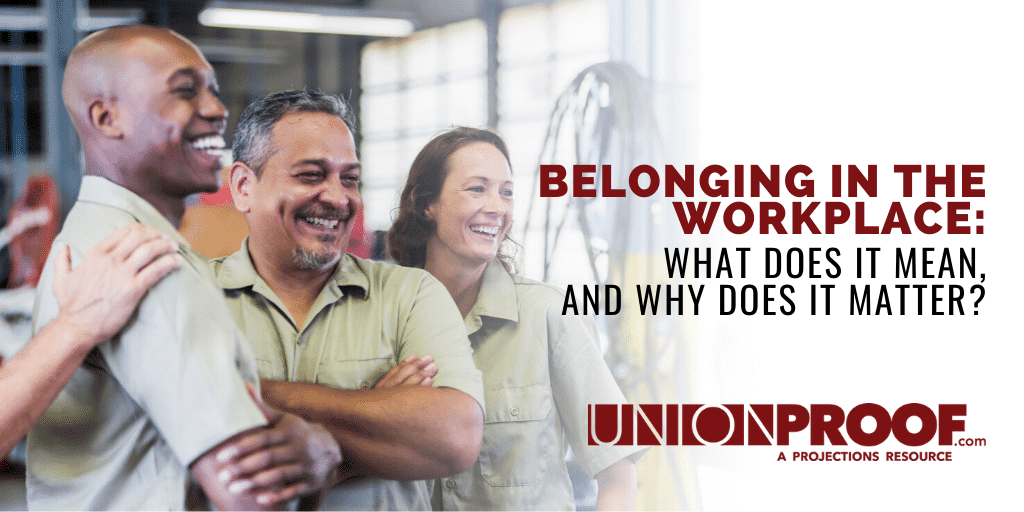 “Belonging in the Workplace” – What Does It Mean, and Why Does it Matter?

Do some employees join unions simply because they want to feel a sense of belonging to something? Do they only join when they believe they are not being treated fairly by management? Each employee has a different motivation for joining a union, which is why it is sometimes difficult to stay union-free. But sometimes there doesn’t seem to be any reasonable explanation for some employees choosing to vote for a union. This is especially true if they have been satisfied, high-performing employees who work well with their supervisors. So, what is going on? And, what exactly does belonging in the workplace mean?

In Need of Belonging

Remember when they talked about Maslow’s hierarchy of needs in school? The most basic needs on the hierarchy are physiological, like food and shelter. Once those are met, people fulfill their safety needs, which include employment, health, and personal security. Then comes love and belonging, followed by esteem and finally self-actualization, which is the fulfillment of a person’s potential.

Belonging is right in the middle of the needs list. It is a powerful human need that drives behaviors, leading people to form ties with friends and co-workers. Belonging in the workplace means feeling valued through positive connections with others and able to bring the authentic self to work. People are always looking to develop a sense of connection in their personal and work lives because that is how they validate their feelings and fulfill the need of belonging.

Additional research after Maslow’s theory has shown the organization of the need levels isn’t cut and dried. People don’t have to satisfy a lower need to pursue a higher need fully, and one behavior can meet more than one need. For example, a person who develops a sense of belonging will likely have more self-esteem (higher need) and feel more secure/safe (lower need). Psychological safety in the workplace refers to feeling safe to be your authentic self.

The Pull of Unions

Understanding the need to belong sheds light on how people act in the workplace and the pull of unions. One of the most confusing employee behaviors, from an employer’s perspective, is when people vote for a union when they are satisfied with their job, working conditions, compensation, and benefits. Why would someone who seems like a content, engaged employee vote to let someone else represent them? What would encourage them pay dues to get something they already have? Why do they go along with the crowd? What’s going on?

Sometimes, it’s just a matter of going along to get along. This is something frequently seen when some union members agree to strike, even though they know it will hurt them financially or really just don’t want to participate in the turmoil. During protests, people are carried along by the camaraderie and emotion of the crowd, feeling like they are really participating in something important and able to drop defenses and just be themselves. People join a union, protest, strike, or alt-labor group – even when satisfied with the workplace and knowing it could lead to personal and work problems – because of the deep need to belong.

Employees may be productive and good at their jobs, but:

There has been significant research on human bonding, including in the workplace. Psychologists have found that for some people, attachment to co-workers is more motivating than money. As an employer, you’re thinking in terms of equity and fairness, and the employee is thinking in terms of belonging. People who feel like they belong believe they are fully supported, accepted, and able to share experiences.

Employees “belong” to unions for many reasons. Some employees who vote for unions have very specific reasons. They believe their wages will go up or benefits will improve, or management treats employees poorly, or employees need a strong collective voice because they aren’t getting the attention of organizational leaders. Sometimes, it’s easy to pinpoint why unions can convince employees to start a campaign and vote a union in.

Many times it is not. That is what blindsides employers. They believe that employee-employer relations are good, and most employees are engaged. The union targets the few dissatisfied employees, and from there, the effort grows. The more people who get on board, the more the people holding out will be drawn to the effort. It is the need to feel the sense of belonging that drives some people to support the union organizing campaign or vote for unionization. As one Monster.com author points out, in a discussion on ways to connect with co-workers, the one thing all employees have in common is the employer. Uniting with co-workers against the employer creates a sense of belonging.

Unions have a deep understanding of the need to belong, probably more than many employers. It’s why they use words and terms like brotherhood and sisterhood, collective strength, solidarity, unite, and banding together. The United Food and Commercial Workers International Union calls itself a “proud union family”. They maintain a UFVW blog, and it covers many topics like protecting your pet in cold weather, personal union member stories, scholarships, robots, and other matters of interest. One recent blog has a subheading, “You don’t have to go it alone.”

Working on the Emotions First

For younger generations of workers that include Millennials and Gen Z, technology plays a role too. Many people experience a significant portion of their social interaction via smartphones and the internet. They grew up using social media, which is a means of gaining a public voice, engaging others, and staying connected. Connectedness is related to belonging. This appeals to the need for belonging. Younger works want to continue the sense of belonging in the workplace, especially since social media cannot replace human interaction. Research is indicating the younger workers are accepting of organizing in some form, whether it is a formal union campaign or an alt-labor group.

Some people just want to belong to something for emotional and mental support and not necessarily because they think the employer is doing anything wrong. That is one reason why unions work on people’s emotions first sometimes. “Belong to the union, and share a common cause with your coworkers and friends.” It’s a difficult challenge for employers to address. In some cases, it seems that no amount of goodwill on your part will stop some people – those low self-esteem, those who avoid being antagonists among co-workers, and those who believe they aren’t fully accepted – from going along with the crowd. In this case, the crowd consists of union supporters.

Yet, there are ways to minimize the chances of anti-union employees from signing union authorization cards or voting for unionization. Leaders need to understand how to deepen employee engagement and develop alternate ways for employees to resolve their need for belonging. It takes a concerted leadership effort. Do your managers and supervisors understand the need for belonging and how it impacts the workforce?

Can your supervisors identify the employees who are probably experiencing isolation in the workplace? There are always clues that an alert supervisor will notice: someone who always eats lunch alone at their desk or an employee who “keeps to himself” and never volunteers an opinion. Do your managers know how to bring co-workers together and make them feel like a cohesive team? Additionally, do your leaders understand the importance of developing a sense of belonging in the workplace for union avoidance? Do they know how to deepen workforce engagement?

Belongingness isn’t a touchy-feely principle. It’s human nature, driven by the brain’s responses to positive events promoting feelings of belonging. One of the biggest challenges of old-school managers today is understanding the days of command-and-control are over. Leadership must consider factors like employee psychological needs to become an employer of choice and keep the union out.

At UnionProof, we believe in cultivating a sense of workplace belonging and fostering a strong culture to become an employer of choice.  Staying union-free takes strong, trained leaders who understand human nature and know how to nurture a sense of belonging in the workforce persistently. We’d love to help you create a custom solution for your organization where unions simply aren’t necessary.