“Right now, there is a surge in labor activity nationwide, with workers organizing and filing petitions for more union elections than they have in the last ten years.” -  NLRB General Counsel Jennifer Abruzzo.

Today's environment challenges retail employers to not only staff their operations but also recruit and retain applicants and employees who share the retailer's values and who will contribute to the organization's success. If we remember 2021 for the Pandemic, the Great Resignation, or even for Striketober, we may remember 2022 as the Age of Affiliation - specifically with organized labor. Increasingly, however, the news is filled with images of retail employees picketing, protesting, boycotting, and overall attempting to change the organization's values- an environment not unlike what the country faced in the turbulent 1970s.

In the 1970s, Southwest Airlines became well known for its different approach to selections. The airline utilized a behavioral needs theorists' approach to hiring, focusing on sorting applicants by their motivational needs while ensuring Southwest offered good pay, benefits, and the opportunity to advance. Southwest continues to invest heavily in screening for those whose values are in sync with the organization's, resulting in it hiring less than 2% of its applicants.

Southwest applicant screens focus on three attributes: a need to excel, a servant's heart, and a fun-loving attitude. Some jobs, such as a pilot, require advanced skills, but when possible, the focus is on the behavioral needs of the applicants. The challenges that retailers face in this age of affiliation may prompt them to similarly make selections based upon personality, motivation, and the individual's needs. Skeptics might suggest that the quality and quantity of applicant flow would inhibit a retailer's ability to screen so selectively; however, this age of affiliation vividly illustrates the ramifications of selections incongruent with organizational values. Some even suggest that the organizational values themselves and not pay, benefits, and relationship with their management are at the heart of the prominent organizing activity.

And prominent it is. As referenced by GC Abruzzo, the current surge in NLRB petitions represents a 57% increase in NLRB election petitions over the same period in 2022. This increase likely surprised even the most active union organizers, and unfortunately for retailers, the retail industry is the primary target for organizing activity. Furthermore, these elections' dramatically high win rate further motivates retail employee-organizers to target their other locations. Surprisingly, during the spring of 2022, the most prominent elections occurred amongst companies with no union histories and known for providing class-leading compensation and benefits.

One common thread among retailers experiencing high levels of organizing activity was their tendency and reputation for focusing on Generation Z as the primary pool of applicants. Pew Research notes that, unlike Millennials who grew up during the Great Recession and for whom finding a job was a plus, Gen Z finds itself confronted with a very turbulent and uncertain employment environment. This unique experience may have shaped Gen Z's behavioral need to wrest control of their employment future away from the company, take as much control over their employment as possible, and in many cases, organize union representation. Labor activity, in retail especially, has rapidly increased as more of Gen Z enters the workforce. 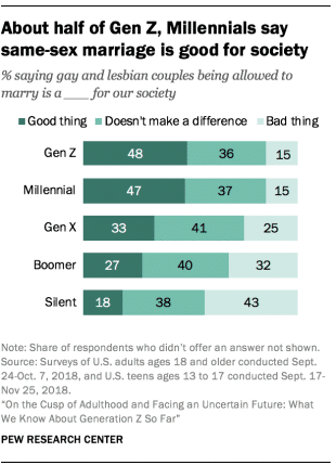 Both Gen Z and Millennials are characterized as having more progressive needs and values than other workplace cohorts. An example would be their level of support for same-sex marriage, which is noticeably different than other cohorts.

With this in mind, it shouldn't be surprising that today's Gen Z and Millennials seek to unionize and create what they see as an institutional manifestation of social justice in the workplace. Those voting for unionization in recent months indicate that they are primarily frustrated by their inability to influence their employer on the social issues of today. Their concerns include climate change, immigration, rights for transgender people, and a host of other issues that fall outside the definition of mandatory terms of negotiation for collective bargaining. Much of the organizing activity has been directed at retailers in California and the West Coast. Those corresponding applicant populations of Gen Z and Millennials are demanding control or power over their employers, specifically, for them to have a voice in the workplace.

Want to read the full report?

Get your copy of the second annual Labor Activity in Retail Report, here.

After analyzing Economic Policy Institute data nearly six years ago, IRI Consultants forecasted the rise in unionization among Millennials and Gen Z workers noting that three-quarters of the growth in union membership in 2017 came from people younger than 35. IRI Consultants at the time recommended reviewing compensation strategies and, most importantly, advised clients to "develop and use true leadership skills instead of relying on the old notion of simply being the boss."

However, addressing workplace dissension with higher wages alone is a temporary fix. Many retailers will respond to the organizing efforts with increases in compensation and benefits to prompt greater employee retention and satisfaction. Such increases likely encourage others to respond similarly in what is often referred to as the spillover effect. Compensation alone won't have a significant impact on slowing the increase in labor activity in retail organizations.

The best retailers are again investing in leadership development, embracing servant leadership principles, and investing in understanding the needs of the employees and their applicant base.

These current employer challenges are not unlike what Southwest Airlines and other employers faced during the turbulent 1970s. Retailers then, as now, faced a changing collective set of values among the younger generation- the hippies. America's employers attempted to maintain productivity while simultaneously hiring amongst a population committed to collective action. In the turbulent 70s, young workers protested in the streets against the Nixon administration, the war in Vietnam, and later their frustrations with wages in the face of escalating inflation.

In response, HR professionals, known as personnel or industrial relations professionals, rallied around academic and motivational theorists to identify what the young workers needed from their employers. Several academic theories emerged, addressing human needs as either motivators or maintainers. Retailers embraced these theories as the means to screen, hire and retain the new workers, and incorporate them into the developmental plans for their leaders.

While there are many motivational theories, some of the most prominent which address human needs include: 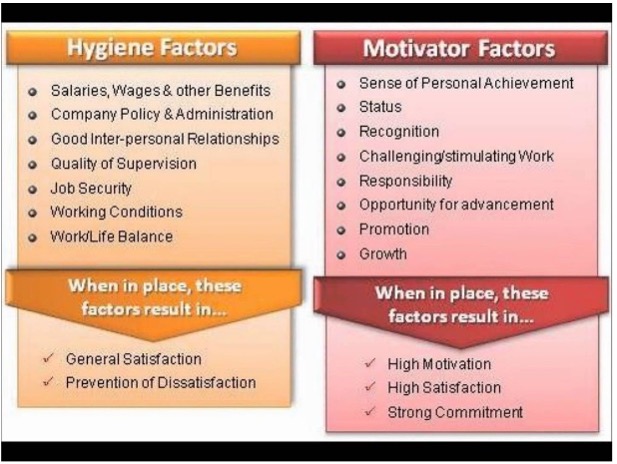 Herzberg's motivation-hygiene theory addressed employee motivation and recognized two sources of job satisfaction. He argued that workers are motivated by their need for recognition, career advancement, and self-development. On the other hand, hygiene factors lead simply to satisfaction when in place, but when lacking, it can make individuals dissatisfied with their employment. The theory is that employers should be sufficiently attentive to hygiene factors to prevent a worker from becoming dissatisfied. Critical hygiene factors include pay, relationship with supervision, the physical work environment, and the extent to which workers have interpersonal relationships with their work peers. Many would suggest the significant increase in Spring 2022 organizing activity is a result of unsatisfied hygiene factors rather than an absence of job satisfaction. 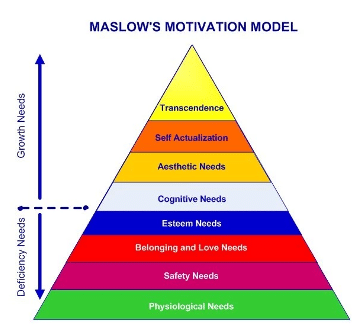 It should be noted that recognizing applicant "fit" is not a complete panacea. Of the retailers experiencing a great deal of union organizing presently is one known for selection decisions that seek to assess the applicant's fit in the context of the workplace team. This organization also has a reputation for hiring Gen Z and millennial workers with progressive leanings. Author Jas Singh detailed Starbucks' employment screening process, characterized in his article How Starbucks Hires: It's All About Fun.

David McClellan believed we all have a dominant need amongst one of three primary needs- the need for achievement, the need for affiliation, or the need for power. His theory states that the drivers of behavior are attributed to only one of these three dominant needs. McClellan argued that these needs are learned from interactions with others and are reinforced through behavior and feedback. 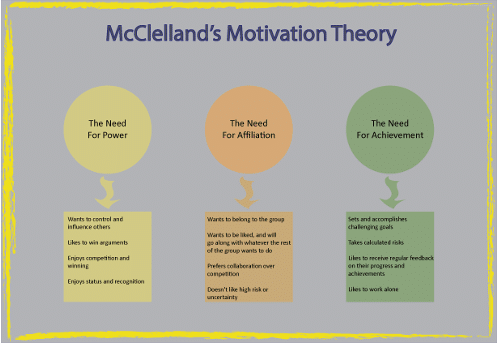 Those with a high need for achievement seek to accomplish challenging tasks. They require regular feedback on their progress and often like to work alone.

Those with a high need for affiliation want to belong to a group. They want to be liked and will often favor collaboration over competition. These workers work best in a group environment and are ideal for project or team assignments.

Individuals with high needs for affiliation have a natural propensity to accept and support unionization. However, for retailers with solid and cohesive cultures, hiring applicants with an increased need for affiliation may reinforce the existing culture rather than increase dissent.

McClellan's three needs theory has ramifications far beyond compensation. Identifying the prominent needs of its workforce enables the retailer to design recognition and reward systems, communication strategies, job design, selection decisions, and many other important human resources decisions. Given the current climate of dissension, retailers comprised of workers whose primary need is affiliation should consider recognition and reward systems that reinforce group achievement rather than individual accomplishment.

There are many other human needs theories and substantially more theories of motivation. Retailers should use whichever needs theory works best to satisfy the prominent needs of their workforce while achieving and aligning their business strategy with its human resources policies and practices.

The current environment demands action from retailers' leadership. The human resources function of the nation's most sophisticated retailers is increasingly focused on identifying the catalyst for the increased workforce dissension and prioritizing solutions to minimize disruption. Once the most challenging aspect of HR, talent acquisition has been replaced by the need to respond to or prevent picketing, protests, organizing, or other protected concerted activity.

Much of the content of The Labor Report details the challenges that retailers face with the federal government, organized labor, and emerging independent unions or worker centers. While important, some would suggest that the wave of current workplace dissension is an essential and direct result of the unmet needs of the workforce. While organizations develop strategies to address unionization and dissension in the workplace from external sources, it is vital to remain vigilant regarding the prominent needs of its workforce.

As a result, retailers should assess the academic theories addressing human needs in their own organization's business strategy. Doing so may enable the retailer to avoid the damaging public relations and productivity losses associated with widespread workforce dissension.

Don't forget to get your copy of the full 2022 Labor Activity in Retail Report, by clicking here.

About the Author Mark Codd

Mark Codd, Ph.D, SHRM-SCP is Vice President and Managing Director for IRI Consultants. Mark is an organizational change leader with a 25+ year record of driving and accelerating positive business/workforce transformations in rapid growth, for private and publicly held organizations.