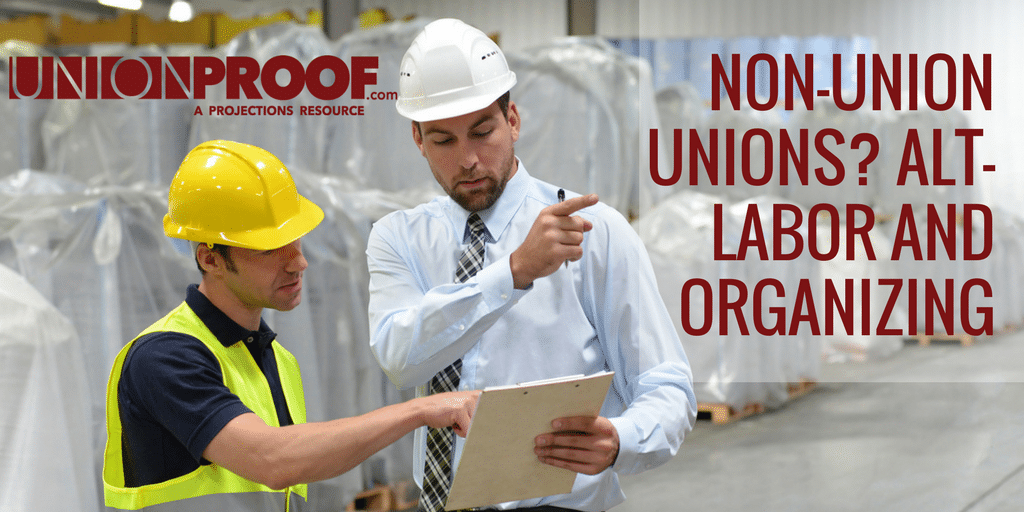 Alt-labor are worker advocacy groups that aren’t formal unions, though they have many of the same characteristics and goals as unions. They’re non-union unions, or people organizing around a common cause, like improving working conditions or raising wages. For various reasons, they’re unwilling to join a union. In some cases, the independent groups of people are essentially fronts for unions that are trying to gain information for the purpose of organizing in industries with large groups of non-unionized workforces, like retail and services. They’re easy to spot because the traditional unions fund the alt-labor groups.

Not a Bargaining Unit

Alt-labor groups are formed with different operating models but have similar goals. The groups are worker centers, associations of non-union employees, or associations of non-NLRA workers. Worker centers can be arms of unions, like the SEIU or AFL-CIO, or independent groups. They push the boundaries of fairness with activities like wildcat strikes or marching outside businesses with signs making unfair accusations. Associations of non-union employees, like the AFL-CIO’s Working America, which has 3 million members, are the union’s attempt to engage workers in the face of falling membership. The third category of alt-labor groups unofficially organizes non-NLRA workers, like railway workers, independent contractors, and farm workers.

Historically, alt-labor has used community and political pressure to promote their causes, but in the last few years, they’ve also acted much like a union proxy and have explored their power to initiate change, even so far as to work internationally. In July 2016, OUR Walmart, an alt-labor group that shares a website with Fight for $15, and the Walmart Chinese Workers Association, discussed a collaboration to address work schedule changes, among other issues. The alt-labor groups operate in a very similar way to unions but use a loophole in the National Labor Relations Act to avoid being called a bargaining unit.

The Worker Center movement is gaining steam, per the U.S. Chamber of Commerce. The Centers are organized as nonprofit organizations with the stated purpose of providing employee education and training. The issue you face as an employer is that their nonprofit status allows them to behave in a way the NLRA and NLRB would not allow union members to behave. As members of a nonprofit, they can picket and boycott your business and present themselves as a charitable organization. They can also initiate ugly internal and external campaigns and lawsuits with the intent of putting pressure on your business to take action like increasing wages and adjusting work schedules. The Worker Center can also work through sympathetic government agency professionals by convincing them you have violated the NLRA or are discriminating.

The actions of some alt-labor groups are effective. OUR Walmart has initiated walkouts and works in partnership with worker advocacy groups, like A Better Balance, to issue reports that are really nothing more than documented grievances made public to force employers into a defensive position. The Fight for $15 organization says it’s the “modern-day poor people’s campaign.” This group is an example of an alt-labor group targeting multiple corporations, like Walmart and McDonald’s, and using websites and social media to rally all workers and community members.

It is likely that alt-labor groups will increase in number and in membership as traditional union membership declines and the number of part-time and independent workers increases. There are two factors holding back alt-labor associations from thriving. One is lack of money. Membership fees are usually voluntary and/or very low. They need a big union or foundation to fund their efforts. The second factor is their limitations on their authority to collectively bargain and strike.

The Power to Mobilize Communities

Alt-labor groups can initiate activities like voluntary walkouts, but their real power lies in emotionally mobilizing the community at large to protest your business policies and procedures, harming your company’s brand. They can also mobilize state government representatives to pass laws concerning independent and part-time worker participation in things like portable health insurance. Their power also lies in the ability to appeal to all types of workers. For example, there’s the Guestworkers Alliance, the Restaurant Opportunities Centers United, and the Coalition of Immokalee Workers for migrant farmworkers. The alt-labor groups are marketing smart, making their battle cries about issues like ending sexual harassment and discrimination, raising the wages of working mothers, justice for all workers, and empowering women.

The Time’s Up movement, a companion to the hashtag #MeToo group, is a technology-driven effort to mobilize women as a group. It is an alt-labor group, in a new form, because it is focused on creating concrete workplace change for working women and getting legislation passed that addresses issues like gender parity and equal pay. The alt-labor groups are a channel for specific people to get attention focused on their issues rather than issues of the workforce at large. Women are joining the Time’s Up movement because it is focused on women’s issues only. Becoming a union member tends to make people just one of many, and special interests get lost in the representation process.

Engage Your Employees Before They Engage Themselves

Alt-labor groups offer employers insights into employee engagement. One is that engaging employees has never been more important. Your leaders must learn to connect with their employees to understand specific issues and not treat everyone the same in the age of networking. Another lesson is that people have always wanted to be heard, but now they have alternatives to forming a collective voice through technology.

If you don’t have an effective communication system that enables employee feedback, it shouldn’t be surprising to discover an online group of employees making claims that your policies are unjust or the pay is inequitable and forces people to struggle financially. You have just as much power to utilize technology, including video, web and eLearning, to inform and listen to your employees. The key takeaway is this: Make your people a priority to union-proof and alt-proof your organization.