We’re in the Proactive Era: Here’s How Labor and Employee Relations are Forever Changed

No matter how we talk about how we were able to “pivot;” regardless of the lengths we went to in taking care of employees, it’s actually okay to admit that 2020 blindsided all of us.

In a compressed time period, many of the changes already on the way were accelerated. Remote work, mental wellness, corporate social responsibility, diversity, equity and inclusion – so many of the things we were slowly working toward were kicked into high gear.

Employees today now expect their companies to respond more quickly than ever. Younger workers identify more and more with the companies they choose to work for, seeing no separation between work life and personal life, particularly online.

As leaders, we’re expected to step up – and stay one step ahead – of the challenges facing workers today. This shift has ushered us into a new era of labor and employee relations – something Projections calls the Proactive Era.

But how did we get here? And what does this mean for the future of HR and Labor Relations professionals? Today, we’ve got a roadmap for how we can navigate this paradigm shift.

Leading up to the turn of the century was the Reactionary Era, which began in earnest in the mid-1970s. Employers focused on responding to union drives, rather than preventing unionization. They were reluctant to say the word “union” because it would increase employee awareness of labor unions and “put ideas in employee’s heads.” When organizing campaigns did occur, companies often brought in paid “union busters.”

In the 80s, the number of workers participating in union elections plummeted, and union membership really began to decline. Big unions like the United Steelworkers and United Auto Workers lost 40 percent of their membership, and unions in general ran fewer elections.

In 1993, Cornell University conducted a study of union-busting practices, filled with case studies. For example, on May 27, 1992, Local 26 of the United Food and Commerce Workers requested recognition from Home Style Foods in Hamtramck, Michigan. Thirty-four out of 35 employees signed cards. The employer:

In the end, employees voted for union representation, but it took more than 17 months to come to agreement on a contract. The true cost of these campaigns was enormous – not just measured in money, but in time, resources, and loss of goodwill between employer and employee. 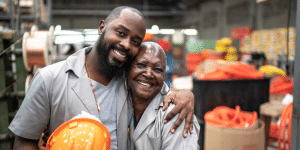 Employer perspectives began to change, prompted by a number of factors that included growing globalization. Employers began to focus on employee engagement, and there were practical reasons. A 2002 seminal study on the relationship of employee satisfaction-engagement and business performance, published in the Journal of Applied Psychology, found that business units with high employee engagement experienced 1-4 percentage points higher profitability; $80,000-$120,000 higher monthly revenue; and lower turnover rates.

A focus on employee engagement meant employer practices had to change in order to stay union-free. Employers adopted the phrase, “Not anti-union, but pro-employee” to reflect the new perspective. The goal of Positive Employee Relations became to change employee perception’s from “the company fights unions because unions hurt the bottom line” to “ the company cares about and acts in the best interests of employees.” This required a whole new approach that included strategies like:

Management strategies evolved from the union busting decades. Now, instead of union busting, management was working to remain union free through collaboration, servant leadership and adherence to values.

A holistic approach to #positiveemployeerelations is when management considers the whole #employeeexperience within context of their work and personal lives. #worklifebalance Click To Tweet

Today, we find ourselves in the Proactive Era. This era has been characterized by employers going beyond mere employee surveys into a new, holistic approach positive employee relations, in which team members understand the value of operating union-free for themselves. Not because their employer wants them to remain union-free, but because they want to remain union-free themselves.  This is the future of employee relations.

A holistic approach to positive employee relations is one which management considers the whole employee experience within context of their work and personal lives. Employees are recognized as people with physical, psychological and mental health needs. The holistic approach leads to employees wanting to maintain their direct connection to the employer, rather than going through a third party, because the employer empowers employees. The employer is not taking care of the employees but rather is helping employees take care of themselves.

There is no need for a union because employees:

Positive employee relations is about relationships not transactions; pride in work; and trust in senior leaders, managers and supervisors.

Employees take care of themselves by avoiding a union because a union takes power away from individuals. The employer puts the well-being of the employees first, taking away union claims that management only cares about profits. Of course, leadership training in the critical skills is needed to develop this high level of positive employee relations. For example, can your leaders identify and address employee relations vulnerabilities?

Positive #employeerelations is about #relationships, not transactions; pride in work; and #trust in senior leaders, managers and supervisors. #employeeexperience Click To Tweet 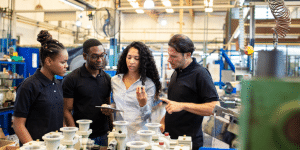 Roadmap to the Proactive Era and Beyond

It may seem like a tall order to shift from employee engagement to a holistic approach to positive employee relations. You are likely curious about how Amazon has managed to stay union free, with employees recently overwhelmingly voting to stay union free at the Bessemer, Alabama distribution center. The answer in a few words is Amazon stayed union free by using a holistic approach that was based on genuine inclusion, worker independence and employee empowerment to control their own future. The company statement said, “Amazon didn’t win — our employees made the choice to vote against joining a union.” That is this new Proactive Era in a nutshell.

The Proactive Era: Your Roadmap 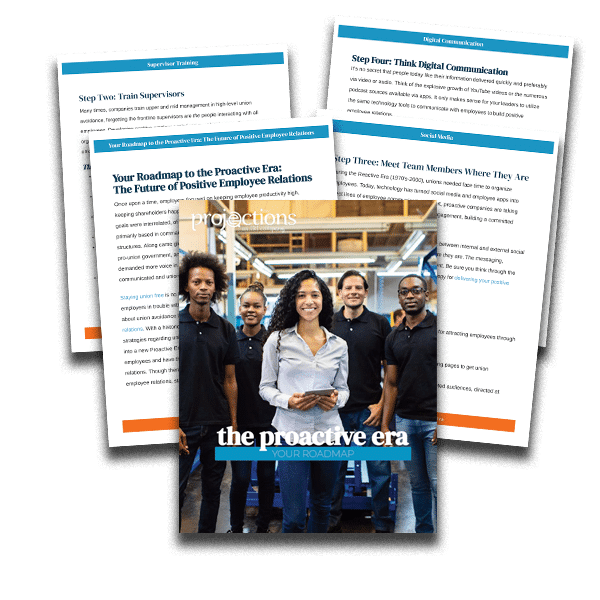