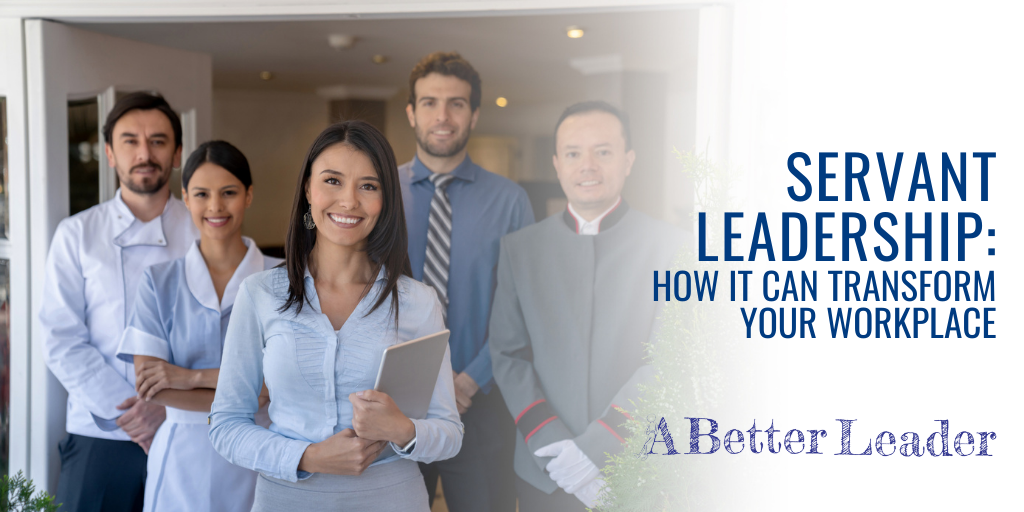 How Servant Leadership Can Transform Your Workplace

As Greenleaf stated, “The servant-leader is servant first… It begins with the natural feeling that one wants to serve, to serve first. Then conscious choice brings one to aspire to lead. That person is sharply different from one who is leader first, perhaps because of the need to assuage an unusual power drive or to acquire material possessions…The leader-first and the servant-first are two extreme types. Between them, there are shadings and blends that are part of the infinite variety of human nature.”

What is a Servant Leader?

So what does a servant leader look like in the workplace? How does a leader “serve” their employees, coworkers, and teammates? A recent interview with John Eades, CEO of Learnloft, explained three main character aspects that a leader should embody: inspire, empower, and, most importantly, serve. Leaders need to work for their people. You need managers and supervisors who have the emotional intelligence to exhibit the traits exemplified by servant leaders.

Servant leadership requires the ability to understand what other people are going through and values their employees and team members’ input. Since they have this understanding of others’ emotions or feelings, their ability to connect more profoundly is apparent from their leadership, which shows enthusiasm in helping others.

It goes without saying that a servant leader has integrity. They are authentic and trustworthy. If they say they will do something, you can have faith that it will get done. They have strong principles, and a moral compass that guides their decisions.

Additionally, servant leaders listen to others. They let their employees, team members, coworkers, etc. know they are respected and heard, without interruption or distraction. They focus their attention on the person speaking to them, not on other tasks or activities.

Servant leadership does not always mean walking around with a smile on your face. However, it does mean that you can focus on the positive rather than the negative to help lead your employees and build a community that has happier, and therefore more productive, employees.

Dave Ramsey is one of the best examples we could have chosen to exemplify servant leadership. Ramsey is an author, radio show host, and businessman who has made it his life’s mission to empower people to get out of debt and control their finances. He has created financial freedom tools, budgeting, and takes difficult money questions on his daily radio show.

After a question from a caller, a supervisor in a distribution center, about how Dave would begin to change the culture in his workplace, Dave had a beneficial and lengthy response — but ended it with this. “Quit being bosses. Be leaders. That entails servanthood. Servanthood simply means you use the Golden Rule. Before you do something with the team, you think about how you would feel if you were them. Every decision goes through the Golden Rule paradigm. That causes you to serve. Just love your people well. You’ll change the culture over time doing that. It really can be done. Corporate America’s forgotten that, but those of us who run small businesses know how to do it. We do it every day.”

Bob Chapman, CEO of Barry-Wehmiller, obtained the leadership position at a very young age after his father’s passing. Initially, as he explains in his book, Everybody Matters: The Extraordinary Power of Treating Your People Like Family, his primary focus was, understandably, growing the financial success of the company. Considering the company now has over 100 locations and has acquired more than 80 companies, Chapman did an excellent job.

Ultimately, he realized that it was far more important to make sure his employees felt like their work mattered, and aimed to create a work environment where they all felt respected and had a chance to “develop their gifts.” He has transformed the workplace culture of the business and now shares that “At Barry-Wehmiller, we measure success by the way we touch the lives of people.” Chapman is a great example of putting employees first in order to create a business that thrives.

Another powerful example of servant leadership is a very popular fast food chicken restaurant. The former CEO of Chick-fil-A, S. Truett Cathy, who passed away in 2014, exemplified a servant leader’s qualities as he ran the business. Cathy did not open his restaurants on Sundays because he believed his employees deserved a day off each week, despite the billions of dollars that could be lost due to remaining closed on that day.

Cathy stated, “I’d like to be remembered as one who kept my priorities in the right order. We live in a changing world, but we need to be reminded that the important things have not changed. I have always encouraged my restaurant Operators and team members to give back to the local community. We should be about more than just selling chicken, we should be a part of our customer’s lives and the communities in which we serve.” Truett Cathy was a servant leader who reminds us how important employees and team members are to a successful business.

If you’re not already convinced by the qualities of servant leaders and some examples of them in business today, this will help explain why servant leadership is so critical in business. Entrepreneur.com shared an article that showed the results of a University of Illinois at Chicago Business School 2018 study at a food chain called Jason’s Deli, that consisted of 961 employees at 71 different restaurants in 10 metropolitan areas. Among those restaurants, the stores with servant leaders showed six percent higher job performance, an eight percent increase in positive customer service ratings, and a whopping 50 percent higher staff retention rate. What could a 50% increase in retention do in your organization?

As you can see, servant leaders end up having thriving organizations. This comes as a result of focusing on the happiness, health, and well-being of their employees and team members. They are empathetic individuals who lead with integrity and treat others with respect and kindness. Servant leaders believe that good leaders don’t “go first” but rather put others’ needs before their own. They have emotional intelligence and build strong cultures in the workplace.

If you have struggled to build a respect, honesty, and transparency culture, look no further. A Better Leader specializes in online leadership training that improves employee engagement and retention rates. This training also helps you connect with your leaders — so they can better connect with your employees!