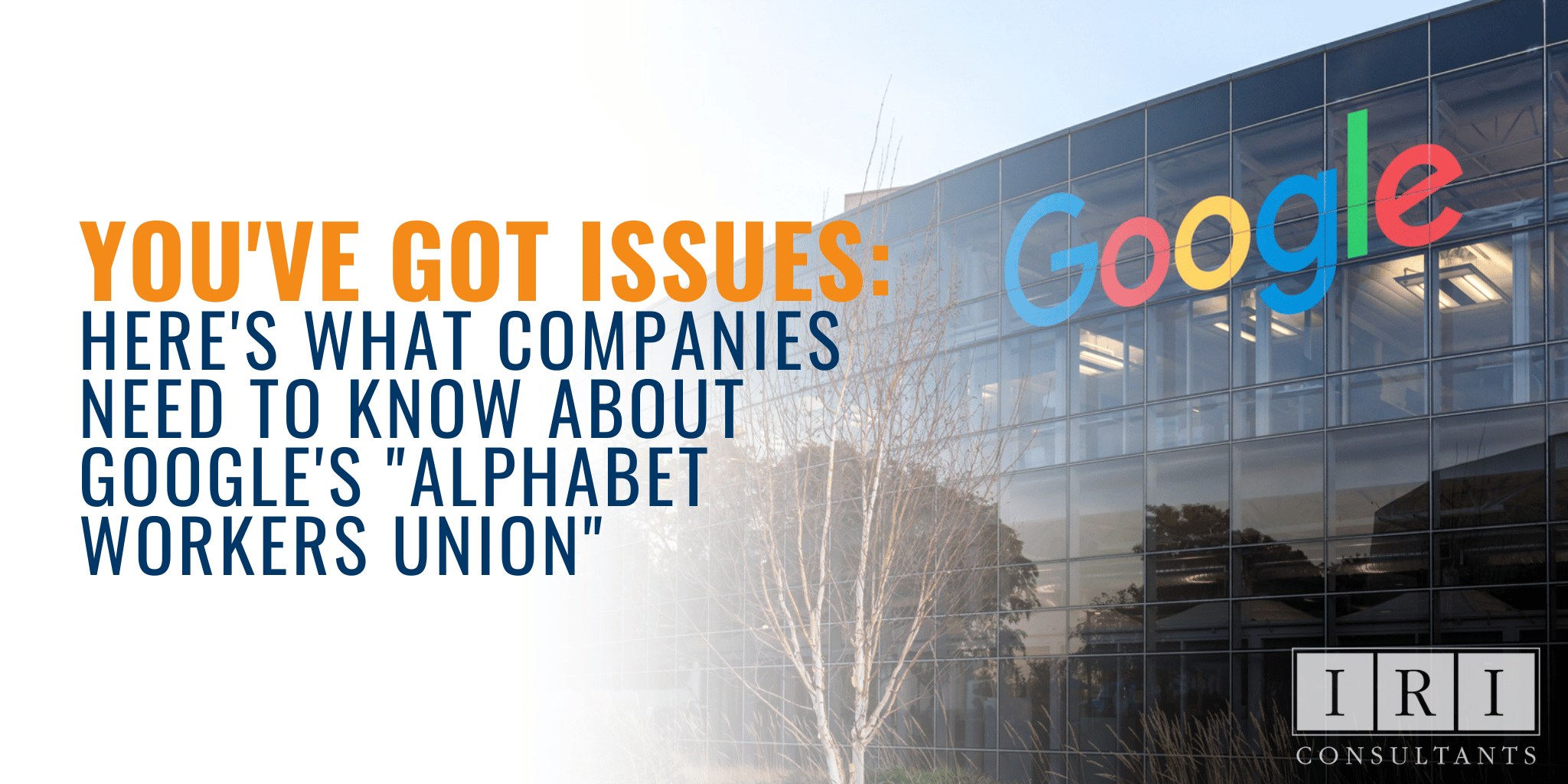 Table Of Contents
1
Not a Real Union but a Union Just the Same
2
Here to Stay and Grow?
3
Non-Traditional Drivers of Unionization
4
AWU is a Formal Culmination of Past Informal Efforts
5
Striking a Balance
6
Management Mindset

Early January 2021, two Google software engineers made a startling announcement. They had formed a union: the Alphabet Workers Union (AWU). This is not a National Labor Relations Board sanctioned labor union, though. It's a minority union or a members-only union – a new brand of organizing that appeals to white-collar workers, tech workers, and independent contractors (gig workers). There was no need to sign union cards, petition the NLRB and hold an election.

It was kind of like joining a club. You agree to join and pay some dues, which are to cover mostly legal fees and organizing costs. Of course, a labor union helped the Google employees organize in secret. In this case, it was the Communications Workers of America (CWA). For a year, activist employees worked with the CWA on structure, recruiting, and keeping efforts secret from Google's leadership. Then on January 4, 2020, the Alphabet Workers Union (AWU) was announced.

Not a Real Union but a Union Just the Same

This is an unusual union because it is a non-contract union. Though 225 Google employees signed union cards with the CWA, the AWU only has NLRA collective bargaining protections and isn't legally certified by the NLRB. Anyone who works for Google in North America (all 120,000) can join. "Anyone" means full and part-time employees, temporary workers, vendors, and contract workers.

Of course, the CWA hopes the Google employees will eventually become card-carrying, full dues-paying members. The AWU is part of the Coalition to Organize Digital Employees (CODE-CWA) project and belongs to CWA Local 1400. The AWU will elect representatives, make decisions democratically and hire professional organizers. The union doesn't have a democratic mandate because most employees didn't vote to designate it as their exclusive bargaining representative. So unlike a "real" union, the AWU can ONLY speak for its members.

The AWU membership is growing rapidly. As of January 24, 2021, membership has grown to 700 members in three weeks. The AWU website says members are "from Alphabet subsidiaries, TVCs (members of the temporary, vendor, and contractor workforce), both tech and non-tech job families, and people located all over the US and Canada." One of the reasons a members-only union works best for tech workers is that employees are dispersed across the country. The traditional NLRB process would restrict who can join based on their location or job description.

Here to Stay and Grow?

This all presents some interesting and sometimes puzzling scenarios. The AWU can't speak for all employees yet is getting enormous media attention, making it seem as if they do. Employers don't have to bargain with a minority union, but they can't ignore them either. The AWU talks publicly about the lack of management response to employee issues, harming the company brand and reputation like a true union would do.

But here is another puzzle. The AWU pays dues, but only one-percent, whereas the union dues to belong to a real union like the Teamsters is 2.5 percent. If this form of unionizing is successful, then why should employees join a real union and pay union dues and accept forced representation for themselves and anyone in the bargaining unit? The labor union's intent to grow its membership base and revenues may not become a reality should minority unions grow. The potential is there for members-only unions to interfere with the traditional labor unions' efforts to grow once again.

The Google engineers formed the AUW for very different reasons than the traditional union issues. Even the claims that seemed standard are not. For example, the employees claim that Alphabet's management has been unresponsive to employee issues over the past years. Still, this time the very modern issue concerns how management has handled sexual harassment allegations.

But what makes this particular situation very different is the fact it portends big changes in workforce expectations as to their power to have a strong employee voice and influence in critical areas, like where a company invests resources; the type of projects conducted; the governmental and private partnerships a company forms; and the company's ethics. It has always been managers that almost exclusively make these decisions.

The AWU members do not talk about pay, benefits, grievance procedures, and seniority rights for employees. They are talking about things like:

The Alphabet Workers Union may not be traditional, but it sure sounds like on. Its website says, "To fight the systems of oppression that persist to this day, we stand in solidarity with workers and advocates everywhere." This is the language of unions.

AWU is a Formal Culmination of Past Informal Efforts

The AWU formalizes what has been happening over the last couple of years. In 2018, Google employees walked out to protest sexual harassment. In June 2019, Googlers Against Racism got over 1,000 employee signatures on a Coworker.org petition to urge Google management to take steps to promote diversity and end police contracts. Then, in August 2019, Google employees circulated a petition asking Google not to bid on government contracts they believed contributed to social injustice.

When Timnit Gubru was fired, it was the mobilizer for taking action. Gebru was a Google artificial intelligence researcher who raised ethics questions about AI in a paper authored by six people from Google and academia. A manager requested she removes her name or issues a retraction. She refused and was terminated. The reaction was swift and in defense of Gubru because she didn't criticize Google or the company's work in the paper. She addressed potential bias in AI.

Recently, the NLRB issued a complaint in December 2020 that accused Google of unlawfully monitoring and questioning a few workers and then firing them to protest company policies and organize a union.

The AWU suits a tech company because so many temporary and contract workers are employed. They cannot organize in an NLRB-recognized union right now. That could change over the next four years as a pro-union Democrat-held Congress pushes for unions with legislation like the PRO Act. The AWU can accept anyone's membership, which gives it a massive advantage over a traditional labor union. The organizing was done in secret by using social networks. There were no public union organizing rallies – just a one-by-one sign up until the announcement in January 2021.

Looking at the reasons the AWU formed makes it very clear that employees expect to be participants in decision-making and have a say in critical issues like who the company does business with and how it handles workplace issues. Employees increasingly act more like shareholders than traditional workers. Meredith Whittaker, one of the 2018 Google walkout participants, told The Verge, "I'm not interested in a movement about kind of tea workers have in the free snack kitchen. This is a fight for power over everything at Google – what they build, how they treat people, whether certain parts of the company should exist."

Like shareholders, employees want a vote on how a company is run. The AWU is like a metaphor for the group of non-controlling shareholders who show up at a Board of Directors meeting to demand the company end an environmentally damaging project or protect human rights in the supply chain. The AWU showed up to demand the company listen to its employees about critical issues like justice and equality, workplace harassment, discrimination, ethics, corporate culture.

As an employer, you are at a critical juncture. You must find the balance between giving employees a voice in decision-making without giving up your right to make the final decision. Employers must increasingly treat employees like shareholders, who have the right to give input and have a "vote" to express an opinion but don't have the final say. The global employment law firm Littler pinpoints the difficult challenge employers face by pointing out that members-only agreements are not unlawful under the NLRA, but "…companies need to develop ways to strike a balance among rebuffing these groups' demands, maintaining credibility within a workforce that consists of activist employees, and also, maintaining credibility with broader external audiences that are watching to see how the company reacts."

What a challenge! "The path to finding the balance is by developing positive employee relations, utilizing all the strategies and tactics that promote strong employee engagement through effective leadership," says Jennifer Orechwa, Chief Operating Officer at Projections, Inc. "When employee relations are built on a positive foundation, employees can respect and understand decisions, even when they don't agree with them. The reason is simple: there has been good communication between management and the workforce. Communication, including feedback, is a key element of positive employee relations."

One of the major reasons the AWU formed was because employees believed management was unresponsive, meaning there was a lack of communication.

If you're looking to foster a positive workplace environment where unions simply aren't necessary, we're here to help. We're just a click away!

Following are some best practices in treating employees like shareholders. They will look familiar because they are precisely what each organization should be doing to stay union-free.

Frankly, fostering employees as shareholders comes down to effective leadership communication. You need emotionally intelligent leaders, problem solvers, uniters, and good communicators. Not all of the AWU issues revolve around people merely feeling like their concerns are ignored. As employees become social and workplace advocates and utilize the power of social media to drive change, managers will need to approach their workforce with a collaborative mindset.