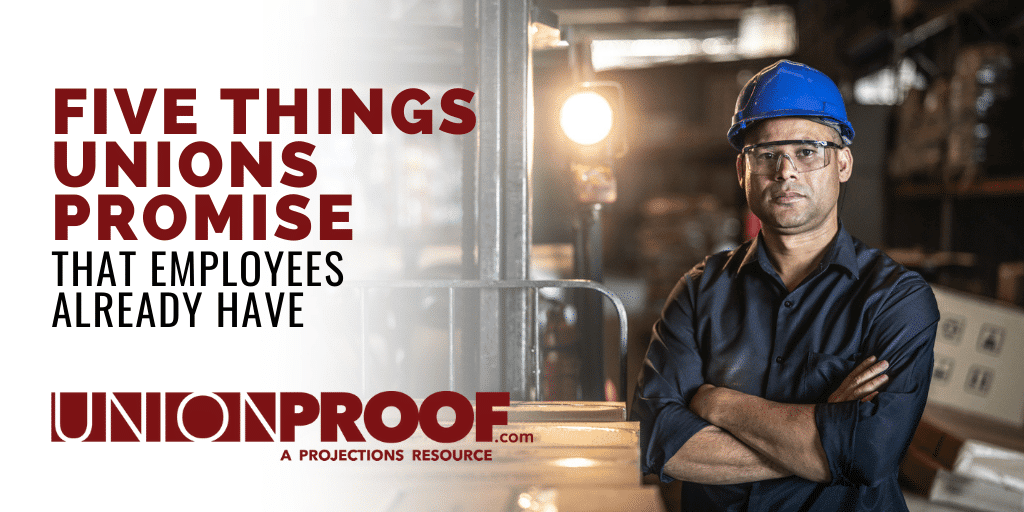 It can be challenging to convince employees that staying union-free is in their best interest. It’s one reason UnionProof and A Better Leader have developed a wealth of resources for employers. It’s clear that there are many things unions promise that employees don’t realize they already have access to, and employers don’t always know how to share this information. There are several ways to approach the challenge, like telling employees the truth about unions and their tactics, training leaders in communication best practices, and focusing on employee engagement to build trust between employees and management.

There is another union avoidance strategy to add. Remind your employees that they already have many legal rights. They don’t need to pay unions or give up their right to talk directly with management about issues and grievances. One best practice is to develop a webpage of legal resources that employees can access, adding strength to the idea management fully supports employee rights and cares about their welfare. You can hang posters or add the resources to your union-free website (aka “dark website”) or use other communication channels. Of course, you don’t want employees filing complaints with government agencies, but you also want to stay union-free. A single government claim can get resolved, while the union will interfere in your business for years.

Back to the Future

Just about any union you choose will have a laundry list of items the union says it wants to get for its members. They are still reminding people that union representation was the driving force behind the end of child labor, grueling workweeks, and unsafe sweatshop conditions at the turn of the twentieth century. An AFL-CIO founded nonprofit organization suggests that, if left up to employers, the workplace would look like the early nineteenth-century workplace again!

The reality is that unions did help workers over a hundred years ago by bringing poor employer practices into the government’s line of sight. Still, they have failed to adapt, partially explaining the declining membership trend. Today, there are now numerous laws and regulations and government agencies that protect workers. They address the very issues unions have continued to leverage for recruiting members.

What unions continually fail to mention is that the union promises guaranteed employee rights already given to employees either legally or by their employer. A union avoidance strategy is to educate your employees on their non-union options to resolve issues. This presents a different type of approach to reduce union vulnerability.

The following are five things union promise that are already covered by numerous laws and a changing set of social and workplace norms.

The Occupational Safety and Health Act of 1970 established employees’ rights to a safe and healthful workplace and covers private and government workers. Employers must provide employees with a workplace that is free of known dangers.

Employees have a legal right to file a confidential complaint with OSHA, review the employer’s records of work-related injuries and illnesses, file a complaint if an employee is retaliated against for asking for an inspection, and more.

The Environmental Protection Agency (EPA) works with OSHA to identify safety concerns. Employees can send complaints about the health or safety of working conditions to the EPA.

Why should employees pay union dues for a process they already have a legal right to?

ANY injury, illness, or death is unacceptable to an employer and employees. OSHA says it makes a difference, and that’s precisely why unions are not needed. Workers have rights per Federal law, which entitles every employee to a safe workplace. Employers are required by law to keep health and safety hazards out of the workplace. If they don’t, they significantly increase their union vulnerability and subject themselves to enormous government fines.

For all the union demands for things like increased employee voice in the workplace and an end to financial and emotional abuse of employees, the truth is unions usually focus on increasing compensation and benefits, even if it threatens the financial health of the business. In many instances, employers already offer generous benefits. Benefits are used to attract and retain talent and to become an employer-of-choice.

Walmart is a good example. It gives full- and part-time employees health care and benefits options, including retirement plans. Walmart is a large company, but change is transforming companies of all sizes in the benefits arena. For example, a new tech-platform CareerGig is making traditional benefits, like health insurance, available to freelancers.

There is more than one way to get benefits for temporary and contract workers too. Google requires staffing companies that supply their contracted and temporary workers to provide health benefits. Contractors must also get 12 weeks of paid parental leave and tuition reimbursement.

The movement towards providing some level of benefits to part-time, temporary, and contracted workers is currently mostly at the state and municipal level. For example, Arizona passed the 2017 “Fair Wages and Healthy Families Act” which requires full-time, part-time, and seasonal employees to receive paid sick leave. Your state may be one of the leaders in adopting new legislation. If so, promote it!

Each company makes a decision as to the benefits it offers and who is eligible. However, even if you still don’t offer any employer-sponsored benefits like health insurance and sick leave pay to all your workers, you can help them access the resources available. You can also promote any perks you do offer – subsidized life insurance, paid vacation, 401(k) matching contributions, college savings plans, tuition assistance, on-the-job training, health and wellness programs, recognition and rewards programs, and all the others.

Union members do earn higher average wages than non-union employees. However, as UnionProof has discussed, there’s a lot more to the story concerning union wages. It’s an average number, meaning not all employees earn higher compensation just because they are in a union. However, saying that without further information or thought leaves out critical need-to-know information. A union avoidance strategy is to transparently discuss compensation, and the laws impacting employee rates.

An example of an economic force is the growing need for people with tech skills who can demand higher compensation. Employees who continuously strive to improve and develop their skills, including taking advantage of workplace training opportunities, have the ability to earn more.

The Fair Labor Standards Act (FLSA) of 1938 established child labor laws that restrict the hours youth under the age of 16 can work and prohibits them from working in hazardous occupations. The FLSA protects people from abuse by establishing a federal minimum wage, overtime pay and record keeping requirements, and more.

There is the U.S. Constitution, the American Disabilities Act, the Civil Rights Act of 1964, the Age Discrimination in Employment Act of 1967, the Equal Pay Act of 1963, and a host of state laws protecting people’s human rights.

There are numerous agencies at the federal and state levels guarding people’s human rights.

Providing balance is the fact younger employees don’t want to work 70+ hours, the new “sweatshop” condition in modern times. Millennials especially have made it clear they want work-life balance. They see it as a right. For employers to remain competitive in the labor market and retain talent, they must address the values of their multigenerational workforce. Social norms and values bring change.

One of the things unions promise is safe working conditions, but the bottom line is that employees don’t need to pay union dues to protect their human rights. However, the ideal situation is that your employees feel free to discuss issues or grievances directly with management via an open-door policy rather than fall back on the law.

5. Raise the Standard of Living for the Working Class

Brad Schiller is an emeritus professor of economics at American University, and he provided some clarity on measuring the middle class. First, comparing households over time requires looking at identical households, which is not the typical formula. Fifty years ago, 15 percent of U.S. households had a single occupant. By 2017, that number was 28 percent. Single households have a median income of $36,000 while married couple households were at $90,386. So mathematically, the average median income will decline as more single-person households increase.

This is leading to the fact that most single-person households are not worse off. Many are younger generation workers who moved into their own apartments. Others are retired people, many who still work part-time, and divorced people. They aren’t worse off because they can afford to live on their own at a lower income.

Many people in the lower-income group are just starting out and building their careers. Schiller points out, for example, that immigrants who take their first minimum wage job may cause the median income to decline, but they aren’t stuck there. They can get an education, take advantage of job training opportunities, and gain work experience that enables moving up the income ladder.

Median income may not go up even when current workers increase their income because new labor force entrants are just starting out at the bottom of the pay scale.

Some research indicates support for unions is growing, yet union membership is declining. Gallup research found 65 percent of Americans approve of unions. But the Department of Labor reported union membership declined in 2019 and now only accounts for 10.3 percent of the workforce.

Why? The obvious answer is that today’s employees understand they can demand change as a group and don’t need labor unions. Why should employees pay a union to do what employees can do themselves? Employees can approach management, express their concerns, ask for change, and utilize their legally protected rights per the law to pursue issues still needing resolution. A key element is employee engagement built on trust between management and employees.

It’s important to understand that many of the things unions promise are already available to employees, through their employer or through labor laws. Effective leadership communication is the foundation of staying union-free. UnionProof and A Better Leadership, in conjunction with Projections, Inc., partner together to develop high-quality communication resources addressing everything from staying union-free to increasing employee engagement. Resources are available in a variety of formats, including video, web, eLearning, and print.