Where Do My Union Dues Go? Labor Spending Revealed 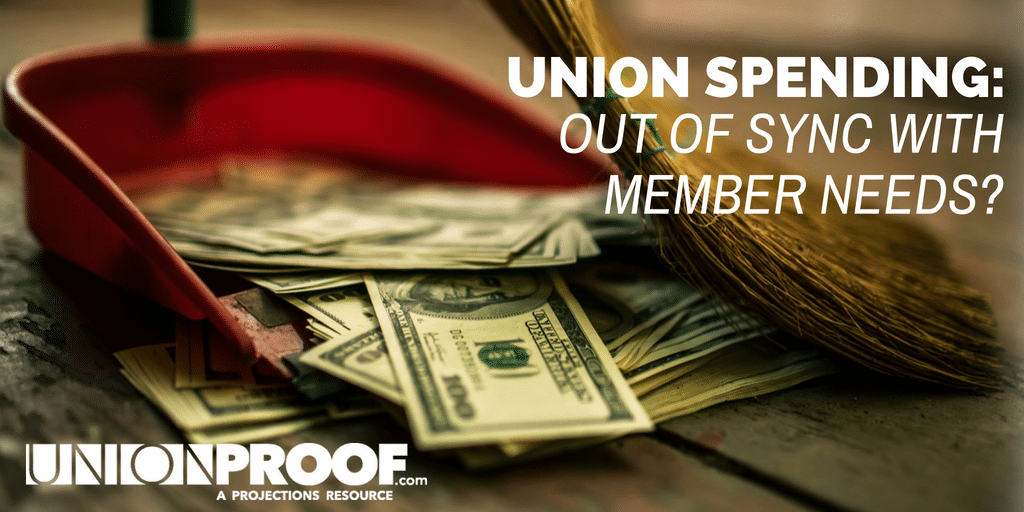 Where Do My Union Dues Go?

Employees may find themselves at some point wondering, “where do my union dues go?”. Inquiring as to where one’s own money is being spent is an understandable question. Many are unaware of the true cost of unionization. Unfortunately, as with any bureaucracy, finances are a sticky talking point. So let’s dive into the history of labor union spending as we venture to answer the question, “Where do my union dues go?”

In 2018, the Supreme Court decided that public employees don’t have to pay “agency fees”, which are mandatory partial union dues for non-union employees. This decision was made ostensibly to defray collective bargaining expenses. The unions, of course, cried foul because this decision will cost them millions of dollars, decrease union spending, and eventually they’ll lose millions of union members. So the question remains, why pay dues if you still get collective bargaining representation?

Of course, the unions are anxious to replace the lost dues, claiming the money is needed for union salaries, working on grievances, collective bargaining negotiations, and other expenses. The reality is much different. Unions spend tens of millions of dollars in union dues and agency fees for things many of your employees don’t support or approve of; like a particular party or candidate, gun control, and other political and ideological activities.

Rewind to 1985, Pattern Makers v. NLRB, 473 U.S. 95, the Supreme Court decided that no employee can legally be forced to join the union in any state, a fact often overlooked in many discussions and one that unions won’t tell your employees. The NLRA law also allows people, called objectors, to refuse to join a union but to be forced to pay the agency fees or be fired. This is called the “Beck right” as a result of a Supreme Court decision in Communication Workers of America v. Beck, 487 U.S. 735 (1988). This is the backbone of the union-related laws in the Non-Right-to-Work states where union security agreements (collective bargaining agreements) are allowed. Employees can refuse to join a union but be required to pay agency fees.

Union fees aren’t the same as union membership dues, by definition. The agency fees are supposed to equal only the amount unions spend on collective bargaining, grievances, and contract administration. That’s it. The agency fees are to cover the union organization’s overhead only, and unions are prohibited from spending these funds on political activities. The reality is that union spending is not compliant and is usually illegally spent on political activities, and all types of union money are frequently used to support causes and organizations their members don’t support.

The unions use a labyrinth of money transfers that include union dues and agency fees to various left-leaning organizations to hide the fact they’re paying for political campaigns, political party support, and lobbying. These expenditures aren’t only illegal when they include agency fees; they are frequently spent with disregard for the opinions and preferences of the employees footing the bills.

RELATED: HOW TO BUILD YOUR UNION PROOF CULTURE FROM DAY ONE

The truth about union spending is coming out as various court cases and researchers dig into the numbers. The Competitive Enterprise Institute (CEI) had submitted a brief in the Supreme Court case of Janus v AFSCME, Council 31. This is the case that recently ended the requirement that public employees pay agency fees against their will. CEI research revealed staggering information about labor union political spending. According to their findings, AFSCME was spending agency fees to advocate for a variety of political and religious issues including overturning Right-to-Work statutes, gun control, Hillary Clinton’s presidential campaign, voter registration, D.C. state-hood, trade deals, and subsidizing of union organizing campaigns.

The Center for Union Facts reviewed the annual financial disclosure reports for the period 2010 to 2017 that unions filed with the Labor Department. The results are a bit shocking. Labor union political spending amounted to $1.3 billion of union dues that were allocated to political activities, activist groups, media organizations, and nonprofits. And if you’re wondering exactly how much money do unions give to Democrats? The answer is over $400 million went to Democratic organizations that include America Votes, the Democratic Governors Association, Catalist, the Economic Policy Institute and the list goes on. Yet, approximately 40 percent of all union members and their household members vote Republican. Funding for Planned Parenthood is even on the list, thus impacting employees’ religious rights. The unions have publicly admitted they spend money in a way that doesn’t consider the viewpoints of its members.

Wasteful union spending is par for the course. The NFL Players Association (NFLPA) spent more than $3.5 million to defend quarterback Tom Brady against a 4-game suspension. This was the arbitration case called “Deflategate” in which footballs were found to be deflated. The union spokesman says the legal fees weren’t funded by employee dues, but rather by royalties paid to the union for NFL items sold. However, how would some of your employees, union members or not, feel knowing the unions are willing to spend such extravagant amounts for such a situation. It reflects a very poor judgment on the part of the union leaders.

In 2017, the SEIU revealed how it spent union dues in 2016. Even labor union political spending proved to be extravagant and wasteful. Expenditures included:

Approximately 64 percent of SEIU members are conservative, per SEIU President Mary Kay Henry who, by the way, earned $262,000 in 2016.

RELATED: THE EMPLOYEE EXPERIENCE YOUR PATH TO HIGH ENGAGEMENT

The union voice is often out of sync with the voice of members. In fact, the way the union spends money serves as an effective silencer. There are union members from coast to coast fighting their own unions to stop the extravagant spending and the spending of union dues and agency fees on political activities and other issues not related to collective bargaining processes. Their voices are often like cries in the night because no one is listening, and the unions are quite blatant about their public bent. If you remain doubtful, consider what Alma Hernandez, Executive Director of the SEIU, said before the Janus case was decided. “The threat to organized labor is a threat to all of us, in particular to the Democratic Party.” Your Republican employees don’t see it that way.

Tell your employees, when sharing the company perspective on unions, that voting for a union could very well equate to voting to have their hard-earned money spent to support causes and events they don’t agree with and will never be informed about. The numbers prove it’s a fact. It’s just another reason to equip yourself with all the tools necessary to keep your organization union-free, and to train your leaders to engage employees through transparency and frank discussions about unions. Don’t wait to educate your supervisors and team members on the realities of unions, while you remain transparent and authentic in creating an environment where unions simply aren’t necessary.