What is the Impact of the Gig Economy on Unionization? 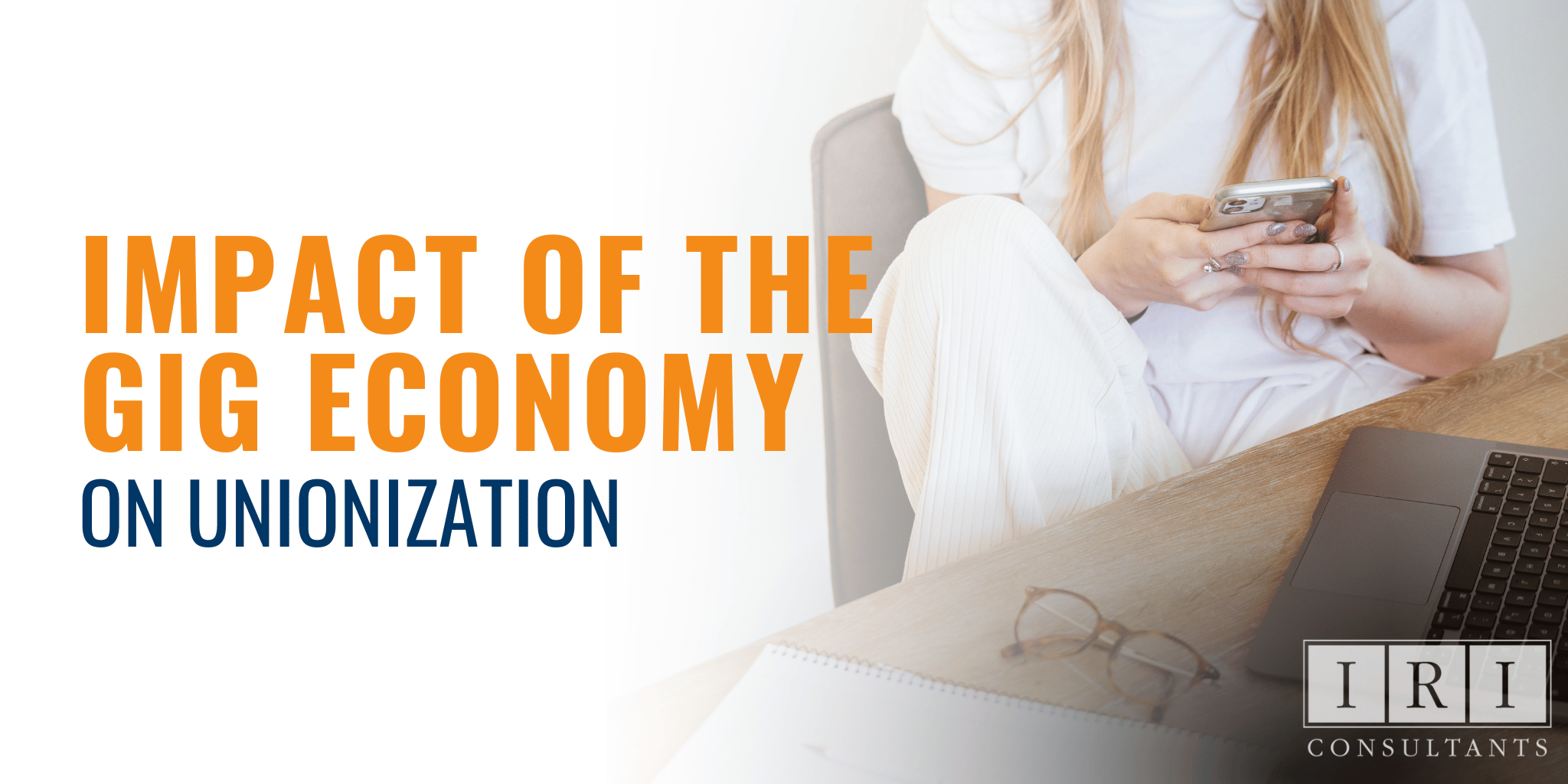 What is the Impact of the Gig Economy on Unionization?

The term "gig economy" evokes images of app-driven tasks completed by people earning their income one task at a time. Independent workers, like Uber drivers and food deliverers, will get an order via smartphone, complete that order, and move on.

It doesn't seem applicable to an industry like manufacturing, which is heavily unionized, but the gig economy is invading every industry as technology is embedded deeper and deeper into society. There is a growing trend, fueled by big unions, to turn gig workers into employees. This, in turn, makes them more accessible to unions. Even if already unionized, keeping union membership to a minimum in the future is becoming more challenging each year. We'll discuss the impact of the gig economy on unionization and how it can affect gig workers and companies alike.

At UnionProof, we have over 40 years of experience connecting with employees. We are dedicated to helping companies create their own unique positive employee relations strategy. Our dream is to revolutionize the way companies connect with their employees. We offer companies trusted, innovative, comprehensive, employee communication resources that keep them union-free while inspiring and motivating their employees.

Think in terms of a manufacturer producing a certain amount of products. When the order or project is completed, the workers leave for new jobs as independent contractors. The workers are gig workers, many of whom purposefully decided to become a gig worker for work-life balance reasons. They aren't forced into this type of work. They choose it, and that fact often gets overlooked when listening to union representatives speak about the gig economy.

Technology is usually the reason gig work is possible in any industry. Focusing on manufacturing, programs, and robotics simplify work, making it possible for independent workers to step in and complete the job. But the manufacturing industry is rooted in tradition and unions that have established rules for career paths.

It is the perfect setup for a clash of the independent workers and the union workers who jealously guard their traditions and contracts. In the traditional model, union workers go through a career journey of apprentice, journeyperson, and master, with pay and promotions tied to status.

In the new model, it goes like this: worker, team leader, and manager. Workers (and sometimes team leaders) include full-time and part-time employees, temporary workers who may or may not hope for regular employment, and gig workers or people who purposefully go from job to job. Gig workers serve an important role because they can fill skills gaps.

The ABC's of Employment

Unions, of course, want to unionize gig workers because they need to shore up declining membership. The AFL-CIO is working through legislators to get laws passed that force gig workers to be treated as employees, making them eligible for unionizing. For example, California Assembly Bill 5 (AB5) (2750.3 of the California Labor Code) went into effect on January 1, 2020, and requires businesses hiring independent contractors to reclassify them as employees. This was based on the California Supreme Court case of Dynamex Operations West, Inv. vs. Superior Court of Los Angeles.

The law is a precursor to what unions hope to get in other states. As the law reads, anyone hired is assumed to be an employee, unless the business can prove the following. This is also referred to as the ABC test:

The way the law is written, it is nearly impossible to remain a gig worker. A gig worker accepting a job in manufacturing will, of course, be doing work that is usual for the company nearly all the time.

For example, the company couldn't hire web developers to develop new product webpages on a gig basis, if they usually have web developers working the rest of the year. The gig worker will also need direction. There are some occupations exempted in AB5, but the requirements to prove independent contractor status is a legal quagmire, leaving unions open to challenging just about any gig worker.

The success unions had at getting the California legislation passed encouraged them to work for similar legislation in other states. In fact, Illinois has already passed a similar law, and New York and New Jersey are working on it. The unions are focused on states right now that just so happen to be high-level manufacturing states.

According to Industry Week research, Illinois has 36 manufacturing companies, and New York has 33, putting both of them in the top 5 manufacturing states. New Jersey is another state with similar legislation. It has the most manufacturing firms, with their employees accounting for 7.72 percent of the workforce in 2019.

You can bet that gig workers in manufacturing will become employees should these laws pass. A lot of people don't like California AB5. There are dozens of amendments to the bill proposed already, mostly to add occupations to the list of exemptions, according to the Los Angeles Times. No one knows whether the challenges will succeed as unions furiously lobby legislators.

There are some freelancers who make it clear they are not interested in being anything other than independent contractors. The unions assume everyone is interested in things like job security and benefits. It's not true.

In fact, there is a group called "Fight for Freelancers NJ," and it discusses the belief that the N.J. legislation "destroys the careers of people who choose to work for themselves based on the ABC test" because the ABC test is "so strict, and can be interpreted and applied in such wide-ranging ways, that honest and lawful companies are refusing to work with properly classified independent contractors."

Though the economy was interrupted due to COVID-19, it will rebound at some point in 2020. When it does, there is likely to be more manufacturing production gearing up over time as Americans generally agree there's a need for more goods produced at home. This will, in turn, require more skilled labor, and manufacturers need a new source. Gig workers or independent contractors will be that good source.

What is the impact of the gig economy on unionization in manufacturing? At Union Proof, we anticipate two opposing forces. The need for independent contractors will lead to unions working harder behind the scenes as lobbyists to change state laws to make it difficult to stay a gig worker. Many freelancers will fight long and hard to stay freelancers.

Union membership has declined overall. However, this has made them more determined to find ways to bring more people into the union fold. It is tempting to think unions have had their heyday and will not recover their membership numbers. Gig workers are expected to play an important role in the manufacturing industry, and that's already motivating unions.

Some Thoughts on the Gig Economy

Here is a tip: Each manufacturing company, plus upstream suppliers and downstream logistics companies and business customers, need to strengthen their strategies for keeping gig workers, as well as regular employees, engaged, so they want to stay union-free. Unions are trying to engage independent contractors, meaning you should too.

It may be tempting to believe that since a manufacturing workforce is already unionized that unions don't present a new challenge. Don't make that assumption if you want to keep labor costs down and help independent contractors stay independent.

As the new laws on independent contractors already demonstrate, unions are employing strategies that create new potential members. The anticipated increased utilization of gig workers will drive the need for new strategies to stay union-free or to minimize union membership in your company.

Union Proof is always looking ahead to assess how unions are most likely to behave in the future. If you manufacture goods or supply manufacturers, business leaders should prepare for renewed union action on a new front. If you need a solution to help your organization become an employer of choice, we'd love to help you with a custom solution.