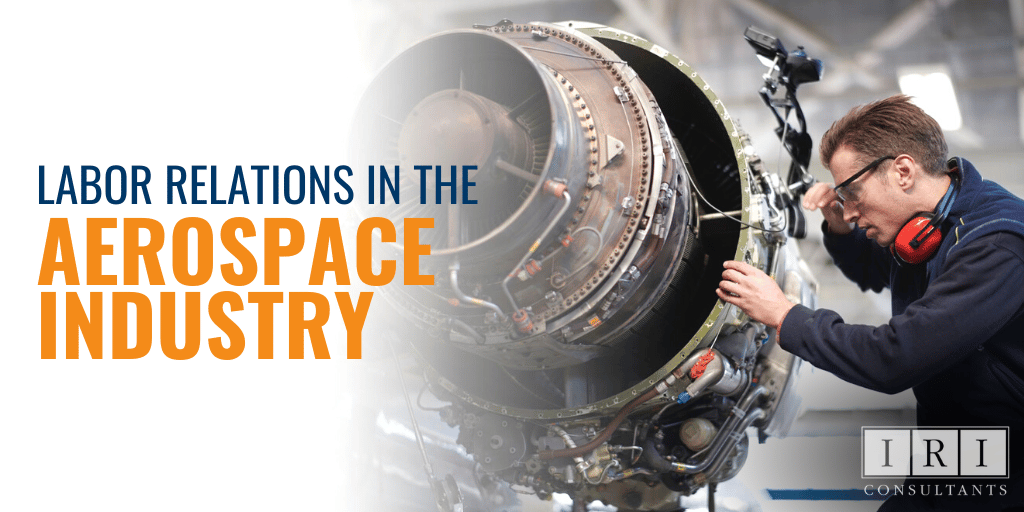 Labor Relations in the Aerospace Industry

Table Of Contents
1
Aerospace: What's in a Name?
2
Are your aerospace workers vulnerable to union organizing? Find out now!
3
Unhappy on the Job in the Aerospace Industry
4
Emotionally Detached and Miserable  at Work: Aerospace Job Dissatisfaction
5
A Case Study in Leadership Communication
6
What Aerospace Employers Can Do Now
7
Aerospace Industry in Turmoil

Labor relations in the aerospace industry has changed dramatically in recent years, but there are a wide variety of proactive actions employers can take now. Having weathered enormous turmoil through the COVID-19 pandemic, this industry has learned to minimize the impact of outside forces even as companies had to endure furloughs, layoffs, reductions in benefits and more.   As a result, today, many employers in aerospace are facing workers who are disengaged, and may be lacking skills or leadership.

What this tells us is that aerospace employers are now operating in a prime setup for labor unions to aggressively pursue union contract concessions during negotiations, and to increase membership through union organizing campaigns. To remain free of unions or to protect a company's reputation through union contract negotiations requires a carefully constructed employee communication strategy that addresses employee needs and labor-wise leadership training and development. Considering the current union activity and the words of aviation and aerospace employees, there is plenty of information available today to guide employers in developing a response to unions and strengthening positive employee relations during this period of conflict.

Aerospace: What's in a Name?

As of August 2022,  aerospace  companies employ 1.7 million people in the United States, of which 1.2 million are in production and nonsupervisory positions.. It's a large and complex  industry, that represents a wide variety of skillsets at all levels, from highly skilled propulsion systems integrators to part-time test engineers. It's significant to note that aviation and aerospace industry sectors are unique in that they each have a different focus, but they also are not entirely distinct. A machinist, for example, may manufacture parts in either sector. The Bureau of Labor Statistics has aircraft mechanics and service technician positions in the "air transportation" industry and the "support activities for transportation" sector.

The aerospace industry is considered the business that designs, manufactures and assembles aircraft, spacecraft, and missiles. It consists of aerospace engineering and operations and product and parts manufacturing. Many positions are aerospace engineers, machinists, mechanical engineers, and machine tool operators. The variety of engineering disciplines include workers in aerodynamics, aircraft design, aeronautics, astronautics, flight systems testing, rocket and wind tunnel, and satellite design and manufacturing, to name a few. Aerospace is a high-tech industry concerned with flying air and spacecraft in the earth's atmosphere and space. Its high-tech characteristics are important when discussing organization by unions such as the International Association of Machinists and Aerospace Workers (IAM).

During COVID-19, aerospace industry workers were laid off in large numbers due to fewer orders coming in. Many of those who continued working accepted pay cuts and reductions in benefits and adjusted work schedules. Since then, inflation has cut into wage increases. While aerospace engineers rate their happiness higher than other employees, the same is not true of machinists and machine tool operators in lower-level positions. Machining is a stressful job, and that makes safety a top concern. Many workers in aerospace are concerned that they are increasingly competing with advanced technologies like Artificial Intelligence (AI).

The 2021 Facts & Figures U.S. Aerospace & Defense report prepared by the Aerospace Industries Association (AIA) examined the changes and challenges the industry experienced and continues to experience.

The aerospace sector experienced a significant decline in employment during the pandemic but this trend began much earlier, with 600,000 scientific and technical aerospace jobs lost in the past 13 years. The Commission on the Future of the U.S. Aerospace Industry recommended "that the nation immediately reverse the decline in and promote the growth of a scientifically and technologically trained U.S. aerospace workforce…" adding that "the breakdown of America's intellectual and industrial capacity is a threat to national security and our capability to continue as a world leader."

Are your aerospace workers vulnerable to union organizing? Find out now!

Reading through the 2021 Aerospace and Defense report, many issues concerning employees are discussed, including job security and access to training. A survey of engineering students rated the aerospace industry low for its physical work facilities, inability to offer what they see as exciting and meaningful tasks, lack of opportunities for professional development and growth, and lack of supportive and encouraging management.

Inadequate leadership development makes it more difficult to overcome challenges in aerospace. The Commission recommended that resolving the crisis will require government, industry, labor, and academia to work together. This gives labor unions a higher profile in the industry, especially in apprenticeships and employee training.

The IAM Proposal for a U.S. Aerospace Strategy titled Rising Potential says, "The industry needs stronger collaboration between unions and industries to continually recruit and upskill workers to meet the industry's demands for today and tomorrow…. Labor unions like IAMAW champion for its members to have a voice on the job and offer the means for them to upskill as they keep pace with changing market demands."

Unhappy on the Job in the Aerospace Industry

Labor union activity is occurring on many fronts in the aerospace industry. They are informative as to the issues on which aerospace workers are focused.

Shameka, a Delta flight attendant, says, "I would like to have a seat at the table when it comes to negotiating my work group, my compensation, my work-home balance, and the only way to accomplish this is to bring our collective power to the bargaining table." 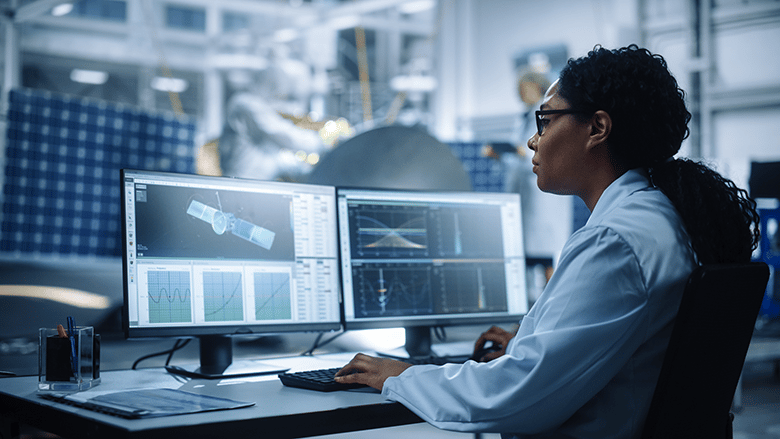 A Gallup survey found that employees in all industries are unhappy, including aerospace:

Despite the fact that employers have tried to accommodate employee needs for things like flexible schedules and work-life balance, a large percentage of workers remain disengaged and unhappy. Gallup researchers say it takes more than policy changes like fewer hours and a different work location. As IRI Consultants advise clients, what matters is the employee experience, referring to how employees are managed, coached, and treated. The number one reported cause of dissatisfaction with the job experience is unfair treatment at work which reflects a culture that lacks respect, community, and recognition. Unfair treatment can be many things, including a perceived inconsistency in compensation, bias, favoritism, and unfair corporate policies.

Job dissatisfaction is also caused by workloads that are too heavy, lack of clear communication from managers, lack of manager support, and unreasonable deadlines. Gallup's survey found that the leader accounts for 70 percent of the variance in team engagement. There is a clear conclusion that better leadership can best address employee satisfaction.

Jim Harter, the chief scientist of workplace management and wellbeing at Gallup, told CNBC, "The role of the manager is really important in wellbeing. Their first job is to make sure the work-related things are right — people know what their role is, they get recognized when they do good work, they feel cared about at work and have a chance to develop in the future, and they can see where they're headed in the organization. If you can get those sorts of things right, you start building trust. And when you have trust, you can open the door for having broader discussions around wellbeing." Other critical leadership skills include holding meaningful conversations with employees about goals, personal strengths, and the employee as a person.

A Case Study in Leadership Communication

The YouTube video Boss Threatens to Fire All Machinists is a real-world example of the importance of leadership communication. A machinist discusses his manager's lack of support for the machinists, saying he has a master's degree in mathematics but no practical machining experience. The machinist says the manager understands "spreadsheets and power points" but doesn't know how to actually make anything.

One day the manager called all the machinists into the conference room when they usually met on the shop floor. The manager asked the employees if they had seen the new 3D printer. The machinists said it did a decent job but was "by no means an industrial printer." The manager passed around a plastic part made with the 3D printer, saying, "Engineering is unhappy with how long it's taking you guys to make your parts, and if you don't speed it up, these 3D printers are going to replace you."

With that one statement, says the machinist, the manager lost all credibility and respect from the entire team.

The machinist goes on to explain the threat was ridiculous because the department was responsible for making very precise parts out of steel, so the idea the parts could be made out of a "hobby level 3D printer" was ridiculous. You could imagine how the machinists with 20+ years of experience reacted when told a 3D plastic printer could replace them and the skills they spent their whole career developing. The machinists didn't appreciate the manager devaluing their skills. It takes a high level of skills to take a piece of metal and form it into complex machinery. "We knew he couldn't do what he said, and our boss's ignorance didn't change what was true," said the machinist.

The machinists returned to work, furious about the slap in the face. They believed they had an incompetent boss and an engineering team that couldn't comprehend what the machinists did because they also had no practical machining experience. Machinists would get a part that had three or four operations in steel with tight tolerances and have to program it, set it up, run it and inspect it in one day. For two weeks, the machinist team joked about taking the part to the manager and having him print out a plastic part.

When the owner found out what happened, the manager was fired.

Says the machinist, "To this day, that was the worst display of leadership I have ever seen. I don't know of any leadership success stories that involve disrespecting and threatening your workers as a form of motivation. If our boss at the time had inspired us to push the limits of what's possible and given us the tools to be faster and more efficient, that would have been a message that resonated with the machinists, and that would have been something I could have respected."

Managers should be inspiring people to utilize all the tools they have at their disposal and not threaten them by saying they will be replaced by technological advancements. Words matter, and they should always be labor-wise words.

What Aerospace Employers Can Do Now

So many aerospace employees are not engaged, and that is understandable. After massive layoffs, job insecurity, a need for upskilling, and a labor shortage, employees are not feeling loyalty, trust, or engagement. There are many takeaways for employers from the state of the industry based on the union activity to date, planned union activity and frustrations expressed by employees at all position levels.  Here are the top takeaways for the near future:

While the aerospace industry may be in turmoil, it is also an opportunity for employers to make changes that build strong positive employee relations. This is the time to make a sincere effort to engage employees beginning by improving communication and giving employees a voice. Employees are alienated when they believe employers are not listening to them.

Aerospace employers should assess  vulnerability to potential union organizing or strikes and protests, their own employee communication processes, and employee-related policies. Speaking honestly, even the various government and industry associations make it clear there are no simple answers, especially to filling positions requiring technical skills. That's all the more reason to partner with labor relations consultants who can help management get to the heart of the issues as quickly as possible.

Contact our team of experts at IRI Consultants for a collaborative approach to turning workforce turmoil into positive employee relations.

About the Author Mike Lake