Labor Law Violations Within The TIPS And FOE Rules | UnionProof.com 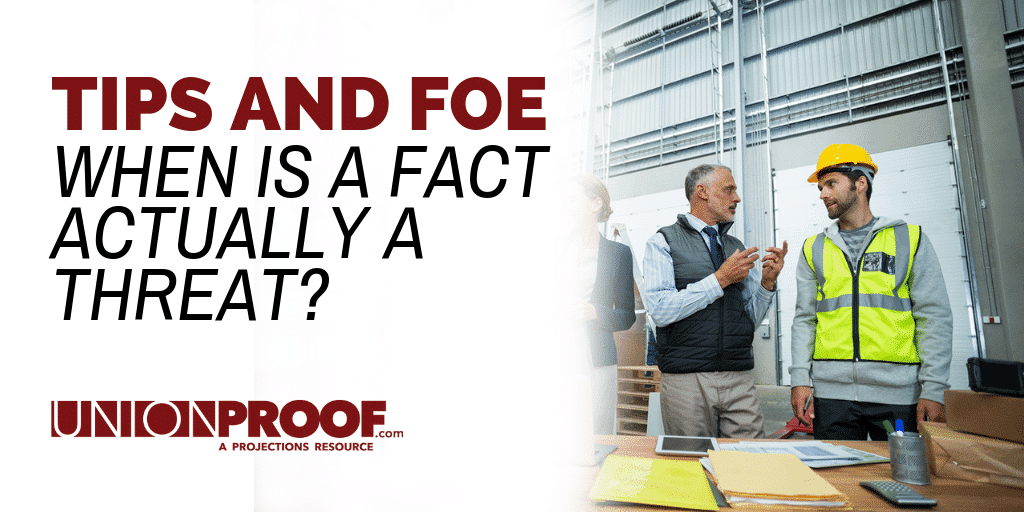 Labor Law Violations Within The TIPS And FOE Rules

The challenge of maneuvering through labor law is that you can answer employee questions honestly and still violate the NLRA. Any well-intentioned company can easily make the costly mistake of saying the wrong thing at the wrong time despite honest efforts to comply with labor law. In fact, as displayed in the below example, you can be following the FOE rules and still violate the TIPS rules. Thus proving there are indeed possible labor law violations embedded within the structure of the TIPS and FOES rules designed to protect companies.

The interesting point is that the employer said he was just telling the truth, and he was in reality. The court said the way the employer’s comments might have been viewed was irrelevant. So you can state the truth, but still be practicing labor law violations. He was following the TIPS rules while violating the FOE rules.

Remember the old saying, “Ignorance of the law is no excuse?” Nowhere is that saying more applicable than when an employer says something that can be construed as an unfair labor practice. Here’s an issue to consider though: the interpretation of the law changes from federal government administration to administration. It’s one of many reasons it’s important to get advice and assistance from a labor consultant or attorney when an employer violates the law. Better yet, it’s important to consult them on a regular basis.

Sometimes ULP charges are found to be without merit because the evidence fails to support the employee’s claim, or the NLRB has reversed or revised earlier decisions. One thing you can count on is that the union will ensure the employee exaggerates the ULP charge. Unions know all aspects of the law. You can find yourself at a distinct disadvantage if you don’t have a labor professional helping you.

Labor law violations, especially violating the TIPS rule, is serious and expensive business, but the consequences can be minimized with careful handling. Avoiding future labor violations is critical too. Employees have six months to file an ULP. Racking up a series of incidents that violate Section 7 rights will support the employee’s charge that you are actively working to discourage unionization.

In the AutoNation case, the manager made multiple statements in one meeting that blatantly violated Section 7 rights. One violation may be a slip-up or demonstrate lack of knowledge. A series of statements indicates the employer really doesn’t care about the law in the interest of keeping the union out.

Supervisor training is crucial to avoiding charges of Unfair Labor Practices. Knowing what can and cannot be said tricky business, as the AutoNation case proved. You can tell the truth and still practice labor law violations. Using eLearning tools to explain the TIPS and FOE rules and how to put them into practice makes sense. It can help your supervisors avoid blurting out statements out of fear that violate the law. A consultant can provide invaluable advice on creating videos that deliver union avoidance training for leaders and a consistent message to employees.

Learn To Handle The Fear of Unionization

Fear is a basic response that drives a person to take self-protecting action in certain circumstances. Psychologists have an interesting perspective on fear, and it’s applicable to situations involving employer responses to union organizing. They say fear is not totally automatic, but rather it is part:

When the fear response is present, it can amplify (creating unreasonable fear of unions) and lead to undesirable responses (supervisor threatens an employee). The psychologists go on to say that real threats drive people into action. Overhearing a couple of employees talking about unionization creates real fear and imaginings about what could happen during an organizing drive. The supervisor is driven to action, like blurting out an inappropriate response.

Educate Your Supervisors on Organizing Campaigns

The best way to deal with the fear of unions is to offer videos, websites, and eLearning resources. They’ll explain what to say and not say, educate organizational leaders on how to manage a union organizing attempt, and educate the workforce on the company’s perspective of unions. A labor consultant or attorney will be able to help you develop resources and train your frontline supervisors on how to communicate with employees about unions. You may not like, or even fear, unions, but that won’t stop the union from attempting to unionize your workforce. Rare NLRA violations are likely to be minimized if your leaders develop a fair and ethical workplace and a positive organizational culture.

Franklin D. Roosevelt’s famous quote about fear goes like this: “The only thing we have to fear is fear itself – nameless, unreasoning, unjustified terror which paralyzes needed efforts to convert retreat into advance.” He was saying that fear-driven actions will make things worse. Don’t let supervisor or manager fear, due to lack of knowledge, create a worse situation when the union comes knocking. There are right ways and wrong ways to respond, and the response may be a deciding factor in your ability to stay union free. Do your supervisors know how to recall the right way at the right time?