How To Avoid Employee Protests And Walkouts 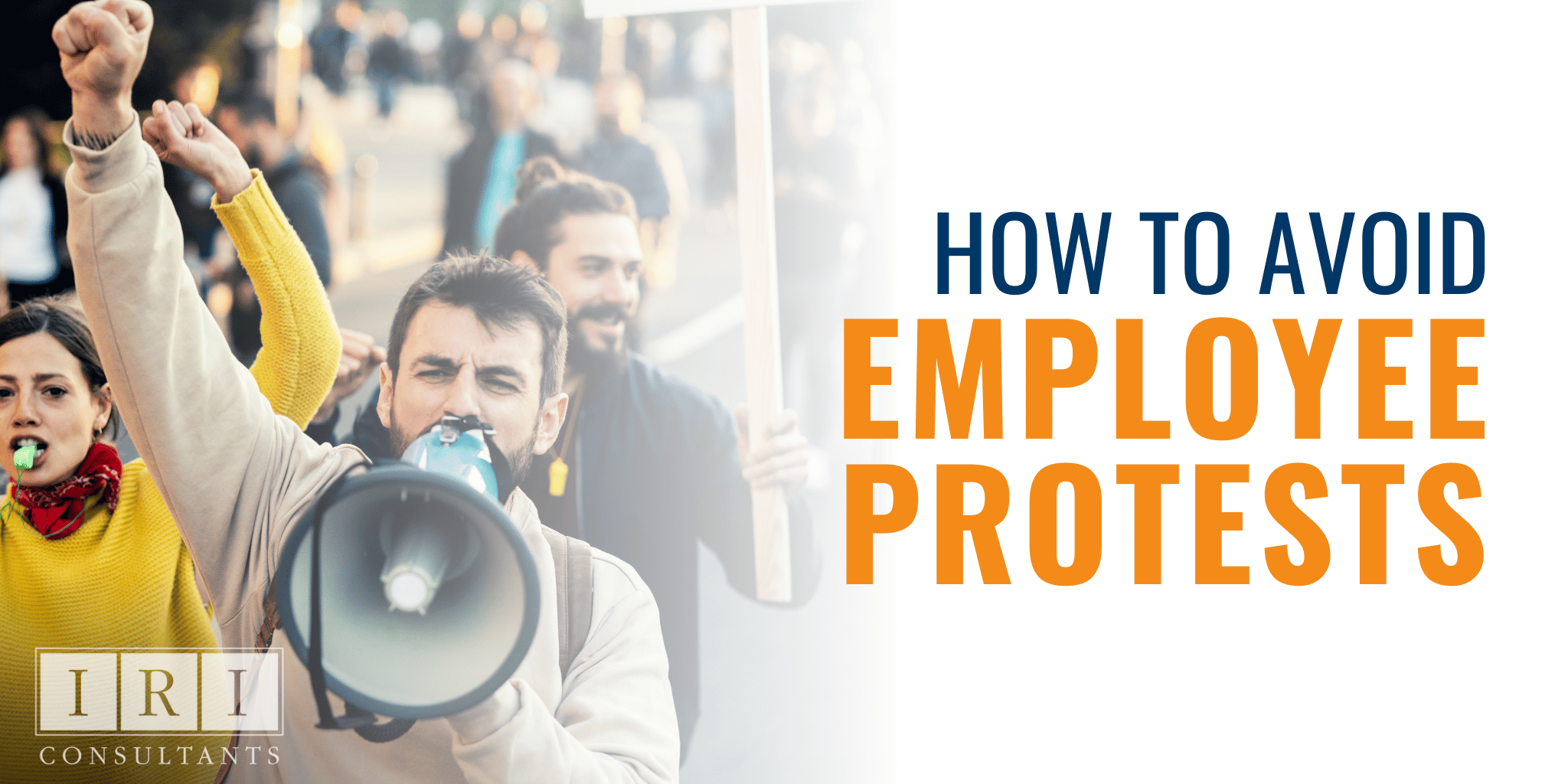 How To Avoid Employee Protests

Employees today are more willing to go public with their workplace complaints. It doesn't matter if the workforce is union or non-union. Employees will walk off the job, publicly share their complaints and post criticisms of their employers on social media. Did the company even try to figure out how to avoid employee protests? Did the company's leaders at least try to sit down and talk about the issues? Why did employees believe it was necessary to walkout and make a very public protest about their employer?

Organizing Without A Union

On May 1, 2019, approximately 20,000 Google employees held an international sit-in. They were protesting alleged management retaliation against employees who had previously joined a walkout in November 2018. The original walkout, according to the organizers, was to protest "sexual harassment, misconduct, lack of transparency, and a workplace that doesn't work for everyone." The retaliation claims included employees being demoted, jobs restructured, being forced to take sick leave when not sick, and having staff reports taken away. May 1 was chosen because it is May Day and International Workers' Day.

While Google employees are not unionized, any group activity like a protest requires organizers. Google employee Meredith Whittaker organized the "Google Walkout For Real Change." She believes she is a victim of retaliation for organizing the walkout on November 1, 2018. Whittaker was clearly the top mover and shaker. However, there were other employees who played critical roles in both walkouts, like Claire Stapleton.

Whittaker left Google on July 15, 2019, to join the AI Now Institute at NYU. She is assuming a state-of-the-art job by working at a research unit dedicated to studying the social implications of Artificial Intelligence. Why is this relevant to this discussion? She is likely to continue her organizing efforts in the tech industry. This kind of job will be a steady source of information for her. As a non-union tech worker, Whittaker represents the younger generation and their style of organizing in an industry experiencing rapid change.

No Immunity To Organizing

There is a lot to learn from the Google walkouts. One is that no company is immune to organizing in some form. The danger is that employees who do organize on their own and see results are more likely to formally organize via a union. When they do this, they gain an even more powerful voice. Some Google employees didn't join the walkout/sit-in because it would mean a high risk of job loss. Many of them were TVCs (temps, vendors, and contractors), called the "shadow workforce," and a group the unions would love to organize. The protesting workers shared their protest issues and experiences via Twitter, more proof of the power of social media as an organizing tool.

The employee stories of retaliation indicate a lack of employer transparency and inadequate communication of the core issues. According to Whittaker and Stapleton, plus 10 other organizing leaders, "Google has a culture of retaliation, which too often works to silence women, people of color, and gender minorities. Retaliation isn't always obvious. It's often confusing and drawn out, consisting of icy conversations, gaslighting, project cancellations, transition rejections, or demotions." Before the walkout, employees held a town hall meeting, similar to a union organizing meeting. Of course, Google management responded by saying retaliation is clearly prohibited in policies, and all employee claims are investigated.

Some of the Google employees were interviewed about their participation in the protests. Employee Ashley said, "I've been seeing more and more of a rift between top-level execs and the rest of the company." One of the things she says points to poor employer communication and lack of transparency of core issues. Ashley mentions that Google management used to hold weekly meetings where executives would field all types of hard questions and answer with transparency and honesty. Employees appreciated these meetings, and stopping them made top management less transparent and appear like they had something to hide.

One of the most effective ways to keep employees engaged is by regularly communicating with employees to keep in touch with their concerns. This will also reinforce a commitment to transparency. If an employer doesn't sit down with employees inside the business and address their concerns (which doesn't mean always giving in to their demands), the employer may find the employees sitting outside the business for all the world to hear their complaints as they use words like "solidarity," "demands" and "chilling practices." You can bet a union has been involved behind the scenes of the Google protests because this is the language of unions and the language the protesting Google employees are using.

Google, Walmart, and other businesses have experienced walkouts. A small walkout occurred on Amazon's Prime Day at a Minnesota warehouse. Employees wanted fairer scheduling, more reasonable production quotas, more temporary workers converted to employee status, and safer working conditions. Not too long ago, the public demands of employees led to Amazon agreeing to pay a $15 per hour minimum. But the goodwill of higher pay had already worn off.

The good thing about a short walkout is that employers are given an opportunity to address the major concerns of employees without going through union representatives or a drawn-out labor situation. Compare the six-hour Amazon warehouse employee walkout to the months-long Chicago hotel workers strike, or the four months of contentious contract negotiations between King Soopers and City Market grocery stores, and the UGCW Local 7 union that included the threat of a strike.

Avoid Employee Protests By Being On the Same Page

Companies publicly quoting company policies in response to employee protests often add fuel to the fire. The reason employees walk out includes believing a policy is harmful. Or if the policy is fair, they believe the employer is violating it. There are usually multiple reasons employees protest. However, employers who avoid talking directly to employees only make it more likely a union will get a foothold. Some face-to-face communication is important for reinforcing management's personal commitment to work with employees. However, time constraints limit these types of sessions and meetings.

Fortunately, technology tools can ease the burden and help to avoid employee protests. Tools include videos, websites, and eLearning for employee training and communication. However, it's how the tools are used that determines their success. Posting a policy on a website makes it readily available 24/7, but has the same issue as publicly quoting it. The policy must be clarified through additional explanation as to why the policy exists and how it is applied. This is how transparency and employee engagement are improved.

The information should be presented in a confident manner which is why so many employers use professionally developed tools. Consistency is also critical. All of your managers and supervisors at every level should be able to respond to employee questions with consistent answers. Managers are creating opportunities for dissatisfied employees to attack policies and procedures if they are saying something different than what the CEO is saying or contradicting what is communicated to employees through the various communication tools.

Managing the continuous changes in labor laws is a challenge that employers are facing today. Another one is dealing with the willingness of employees to loudly and publicly complain about their employers, with many complaints going viral around the world. Protests are seldom a local issue any longer. Google and Amazon employees in Europe asked fellow employees in the U.S. how they can show solidarity.

Employers are more likely to find themselves in a defensive mode for damage control when they lack the confidence to respond to employee issues directly and transparently. Leadership training is crucial. The training should be realistic and actionable. It should also produce trainees who can confidently and effectively talk to staff members and know how to act in various situations. One of the triggers for the original Google walkout was a manager who retaliated against an employee for reporting him for sexual harassment. HR agreed he was guilty. However, the only consequence for the manager was being coached on the company's policy. This made the employee angry and resentful.

It is wise to consult a labor professional or labor attorney as part of the leadership training program long before you are challenged by employees. They can help teach you how to avoid employee protests. A labor expert can:

Today it could be said that you need to union proof or organize proof your business. Not responding to employees when they complain is a mistake that can lead to serious consequences, like unionization or walkouts. Ask the employees who are clear leaders to sit down and talk about their concerns. Answer their questions so that you can figure out how to prevent employee protests. Reinforce a culture of support and regularly update the online information to address the specific concerns of all employees. Silence is definitely not golden when it comes to employee engagement.