The Five Steps Union Use To Organize Your Employees 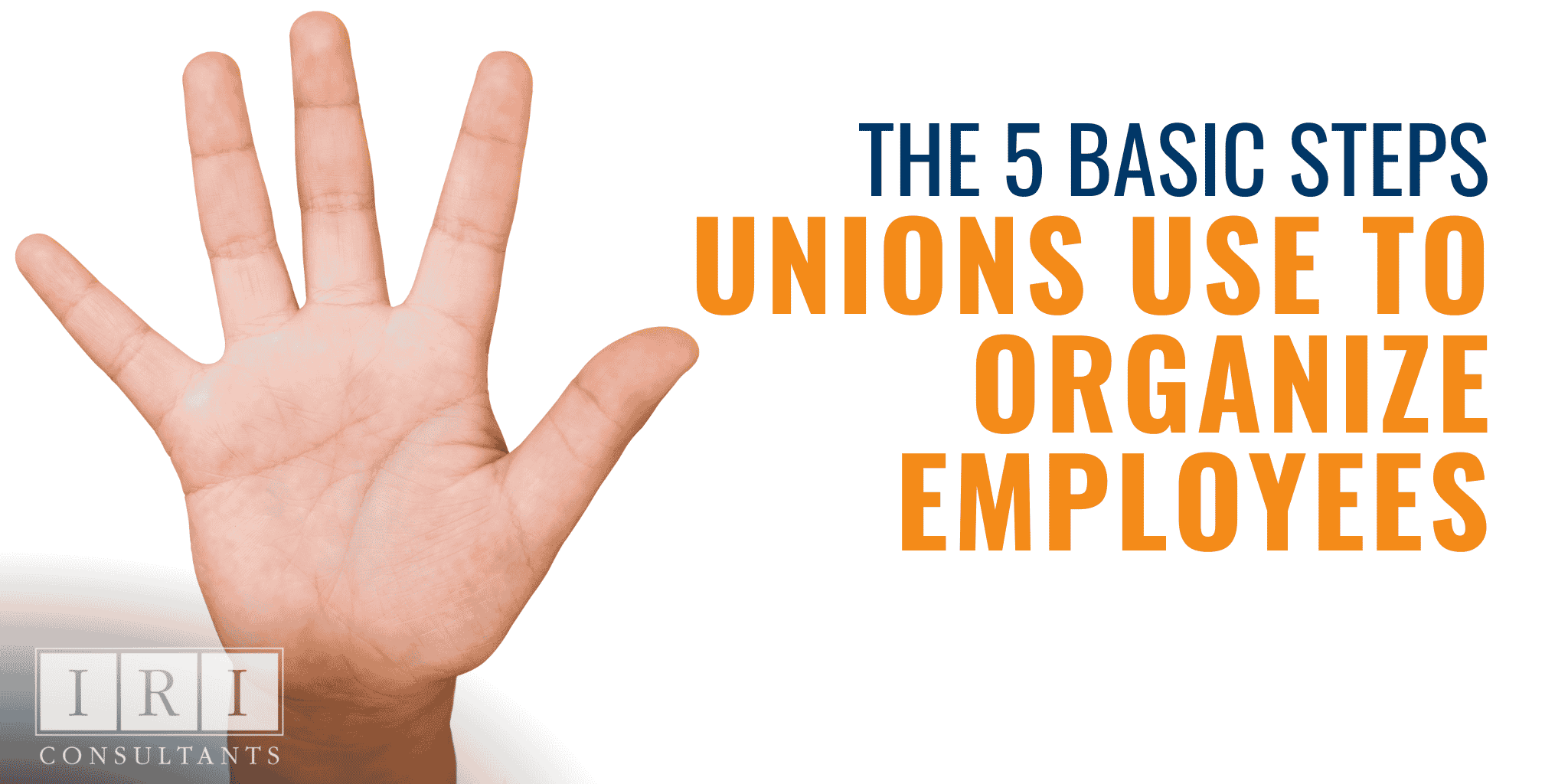 The Five Steps Unions Use to Organize Your Employees

Table Of Contents
1
Understanding The Steps Unions Use To Organize Can Keep Unions Out
2
These Are The Steps Used To Organize
3
Step 1: The union will spread its message inside the workplace
4
Step 2: The union informs the NLRB of interest in unionizing
5
Step 3: The union runs an organizing drive
6
Step 4: Union representation election is held
7
Step 5: Collective bargaining between the employer and the union

Understanding The Steps Unions Use To Organize Can Keep Unions Out

Unions are always rigorously searching for new opportunities across industries. Once, they primarily focused on blue-collar industries, such as construction and manufacturing but they have rapidly adapted to the transformed workplace, as jobs are redesigned to accommodate technology, and work schedules have become more flexible. Despite this adaptation, there are still some basic steps unions use to organize employees, and we're going to share those here today.

No longer confined to who they used to be, unions today target all types of employees, across all industries including salespeople, university instructors, and tech workers.

Reinforcing this effort is a National Labor Relations Board (NLRB) that spent the past decade writing new regulations and issuing decisions in a variety of employee complaint cases that have a bottom-line effect of making it easier for unions to find footing in organizations. The regulations and decisions also made it more challenging for employers to union-proof their workplaces.

Online, unions offer a wealth of information explaining the steps unions use to organize. They're experts at getting the proverbial toe in the door by enlisting employees to act as union champions. To keep unions out, employers must be fully informed, and ensure they have developed a positive workplace culture in which their employees are engaged through open and honest communication and feel free to bring concerns to management.

These Are The Steps Used To Organize

The first step is getting a bird's eye view of the union organizing process. The following are five basic steps from the union representative's first contact with employees to the signing of the union contract, and we will discuss each one in-depth below:

Here is a more in-depth look at each step of the process:

Step 1: The union will spread its message inside the workplace

Unhappy employees can make the first contact with a union, or a union may initially contact employees. Either way, the union's first step is to create an internal Volunteer Organizing Committee, or "VOC." Once the union has an internal messenger, early leaders from all major departments and shifts that might fall within the bargaining unit are identified. They become champions of the union's cause, who evaluate workplace interest in unionizing, recruit co-workers to join the organizing campaign, solicit co-workers to sign union authorization cards (online or in-person), and direct contacts with a wider group of employees to identify potential workplace issues. It's crucial you fully understand worker rights before a union ever makes contact, so you know how to respond, should an organizing effort take root.

Step 2: The union informs the NLRB of interest in unionizing

Next, the union presents employee-signed union authorization cards to the NLRB, showing interest in unionization and petitioning for an election. The NLRB holds a hearing and sets an election date.

Another scenario at this point is that the union may wait until they get 50% +1 employee to sign authorization cards, and petition for recognition without an election. This method, called "card check" has become more popular as unions realize how difficult and costly it can be to hold the interest of employees over a prolonged organizing drive.

Read: A Manager's Guide to a Union's Demand For Recognition

So if the employer chooses not to voluntarily recognize the union, a period of time will be designated prior to the NLRB election, during which a campaign is held. During the campaign, the union will talk to employees about the benefits of unionization. The employer is legally obligated to provide the union with a list of all employees in the designated potential bargaining unit, including their contact information. No employee is allowed to "opt-out" of this list.

Also during this time, the employer should begin educating employees. This can include information on employees' legal right to remain union-free, and specific information on the union trying to organize them. With more information in hand, many employees lose interest in union representation. Remember that you, as an employer, also have rights and responsibilities during this time and it's critical that employers know what they can or cannot do or say.

Next, based on the NLRB's timeline, a secret ballot election is held. Employees may vote in person, or via mail-in ballot (usually for industries where employees are rarely on-site, such as trucking). The election may take place in a single day or maybe over a multi-day period (for larger bargaining units or those who do shift work and aren't on-site daily).

The ballots are then counted by an NLRB representative, with both a union representative and a company representative present. If there are no challenged ballots (for example, an employee who may be classified as a supervisor who mistakenly voted, or one whose status as part of the bargaining unit is in question), the votes are tallied and the union is either certified as the employees' bargaining representative or the employees remain union-free.

Step 5: Collective bargaining between the employer and the union

If the union is certified to represent your employees, you are legally required to negotiate in good faith. Negotiations cover all aspects of employees' work lives - things such as wage rates, work schedules, resolving disputes, workplace safety, benefits, and dues. Bargaining can take any length of time, and as long as the employer bargains in good faith, there is no legal obligation to agree to any contract.

Of course, it's much easier to develop a UnionProof culture through positive employer-employee relationships and effective leadership. This requires highly effective and consistent communication and employee training to inspire true engagement. Be sure to share the positive aspects of working for your company - like benefits or flex-time working schedules - and to fully explain the consequences of joining a union, such as loss of control, an obligation to pay dues, and the very real possibility of going out on strike. Employers can easily stay connected to employees, no matter where they work, through online and mobile training videos, interactive eLearning opportunities, and custom websites. It's an investment guaranteed to bring long-term returns.