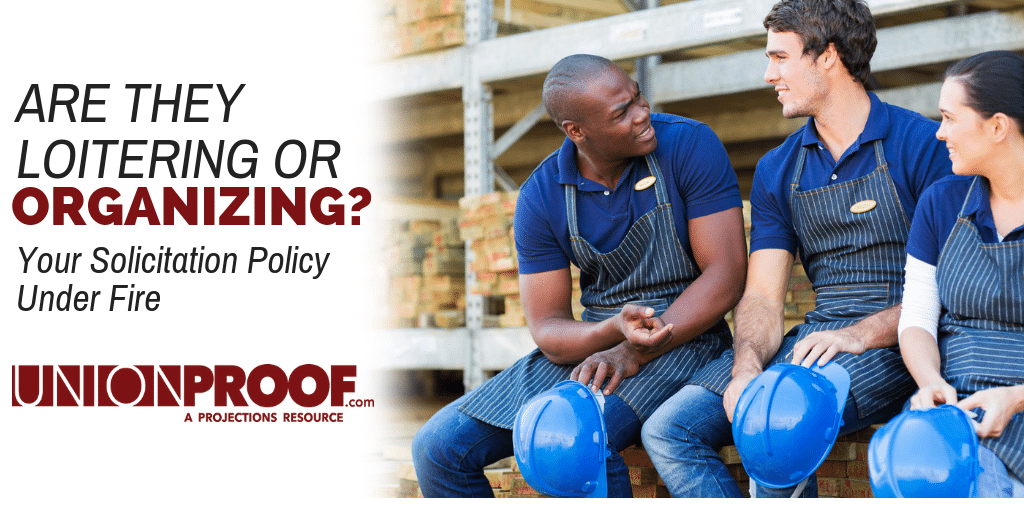 Tagged with: Labor Law, UP: Responding

Being involved in any National Labor Relations Board (NLRB) case is expensive and mostly involve employers accused of violating employer rights that are protected by the National Labor Relations Act (NLRA). Unfortunately, a settled charge doesn’t always mean “case closed.” The NLRB case of EYM King of Michigan, LLC d/b/a Burger King (07-CA-118835; 366 NLRB No. 156) is a good example of an employer who had to defend itself and its solicitation policies against employee charges of unfair labor practices to the NLRB and an Administrative Law Judge, lost and was told the employer’s entire employee handbook and solicitation policy would be reviewed, even though the charge was settled.

RELATED: How to Build Your Union Proof Culture From Day One

The Facts: Chapter One

After purchasing the Burger King in 2013, a business owner distributed its Employment Policies and Procedures Handbook to all employees. In the handbook there is a “Loitering and Solicitation Policy.” Violation of the policy subjected the employee to discipline. About the same time, two employees, Wilson and Frazier, participated in the protest strike organized by the Michigan Workers Organizing Committee, an alt-labor group. The strike was to advocate for a $15 per hour minimum wage for fast food employees.

General Manager Pack noticed Wilson was carrying a clipboard with her that held a wage questionnaire. She was presenting the questionnaire to various coworkers while they were off-duty. On September 19, Wilson and a coworker, both off-duty, sat in Wilson’s parked car in the employer’s parking lot. Wilson asked the coworker to complete the questionnaire. Pack saw the two employees talking and sharing the questionnaire and told Wilson that she was violating the company’s “Loitering and Solicititation Policy.” The General Manager asked the employee to leave, reported the policy violation to the district manager which led to an employee disciplinary write-up.

The next day, Pack was sent home early after the Assistant Store Manager reported Wilson was not following procedures for placing pickles on sandwiches. The employer held a mandatory employee meeting to review various policies in the handbook. In October, the second employee named Frazier was found talking to two coworkers about soliciting the participation of employees in other fast food restaurants in various protest strikes. This employer owns 21 Burger King restaurants, so there was a fear the employees would try to unionize all 21 locations. The employer told Frazier that she was going to “be picking up your last paycheck,” if she continued to talk about striking.

The policy was found to be unlawful because it was too broad, in that it prohibited employees from union activity on all of the employer’s property during non-working hours. Since the parking lot isn’t a selling area and the employees weren’t interfering with customers, and were not working, they had a right to engage in union activities by organizing. It was also noted the employer stopped employees from talking about unions but allowed them to talk about other topics not related to unions. This is similar to the situation in which an employer doesn’t allow employees to post pro-union information on workplace bulletin boards but does allow them to post other items.

The General Manager knew the two employees Wilson and Frazier had worked part-time for the union when she hired them and that they had participated in a strike against the previous Burger King owner. The union is called D15, and the May 2013 strike was an attempt to get the minimum wage increased. The employees participated in two more strikes on July 31 and August 29. After the July strike, Assistant Manager Jones inquired as to how the strike went, and Assistant Manager Howard asked them when the next strike is scheduled.

Knowing the law is crucial. The Burger King employer thought he was entitled to stop employees from loitering or soliciting and discussing unions and wages. As the Judge wrote, “This assertion is simply incorrect.” You can forbid employees to discuss unions during work hours, but the prohibition must also apply to all other topics not connected with work.

You cannot declare all of your business property as working areas in an effort to prohibit employees from conducting union activity. The solicitation policy can limit access only to the workplace interior and other working areas. It cannot ban off-duty employees from being on the employer’s premises in non-working areas. The employer’s confidentiality and professional conduct rules were also reviewed and found to violate the NLRA. The rules use language that is too broad, like “disrespectful conduct” and “abusive and unprofessional.”

It’s not disrespectful to discuss unions, and misconduct includes making false, fraudulent and malicious statements about the company to managers, customers, visitors, suppliers and team members. The Judge found that the broad disrespectful conduct rule exposed employees to discipline for making false statements, even when they are not malicious or intentionally false. The Judge also found that the rules prohibiting abusive or unprofessional behavior were also too broad and could end up prohibiting protected activity.

It is astonishing that protected activities include the right of employees to misrepresent company documents or make false statements, unless the misrepresentations and statements are malicious and material. You also cannot forbid the use of foul and abusive language, nor unprofessional conduct, when the rule is too vague and could create a chilling effect.

RELATED: Can You Document Union Activity With Smartphones?

Unfortunately, many employer policy handbooks remain land mines of information that employees can use to charge their employers with unfair labor practices. Following are a few reminders:

Your managers and supervisors must be trained on employee protected rights and understand what they can say and do to avoid exposing the company to charges of unfair labor practices. It’s a major component of any strategy to UnionProof the workplace.

The EYM case took five years to settle, serving as a reminder that a charge filed against the employer is time consuming and expensive, and damaging to employer-employee relationships. It’s also a reminder of the importance of employee engagement because informed and engaged employees know they can discuss issues with their supervisors and expect an honest effort to find a resolution. The EMY case is chock full of information, demonstrating once again the complexity of labor law. This case is technically closed, but the NLRB said it would review the employer solicitation policy and all of the employer handbook’s policies. So it’s not really closed, even after five years.

Are your employees loitering or organizing union members? Be careful how you answer!