What Can Employees Do to Oppose Union Organizing? 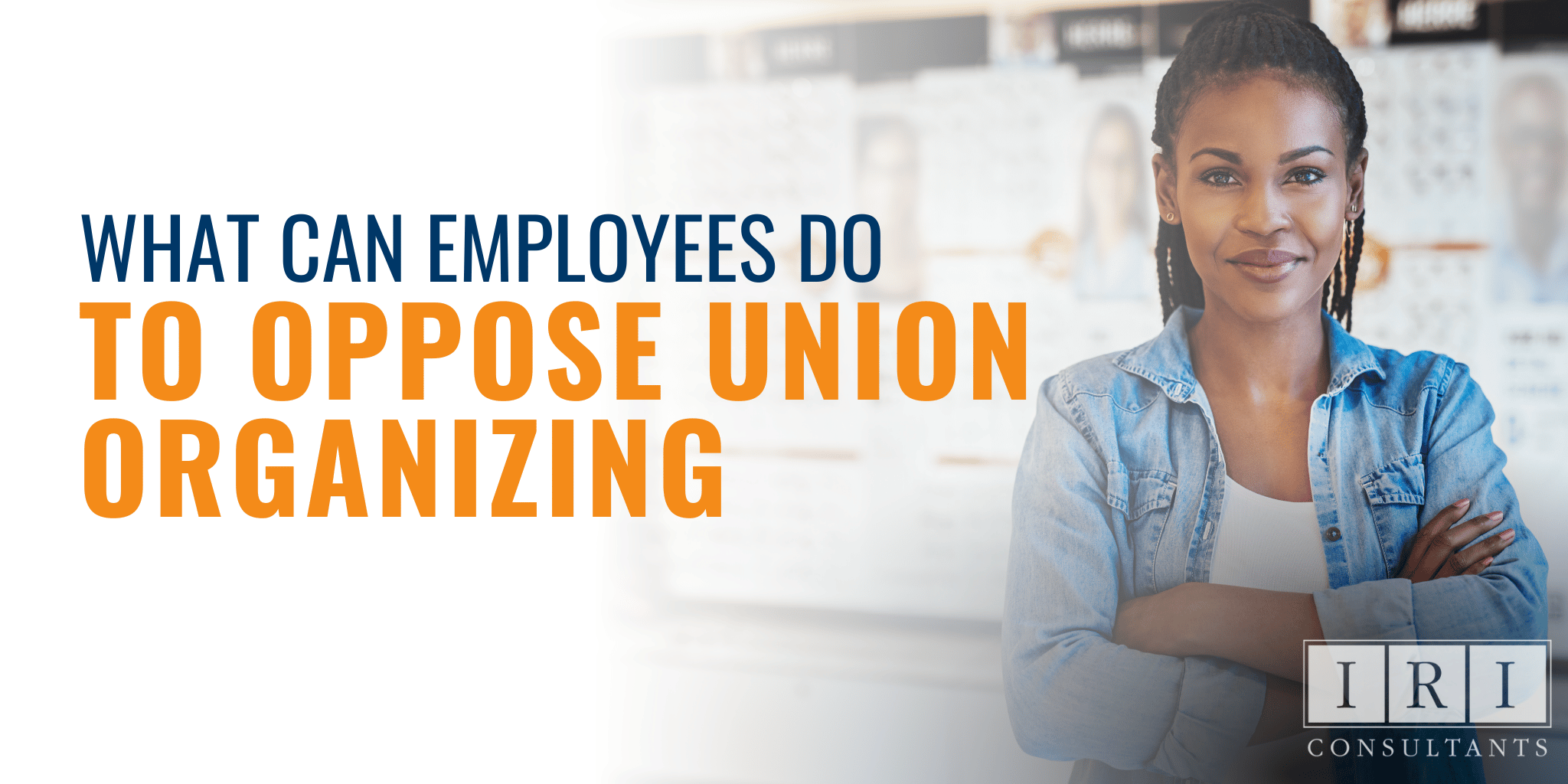 What Can Employees Do to Oppose A Union Organizing Campaign?

As a community, we often discuss how employers can oppose a union organizing campaign - and what cannot be done. We have even written here about what employees can do and say when they don't support unionizing. Today, staying union-free gets more difficult by the day due to a union-friendly U.S. administration and turmoil created by events like a pandemic, remote work, technology leading to job changes and required worker skills, and a growing gig workforce.

Now, it's a great time to be sure you understand employees themselves can do to push back against union organiizng. It's a fact that one thing that's not reported in the media (by labor-friendly politicians and labor unions themselves) is how employees who want to stay union-free can fight back against the social pressures to organize.

While Section 7 of the National Labor Relations Act supports workers' right to organize, it also supports their right oppose unionization - and in fact, protects their right to be open about that opposition. Employees can push back on unions. That's a fact. They can wear "NO union" pins and t-shirts, refuse to sign a union card, and report illegal union activities to management.

Educating employees can be as simple - and as challenging - as showing a video that explains their rights, like "Push Back." This resource can help you understand what your employees can do to help stay union-free. Here's a quick review of the legal steps you can take to support their efforts.

Here are a few things your employees can do when they want to stay union-free.

In fact, your employees who oppose joining a union can take action like posting pictures of the union behaving badly on Instagram or post podcasts as a post link or video on Facebook that describes how much they enjoy their work, how your organization empowers employees, and the company's open-door policy, to name a few tech-based options.

During a union organizing campaign, employees supporting unions focus on negatives. They forget all the good aspects of the workplace, don't remember the way the supervisor adjusted the work schedule to accommodate family needs, and fail to remember how management was transparent about operational changes.

All the union wants is for employees to see themselves as "victims" of management. But employees can resist and focus on reminding coworkers of the positives.

Employees can remind coworkers that being union-free means they:

Anti-union employees can also remind coworkers that times have changed. Even today, unions focus on changes they brought to the workplace in the early 1900s. We've advanced as a society and these changes are now part of our laws.

Amazon has built a facility in Bessemer, Alabama, and has a union vote coming up at the end of March 2021. A union organizer made an interesting comment concerning the new facility built on land once owned by U.S. Steel, a solid union operation. "I truly believe that if we win," says Joshua Brewer, an RWDSU (Retail, Wholesale and Department Store Union) organizer in Alabama who's working on the Bessemer campaign, "it will be because grandparents and uncles and parents talked to these young folks who work out here and said, this helped me, and it's a good thing."

Times have changed since grandparents and uncles and parents joined unions. Today, employees have legal protections, all monitored by various government entities, making unions unnecessary. There are laws and regulations requiring safe working conditions, healthcare benefits, leave time, paid holidays and sick leave, and retirement security. There are anti-discrimination laws, too, and several agencies employees can access when they believe their employer is treating them unfairly. Even better for employees is the fact they don't have to pay fees out of their earnings to get representation!

It's a major reason unions had to come up with new non-traditional issues to address.

Keeping it Factual Rather than Emotional

Your employees who want to stay union-free can talk about these facts, and you can provide the information they need. Anything that is a fact is legal. One option is to add a web page to your employee-facing union-focused website (aka a dark website taken live), with the facts your employees can use to talk to coworkers about why they want to remain union-free.

It's not easy to oppose unionizing, so respect the employees that do. It's not easy to tell emotional coworkers why they want to remain union-free. The pressure placed on people is intense. During the Amazon campaign mentioned earlier, organizers set up a tent close to the Amazon warehouse that has snacks. "We haven't had to buy doughnuts, coffee, or food for four months," the RWDSU organizer says. "Local unions are always coming by the tent, feeding our organizers. There's very much a brotherhood and a sisterhood here of union people."

So your employees may be up against a tide of support for the union from co-workers; something that's far more difficult to oppose than some outside union organizers.

Every day for months, the RWDSU members from local businesses stood outside the Amazon facility from 3:30 AM to 8 PM to talk to Amazon employees. Social pressure is a major challenge to overcome. A group of workers from multiple businesses making your employees feel special goes right to the emotions rather than reason.

The Jobs with Justice Education Fund published a 30-page guide titled, Making the Case for Union Membership: The Strategic Value of New Hire Orientations. It was written for union leaders and their staff. Though directed at recruiting new hires in a place already unionized, it supplies valuable information you can use to help employees who want to stay union-free understand union behaviors, so they aren't blind-sided and can pass on the information to coworkers.

As the Freedom Foundation describes an analysis of the documents,

The social pressure to accept a union as the solution to every employee issue is more intense today than it has been for decades. The government and unions are seizing the moment of social unrest - and corporate responsibility - to support unions, so the PRO Act has been reintroduced in the House of Representatives.

Some businesses are discovering that social pressure is also coming from former employees and non-employees, taking the challenge of staying union-free to a newer, more challenging level.

For example, employees voted down a union at No Evil Food on February 13, 2020, but unionizing was not the current workforce's idea. A former employee told Waging Nonviolence, "The union was brought up by past employees who originally were wanting higher wages, healthcare, and a voice within the company." Once the current employees decided they needed a union, the laundry list of complaints became much longer – micromanagement, failure of COVD-19 prevention measures, turnover issues, shifting schedules, and other major issues.

Your employees who don't want to join a union are really fighting a groundswell of support for unions in general. You can help them in significant and legal ways. They include:

It's important to reiterate that employers cannot tell employees how to vote or provide resources directly that do more than explain the company's position on unions or suggest employees vote. Education, however, is a powerful tool. The information you provide must be allowed under the National Labor Relations Act (NLRA) and legal within National Labor Relations Board (NLRB) decisions, which means the information is from your perspective as an employer. You cannot speak for your employees.

Anything said, written, or posted about the union must be factual too. You will face an Unfair Labor Practice charge if you don't stick to the facts. A pushback employee may tell coworkers, " don't give your money to the union - it's a corrupt organization that's only in it for themselves." What fact backs up the claims of corruption? What facts can you provide to legally fuel the union opposition from within?

In December 2020, the U.S. Department of Justice announced a settlement in a corruption investigation of the United Auto Workers (UAW). Twelve UAW officers were found guilty of embezzling union funds and defrauding union members. Wouldn't an employee who doesn't support unionizing want to know that fact if the UAW is trying to unionize the workplace? You can legally present this kind of information that your employees can then share with one another.

There will always be employees who don't want to join a union. Supporting that internal effort with additional fact-based research, as videos, and websites can help those employees will push back, even bravely go public with their opinion.

Dawn Hoag is an Amazon worker at the Bessemer facility. Ms, Hoag told the A.P. News she is not voting for unionization for several reasons. One reason is that Amazon makes it clear to job applicants the physical work requirements are demanding. In addition, Hoag said she can speak up for herself and doesn't need to pay a union to do it for her. "That's just what I believe," Hoag says. "I don't see a need for it at all."

Take Advantage of the Resources

Be authentic in your desire to maintain your direct connection. Give your employees the facts, the truth, transparency, and a voice to stay union-free. Projections, Inc. has all the tools and resources you need to keep the union out. Tools include leadership training, videos with targeted information, podcasts, customized web development, employee communication resources, union campaign tools, and more. You're not alone in your desire to stay union-free, and with your support, neither are your employees who want to push back against unions.