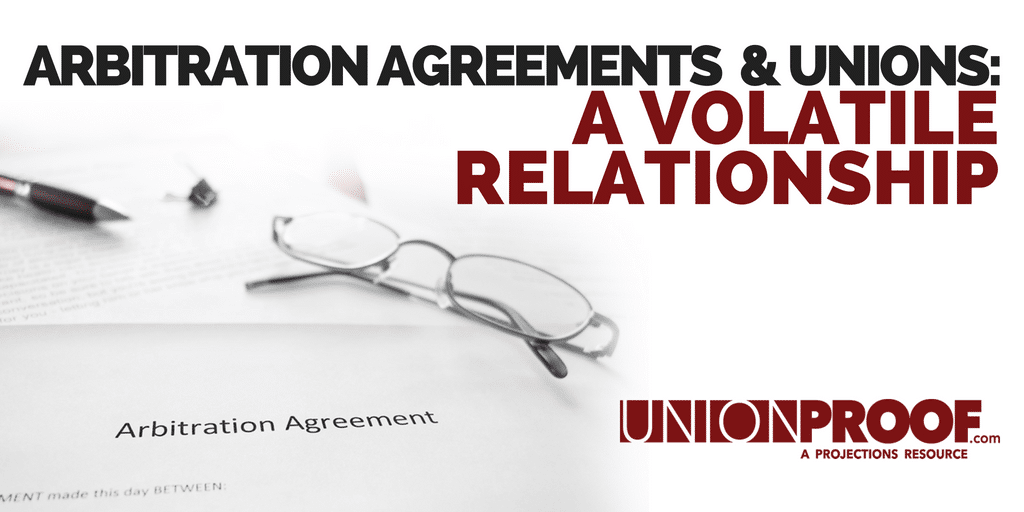 The U.S. Supreme Court recently issued a decision concerning the right of employers to include mandatory mutual arbitration agreements in contracts. An arbitration clause states that an employee agrees to not pursue legal action, individually or collectively, against an employer in court when protesting job-related issues like wrongful termination or wages. Instead, the employee agrees to only utilize a private arbitration process on an individual basis and waives the right to join a class-action lawsuit against the employer. Unions believe the arbitration clause violates worker rights, and the National Labor Relations Board (NLRB) agreed in past rulings. The Supreme Court Decision upended the NLRB rulings, making it easier for you to avoid expensive drawn-out legal expenses but igniting union anger.

The NLRB ruled in 2012 that mandatory mutual arbitration agreements violate the “concerted activity” protection of the National Labor Relations Act (NLRA). Since then, the NLRB has reaffirmed that it believes employment arbitration agreements – prohibiting an employee from participating in joint, class, or collective actions concerning employment-related claims – are a violation of the NLRA. The NLRB also used 29 U.S. Code 157 language to support its anti-arbitration stance. The code titled Right of Employees As To Organization, Collective Bargaining, etc. says, “Employees shall have the right to self-organization, to form, join or assist labor organizations, to bargain collectively through representatives of their own choosing, and to engage in concerted activities for the purpose of collective bargaining.”

D.R. Horton and Murphy Oil were the first cases, but a pro-union NLRB has issued numerous other decisions against mandatory mutual arbitration agreements. As decisions were appealed, circuit courts decided in support of employer mandatory arbitration agreements. In defiance, the NLRB chose to follow a policy of non-acquiescence. In other words, the NLRB ignored the court decisions.

Things changed with the recent Supreme Court pro-arbitration decision in Epic Systems Corp. v. Lewis that consolidated three appeal cases. The Supreme Court decided, “The Arbitration Act requires courts to enforce agreements to arbitrate…” It further noted that the only time courts can refuse to enforce arbitration agreements is when there is “fraud, duress, or unconscionability” involved. The Trump administration’s NLRB actively embraced the decision and is currently pursuing court reviews of existing filed lawsuits involving mandatory mutual arbitration agreements to get them tossed out.

Understanding Mutual Arbitration Agreements – Who Do They Protect?

There are two important points to keep in mind concerning mutual arbitration agreements. One is that the Supreme Court decision doesn’t impact employees who already belong to a union. Another is that employers and unions will continue to use agreed-upon labor arbitration processes to settle grievances. However, you should recognize that this decision could encourage your employees to pursue unionization in order to negotiate employment contracts that do away with mandatory employment arbitration agreements and allow employees to file individual or collective lawsuits with union assistance. The union will negotiate a contract that only includes a labor arbitration process approved by the union.

You should also be aware that unions are always actively working behind the scenes to train traditional employees and contracted or other nontraditional workers on asserting worker rights to encourage people to not accept or fight against mandatory mutual arbitration agreements. This could easily become a major employer issue in a competitive labor market in which people have many job options.

If you require new or current employees to sign mandatory mutual arbitration agreements, it’s important to explain the positive reasons for the requirement. Engaging employees and making them feel like they have a voice in the company depends on transparency and trust.

There are many valid reasons for using mutual arbitration agreements that benefit employees as well as employers, like keeping legal costs down, speeding up grievance decisions, and avoiding employee-employer hostilities that often accompany court cases. With the Supreme Court decision, following the best practices in employee engagement applies more than ever if you want to stay union-free.