What Impact Will COVID-19 Have On Union Organizing? 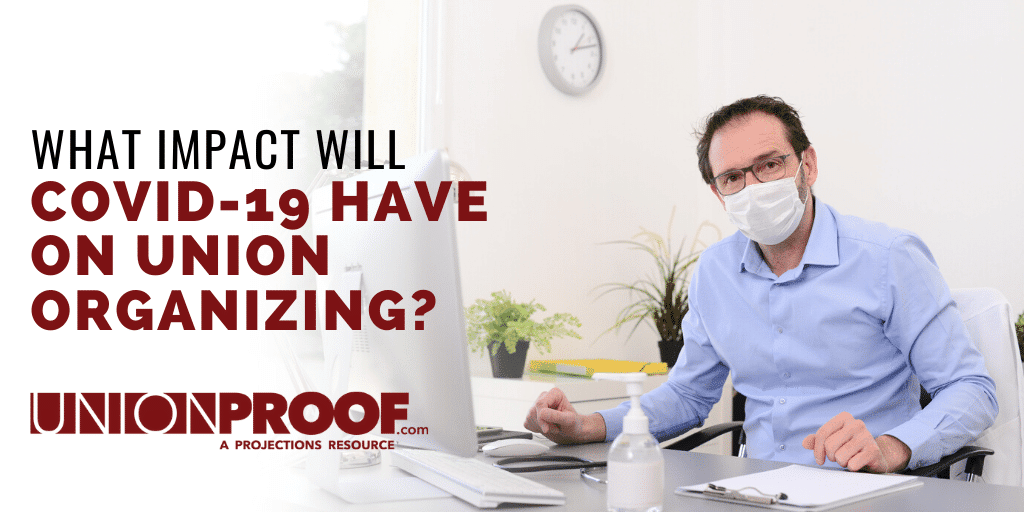 What Impact Will COVID-19 Have On Union Organizing?

At some point, employees will return to work in their offices, plants, facilities warehouses, restaurants, bars, and stores. How will they feel about work, their employer, their safety and health, and their working conditions? Will employee concerns and fears impact their perspectives about unions? These are two critical questions each employer should be asking now and not later. The COVID-19 virus pandemic created a scenario that seems almost ideal for unions to step in and leverage employee fears. Despite the virus’ unprecedented impact, we can already put the pieces of the current puzzle together to create a picture of the future for employers – a future filled with re-energized union organizing activity.

A Fearful Workforce is a Fair Game for Unions

Unions are already focusing on issues like health and safety, working conditions, hazard pay, benefits that include approved time off with pay, and psychological health. COVID-19 has brought each one of these issues into the public arena. This creates the perfect stage for unions to market their services to employees.

Unions have been targeting workers who feel that they were unfairly treated, even before guidelines were set or employers could take action. The Electrical Workers published “The Fight of our Lives: 5 Steps to Organizing For Protection At Work,” and “We Don’t Have A Union. What Should Our Employer Be Doing About Coronavirus?” The CWA offered “Covid-19 Information for Non-Union Workers” Union marketing consultants UnionTrack suggested “7 Tips for Engaging Members During Quarantine.”

Employee engagement has never been more important than it is now.

As the future unfolds, unions are busy taking advantage of opportunities to engage workers. The first three months of 2020 have seen a number of events that indicate unions fully expect to significantly increase their membership.

We believe businesses have 2-5 months to engage and educate the C-Suite, managers, and supervisors on the new laws and what to expect from unions now and post COVID-19. You also have 2-5 months to strengthen the message to employees and gig workers or independent contractors on the importance of staying union-free.

From January to March 2020, several major events took place. Reading them as a sequence of events creates a realistic picture of union goals and strategies and what employers can expect after the crisis is over.

Instacart employees voted to unionize in February 2020. It has a workforce consisting of 12,000 store shoppers who are employees and 128,000 gig workers who earn their pay by accepting delivery orders on phone apps. The employees are classified as such because the employer controls their work and work hours, which are designed to keep them under the work hour limit for providing benefits.

Fifteen (15) employees led the union organizing campaign, backed by the United Food & Commercial Workers (UFCW). Though the union tried to make it seem as if organizing was solely the employees’ idea, the truth is the union approached workers at their place of employment in a store where they packed orders for Instacart customers.

Another important point is that gig workers cannot unionize – yet. The unions are thrilled with their success at Instacart because it gives them leverage to gain the support of gig workers.

With enough gig worker support and the right political backing, it is easy to imagine a day when gig workers will have the legal ability to unionize, even if not employees under current law. In the meantime, unions are using Instacart’s experience as proof they care about the rights of all workers.

Amazon has worked hard to meet employee needs and stay union-free. In March 2020, at a large distribution center in Staten Island, employees received information via text there was a second confirmed case of COVID-19. Several hours later, several dozen workers walked off the job in protest, over claims they were not getting adequate protection.

The RWDSU had tried to convince hundreds of workers to walk out. Protesting workers made their demands which included sanitizing the warehouse, full pay for any time the warehouse is shut down for sanitizing and they are unable to work, and retroactive pay for the weeks of exposure to hazardous conditions.

During this event, Amazon terminated employee Chris Smalls. The union claimed he was unfairly fired (unfair labor practice) for speaking out about safety conditions. Amazon said he had received multiple warnings about not following social distancing guidelines, putting others at risk.

The company said he also had close contact with an associate who had a confirmed case of COVID-19 and was asked to remain home. Amazon said it would pay him for 14 days at home. Instead, Smalls was terminated after he came onto the Amazon job site.

Kickstarter employees voted in February 2020 to unionize, making it the first well-known technology company to organize. There were not many people involved, with the vote being 46 yes and 37 no votes. However, pro-union analysts see this as a first step into the technology industry.

According to Veen Dubal, Associate Professor of Employment Law at the University of California, Hastings College of Law, in the New York Times, the Kickstarter pro-union vote is important to the tech industry. It proves that tech workers can form bargaining units to influence working conditions, wages, and business decisions.

Fewer than 20 percent of Delta’s employees – the pilots – are represented by a union, making Delta the least unionized airline in the U.S., despite the Association of Flight Attendants trying to organize flight attendants for more than 10 years. The coronavirus has breathed new life into the effort, creating renewed flight attendant interest in unionizing over health and safety concerns.

There have been three failed attempts to unionize Delta employees in the past. The last attempt failed because the company made policy changes that rendered the union unnecessary. Now union organizers at the Association of Flight Attendants (AFA) see an opportunity to capitalize on fears about the virus and the desire of employees to gain labor protections. With 25,000 employees, unionizing Delta’s flight attendants would be a big victory for the AFA.

There is a legal push to support unions too. New laws passed by states and the federal government will have significant impacts on employers and workers in the future.

California AB5 took effect January 1, 2020, and other states are following suit. The law requires many freelancers to be reclassified by employers to employee status.

This law has not been popular with many freelancers or gig workers because it cost them work since employers can’t afford to add them to payroll and pay the costs of the additional benefits. The laws are being challenged, but in the meantime, they’re costing people employment or increasing employer payroll costs.

RELATED: What is the Impact of the Gig Economy on Unionization?

The Coronavirus stimulus bill (CARE Act) had additions that had nothing to do with stimulus funding. A couple of them intentionally protect unions and are designed to help unions rebuild their memberships in the future.

Businesses with 500 to 10,000 employees that accept federal loans have two major requirements:

There are other mandates impacting employers that take federal loans, and they too can easily lead to additional protection of union workers in practice.

According to labor experts, like the staff at UnionProof, and legal experts, unions now have a lot of impetus for renewing organizing efforts. Rutgers University Professor Wilma Liebman (on the NLRB during the Obama administration) expressed the belief that union membership could increase as a result of this requirement of accepting the loan.

Remaining neutral means the employers will not oppose unionization. As the National Right to Work Legal Defense Foundation writes, “While most neutrality agreements purport to merely require an employer to remain ‘neutral,’ in reality they impose a gag order on speech [that is] not favorable to the union.” Employers are only allowed to say positive things about the union, so some facts, experiences, and potential downsides of unionization may never come to light. Employees aren’t able to make a fully informed decision regarding unionization.

Perhaps one of the reasons the politicians added the “remain neutral” clause to the CARE Act is due to the fact there is a case in which the General Counsel for the National Labor Relations Board signaled in December 2019 that neutrality agreements can go too far.

Briefly, the GC said such an agreement could provide the Union with more than “ministerial aid” during the Union’s organizing campaign. In this case, the employer did things not required by law, like providing the Union with employee contact information to assist with organizing and agreeing to recognize the union without an election, if a majority of the employees in the bargaining unit indicated they wanted union representation.

The union violated the NLRA by accepting aid from the employer.

The General Council said both the employer and employee violated employee rights under the NLRA, and there must be an election. Some employees had already indicated they don’t support joining a union, so didn’t want the employer forcing them to without an election.

An appeal is filed with an Administrative Law Judge but is expected to be finally decided by the five-member Board in Washington.

A Few Reminders for the Future after COVID-19

There is so much activity related to unions happening right now. Coupled with the COVID-19 virus crisis and all its impacts, the unions see a much brighter future.

There are already many lessons you can take away from events taking place now in 2020.

The COVID-19 virus crisis also put the political campaigns for President on hold, but they won’t stay in the background for long. It is a fact that the Democratic Party strongly supports unions. This means employers must be prepared for an onslaught of campaign promises to workers and numerous negative comments about employers who take advantage of their employees.

What can you do now to prepare for the elevated union activity? Answer: Plenty!

Some of the steps involve preparing the workspace to address the safety of employees and customers. For example, Mark Cuban owns several restaurants and suggests that other restaurant owners reconfigure now the inside of the restaurant to make customers more comfortable in terms of space. He also emphatically said to get as much information as possible now about things like what to expect in terms of government regulations once businesses reopen.

This is very practical advice and can be applied in a much broader way to every business.

As an employer, you must prepare to the best of your ability for post-COVID-19. With the new knowledge that came with COVID-19, you should certainly revisit all Human Resources policies (like hazard pay, paid time off, and remote work arrangements). Review workplace aspects like workspace arrangements and meeting structures and venues.

However, the one most important steps you can take is keeping your employees engaged. If employee engagement was important to stay union-free before, it is now the number one, most critical step to keep renewed union activity out of your business.

If some of your employees are working remotely, you need to build a culture remotely by continuing to celebrate diversity, recognizing the extraordinary efforts of employees, and offering eLearning, web and video training and development opportunities. Your goal is to resume normal operations with an engaged workforce.

Stay Strong and Determined to Keep Your Direct Connection With Employees

Unions are stepping up their efforts to find new members and to promote themselves as defenders of the working men and women. They are taking advantage of the COVID-19 virus crisis to present themselves as the people who care the most about America’s workers.

The handwriting is on the wall: Once the crisis is over, unions will push hard for a surge in membership.

We hope this information inspires every business to strengthen employee engagement by improving leadership training and employee communication. It is a strategy for staying union-free now and in the future in the face of what will be ever-increasing union activity.