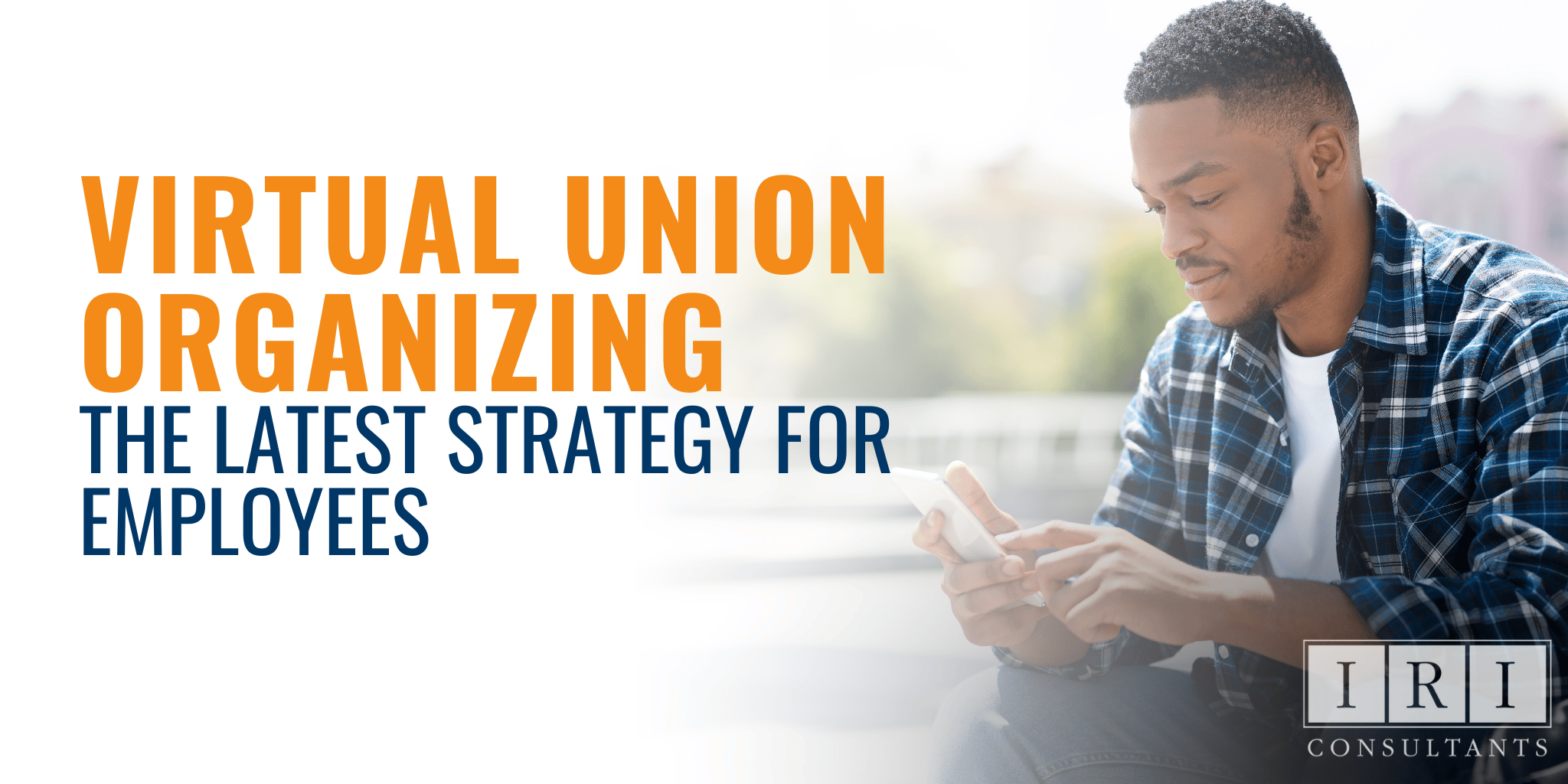 Before online connectivity, every stage of union organizing became apparent fairly quickly. Organizers had to hand out fliers, meet at the union hall, and knock on employees' doors. That was then, and this is now. Today, virtual union organizing is enabling workers to connect through websites, social media, and union organizing-focused apps. The approaches may vary but the goal is the same: giving unions the ability to organize online with ease.

Supplementing “Once Upon a Time” Union Organizing

The strategy unions used after years of success was simple, clear-cut and easy to see. There are five basic steps unions use to organize employees: spread the message, notify the NLRB, run an organizing drive, hold an election and negotiate a collective bargaining agreement. As UnionProof explains, there is a step-by-step process for a union campaign that has become relatively predictable over the decades.

Two events are significantly changing this "old-fashioned" form of organizing. The first is technology, giving people easy and private access to each other. The second is new generations of workers who embrace technology and have different perspectives about what employee voice entails and different expectations concerning management, work, and the workplace. Millennials and Gen Z have different ways of communicating. Social media, texts, audio apps, podcasts, and videos are more prevalent than any face-to-face communication.

So it's not surprising that new ways of union organizing appear, like Alt-labor and various online organizing platforms. The latest step forward is Unit, an online platform where employees can create their own legal labor union. Others are not labor unions as defined by law, but are employees organizing just the same. Younger generations of workers view the concept of organizing with a new perspective, making staying union-free even more challenging. Sites like unitworkers.com along with apps like Signal and Clubhouse make virtual union organizing easy, convenient, and largely, secret .

Getting The Message Out With Technology

Not long ago we discussed the Alphabet Workers Union (AWU), which was formed as a non-contract union, designed to address Corporate Social Responsibility. It isn't an NLRB-certified labor union. It is an employee group that agreed to pay dues and to have a single voice, similar to a union. Anyone can join the "club" that is connected to Google, including gig workers. A national union is helping the employees, of course – the Communications Workers of America (CWA). The virtual union organizing effort was kept silent for a year, and technology was the major enabler initially and is making rapid growth in membership possible.

A company called Unit of Work is now taking virtual union organizing to the next level, enabling the formation of an NLRB-sanctioned labor union.

Calling itself "a new kind of labor union." unitworkers.com is a kind of union in an app – that caters to younger workers. The platform and process are designed to encourage employees to participate by making the process of forming a legal labor union and negotiating a contract as simple as possible. It's meant to attract employees who don't necessarily want to get involved with a national union but have no idea how to organize.

Everything is done via the app:

Employees pay a fee of .8 percent of monthly earnings to Unit. Employees can also vote to pay additional union dues for their own projects, attorney fees, local union campaign costs, and/or social events. Reading Unit's webpage, "Common Questions About Unions," the explanations designed to justify unionizing point to the importance of developing positive employee relations by giving employees a voice.

Unit Union employees are free to affiliate with a conventional labor unit at any time, suggesting Unit might be working with the national unions. Unit of Work, Inc. developed Unit platform through the efforts of three people who have years of organizing experience per their online bios. They surely have connections in the major national unions and praise large unions' ability to "bring pressure against employers and support local unions."

It is interesting to note that Unit specifically addresses the common anti-union arguments and claims this new tech-based organizing approach is designed to eliminate the significant issues. For example:

The goal is for virtual union organizing to take place before the employer finds out. There is a growing number of communication apps that focus on user anonymity. Though not explicitly designed for creating a labor union, they are ideal for undetected communication. These tools also enable organizers to reach out to employees in any location and recruit support for their cause.

The nonprofit Signal designed a platform that enables secure messaging through end-to-end encryption. Privacy is built into the system, so only people in a particular conversation can see messages, videos, stickers, file transfers, photos, voice calls, and listen to and view video calls. It can handle up to 1,000 people on a group chat and up to eight people on a group call. The messaging app is so secure, even Signal's owners can't monitor whatever is shared. It also has a self-destructing messaging feature.

"We recently wrote about the Clubhouse App because it is indicative of the trend in social media in which a platform is designed to specifically bring together like-minded people," explains Jennifer Orechwa, COO, Projections, Inc. "Technologies like Signal and the Clubhouse App have a real potential to change how unions connect with employees and how employees connect with each other."

The apps are accessible via a computer, mobile phone, or tablet. Mobile apps make it easy for employees to communicate 24/7 and for unions to gain access to employees. It was more difficult when union organizers had to arrange meetings in a physical location to share information and get signatures on union authorization cards.

Turning the Tables with Technology for Positive Employee Relations

Unit Workers, like all virtual union organizing enablers, emphasize employee voice as a source of empowerment. They are using technology to support connecting employees in legal and non-traditional labor unions. Apps and other tech tools are used to develop online relationships, especially important in a workforce that consists of remote workers who can rapidly become disengaged.

Bottom line:  You can turn the tables on virtual union organizing and give employees access to the same type of communication tools - mobile apps allowing messaging, chat sessions, videos, pictures, file sharing, and most importantly, connection. Video calls and podcasts add a personal element. Giving employees and their families easy, 24/7 access to a fact-based dedicated website is a crucial union prevention strategy. Your site should include company positives, making the business case for remaining union-free, and fact-based information on the union. Add an FAQ page and the ability to ask questions anonymously, and you are offering the same opportunities as the emerging apps, maintaining your direct connection with team members.

Then train your leaders, providing skills to support employees and promote positive employee relations, employee engagement, employee voice, and employee empowerment. Employees need to be able to connect to each other and to managers and supervisors in meaningful and exciting ways.

The truth is the type of communication in an organization determines the culture. As Natalie Baumgartner, Chief Workforce Scientist at Achievers, wrote in a Harvard Business Review article, "While work cultures are unique to every organization, the foundation of what enables a culture to thrive is the extent to which employees are empowered to be engaged, feel valued, and be heard. This is where leadership comes in." She explains that leaders in a survey believed they were doing what is necessary to build and improve a positive culture, but 45 percent of employees said their leaders are either putting out minimal effort or are not committed to improving their organization's culture.

The recommendation is for leaders to prove to employees they want to create a positive culture by putting some of the power to impact culture into employee's hands by:

Positive employee relations are genuinely about having a culture of honest, encouraging, supportive communication. Technology is a powerful supporting tool. You want your employees to use apps as a source of support for the role they play in organizational success, a path to giving and receiving feedback, collaboration, and recognition – and not for virtual union organizing.

Unions are constantly seeking alternative ways to reach your employees. Apps are the current focus. As the unions and individuals with union organizing experience develop new ways to organize non-union employees, it's easy for employers to get complacent. Virtual union organizing apps have limited success to date, and in the meantime, employers read that unionization rates are declining. You may think that employees don't want a union.

Four things are making this perspective a risky proposition. The pandemic has brought change, but other long-term factors are very likely to see union membership increase. One is that millennials and Gen Z will continue to grow as a percent of the workforce, and organizing online makes sense for them. Second, the federal government's full force is backing unions for at least the next four years, pushing legislation like the PRO Act with other labor bills to follow without a doubt. Third, there are social and economic inequalities, and inequities are driving employees to find a collective voice to demand change.

Fourth, and finally, the use of apps as organizing tools is far from a mature strategy. It is very likely they will be increasingly used as people get more comfortable with the concept. This is a classic perfect storm of events leading to greater risk and more certification elections in the near future.