The Costs of a Coprorate Campaign | UnionProof.com 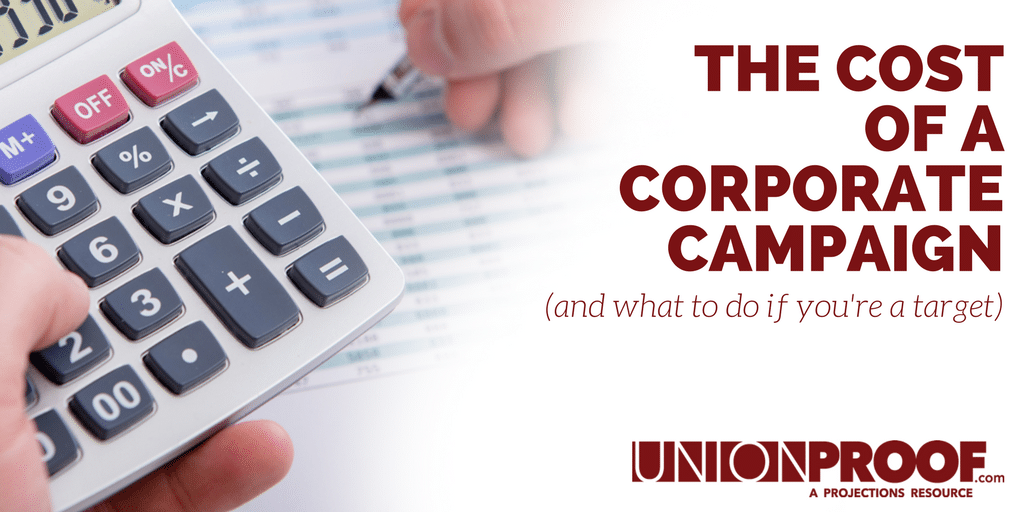 When a union initiates a corporate campaign, the costs can be high. A corporate campaign is a strategic effort by a union to put pressure on a company to unionize employees by damaging the company’s reputation and relationship with customers and all other stakeholders. Tangible costs are the measurable expenses realized, while intangible costs are the damage done to the brand in the marketplace and to the employer-employee relationship. The success of a union campaign depends on the union creating a negative company reputation. They do this by getting your employees to view their workplace through a toxic lens of dissatisfaction and unjust treatment, as well as by convincing the marketplace that a company is socially and economically unjust.

What Is A Corporate Campaign?

The history of the corporate campaign as a strategic tool for targeting employees goes back at least four decades. The movie “Norma Rae” starring Sally Field is based on the story of the birth of the corporate campaign, generally credited to Ray Rogers who, to this day, runs corporate campaigns. His website explains his company’s services. Corporate Campaign does research and strategic analysis, strategy development, media coverage, mobilizing, coalition building, and a lot more. It is a structured approach to organizing, so don’t be deceived by employees and others on television claiming to be grassroots demonstrators. If you hear your employees whispering his name, you’re about to become a target. The corporate campaign is strategic because there’s a calculated plan for achieving a future outcome: unionization.

Think of the corporate campaign as a union battle plan consisting of a series of tactical maneuvers. They include negative media communications, rallies or demonstrations involving employees and community members, websites attacking the employer, filing complaints with the National Labor Relations Board (NLRB), boycotts, card-check organizing, phone calls to regulatory agencies, soliciting national and local celebrities or people of influence, and walkouts. Card check is a union tactic in which the union secretly convinces a majority of your employees to sign union authorization cards that are then presented to you so that you’ll accept the union without putting it to a workforce vote.

Unions will use negative language in all of its communications and gives campaign names that are meant to suggest an employer is guilty of something or that employees are mistreated. The language is meant to inspire emotional responses, like ‘Justice for Janitors‘ and ‘Hotel Workers Rising.’ The latter is an ongoing UNITE HERE corporate campaign that also uses its website to drive people to unionized hotels, thus trying to steer customers away from non-unionized businesses. It’s the equivalent of an endless corporate campaign to cause financial harm to non-union hotels.

Corporate campaigns rely on intimidation to get results. The SEIU (Service Employees International Union) Contract Campaign Manual is a good read for employers because it’s a no-holds-barred description of tactics that unions are encouraged to use, including breaking the law under the guise of enforcing social justice in a manner similar to Gandhi and Dr. Martin Luther King.

The foundation of every corporate campaign is built on financial attacks. Unions will publicly and secretly spread lies about an employer to drive customers away. This has gotten much easier to do with the internet, but a few phone calls can cause a lot of damage. Sutter Health in California had to respond to union-triggered investigations from the IRS, FTC, NLRB, DSHS, DOD, and several other agencies. The union knows you’ll have to pay for attorneys to defend your company. The UNITE HERE union had organized Angelica Textile, a Sutter Health laundry supplier. During the Sutter Health campaign, the union mailed out 11,000 postcards to women warning them to not use Sutter birthing centers because they used dirty laundry. This was a direct attack meant to hurt the company’s relationship with the community.

The SEIU’s Sodexo corporate campaign is another good example of how unions operate and how employers can fight back. In this case, the SEIU launched a campaign called ‘Clean Up Sodexo’ and attacked the company in several ways. The union claimed the company pays substandard wages and has unfair labor practices. The SEIU arranged protests outside the Sodexo headquarters, but the campaign also used blackmail, extortion, trespassing, and illegal lobbying to keep customers away. Willing to take the lowest road possible, the union threw plastic roaches into food that Sodexo catered and threatened Sodexo USA employees with public exposure for wrongdoing.

How To Fight Back Against A Corporate Campaign

You can legally fight back. Sutter Health filed defamation charges against the union and won a jury-awarded $17.2 million. However, it was appealed and sent back to the original court. Sutter Health agreed to mediation, which led to a smaller award and an apology from the union.

Sodexo fought back by filing a lawsuit under RICO (Racketeer Influenced and Corrupt Organizations Act). The lawsuit claimed the SEIU was guilty of extortion by threatening financial damage unless Sodexo agreed to accept the union via card check organizing. The SEIU ended the corporate campaign, presumably because it knew it would lose in court.

The SEIU lost a jury case when the union was found guilty of wrongfully interfering with the business relations of Professional Janitorial Service (PJS) in Houston. The SEIU had filed 25 wage claims with the Department of Labor (only one led to a finding), saying PJS forces employees to work without pay, and 19 unfair labor practice complaints with the NLRB (all were resolved or withdrawn). The SEIU had also distributed handbills, made speeches and organized rallies, all claiming PJS withheld employee pay. The union had caused PJS to lose 12 customers, with one customer saying the union had occupied her conference rooms to object to the company hiring PJS. The company fought the SEIU in the Texas courts for ten years and in the end, the Texas jury delivered a $5.3 million verdict against the SEIU for wrongly disparaging PJS. In light of the extraordinary length of the case, the judge awarded another $2.5 million in interest.

The Costs of a Corporate Campaign

The lengthy explanation and examples of corporate campaigns help understand the enormous costs that employers incur when a union conducts a corporate campaign. You’ll need to dedicate significant resources to defend the company’s reputation through various means. Your company will have to pay an outside attorney or commit an internal one to working the case. You’ll also need to run an aggressive public relations campaign to address the union accusations, and that can include expensive print and television ads, as well as paying someone to manage social media to ensure the lies do not go viral without a response. You must respond internally via corporate training and development programs that truthfully set the record straight and address your company’s stand on unions. Some employers may choose to have employee meetings, requiring employees to stop working to attend. Human Resources staff will need to respond to more grievances.

The employer-employee relationship is damaged. Even if the employer is able to end the corporate campaign, employee engagement is harmed, and you’ll need to re-engage the workforce, incurring more union-triggered costs. There is a risk of employees leaving the company, either because the union convinces them they’re treated unfairly or because they want to avoid being involved in a workplace that’s a union target. During a corporate campaign, the workplace is at risk of developing a toxic culture in which people become angry, defensive, and resentful. Employees who choose to participate in a walkout will lower productivity.

There are intangible costs too. Looking at the big picture, jobs are lost when the company loses customers, impacting the economy. Other intangible costs include the increased reluctance of employees to have an open dialogue with their supervisors, so problems are allowed to fester; lower employee engagement levels; employees proactively looking for workplace issues or problems; and employees telling family and friends, via word-of-mouth and social media, that the company treats employees unfairly. This, in turn, makes it more difficult to attract skilled talent and to engage the community.

What If The Corporate Campaign Wins?

Sometimes employers let the union win out of fear the negative publicity will permanently harm the business. Corporate campaigns can seriously damage a company’s reputation and brand. The costs of unionization are even higher than the costs of fighting a corporate campaign.

Once your workforce is unionized, the company must dedicate ongoing resources to adhere to the union contract, while management time must be spent regularly addressing union-inspired grievances. There are many examples of a company that let the union in, and the union became a major contributor to its bankruptcy (think: Hostess).

Is Your Organization Vulnerable to a Corporate Campaign?

Sometimes the corporate campaign can produce positive results. For example, the campaign may bring to light a company’s lack of transparency about product content or a subcontractor that’s violating environmental sustainability policies. Labor activists contributed to Nike’s system of monitoring and remedying factory working conditions. The message is that you, as an employer, must take each union claim seriously and be proactive in making improvements if they are justified. Unions will always look for the vulnerabilities that are the easiest to exploit and will get the public’s attention, like safety or family leave policies.

In most cases, the negative results of a corporate campaign far outweigh the positive ones. The key is to identify and address your internal and external vulnerabilities yourself and make improvements. Don’t wait for a union to point them out. Developing high employee engagement levels is critical so that employees don’t whisper among themselves in the workplace or in the community about unionizing to address what they see as injustices. You want them to feel free to discuss their needs with their supervisors or other leaders as issues arise.

The best way to avoid a corporate campaign is to not, to the best of your ability, give employees any reason to talk to a union representative. If the union does start a corporate campaign, it’s imperative to try to convince them to end it by either addressing the issues publicly with an aggressive public relations counter-campaign to lower exposure or to make it so expensive that the union gives up. Other options include using a neutral mediator, leveraging a neutrality agreement by requiring the union to end the campaign to get your signature, or filing a lawsuit and partnering with local support organizations. Nothing involving unions is easy, but keeping it out of your workplace is a lot easier than decertifying it.