NLRB Decisions Based on Totality Of Circumstances | UnionProof.com 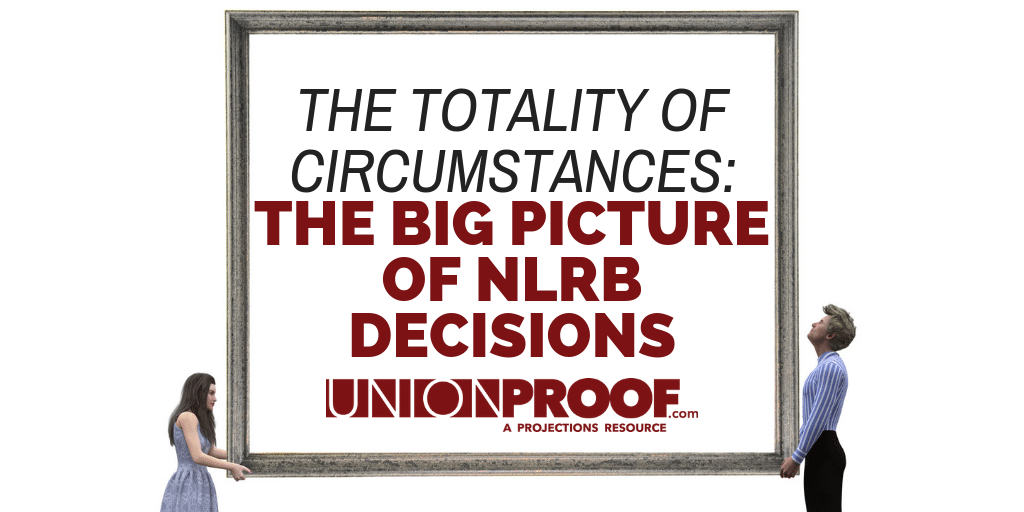 The Totality of Circumstances: The Big Picture of NLRB Decisions

“My manager made one mistake,” the employer says after an employee files a complaint with the National Labor Relations Board (NLRB), claiming her National Labor Relations Act (NLRA) protected concerted rights were violated. The question is whether it was one mistake or one mistake at the end of a list of behaviors that indicate the manager was not acting in good faith. The “totality of circumstances” standard refers to the full set of surrounding circumstances indicating that someone acted with a particular intent. Originally used to evaluate when “probable cause” existed for police action, the NLRB decisions have been made with the same principle in some of its cases, calling it the totality of circumstances nine-point factor test.

What are the Surrounding Circumstances of the NLRB Decisions?

It’s easy for you to get you into trouble when an employee’s protected activity is involved. In the case of Wright Line v. NLRB, an Administrative Law Judge (ALJ) said the NLRB General Counsel had to establish that the employer’s motivation for taking disciplinary action against an employee was directed at protected or union activity. In this case, a supervisor fired an employee, saying the timesheet had been falsified. It sounds like reasonable behavior, doesn’t it?

The employee agreed the specific times reported on timecards for work tasks may not have been accurate, but said he did work the full shift and got the work done. This happened during a union organizing campaign, so the employer’s motivation for terminating the employee came into question. What were the surrounding circumstances of the event in question? In this case, the final paycheck had already been cut when the employee was asked for an explanation, and the employee was a leading and active union advocate. Also, no employee had ever been fired for similar behavior in the past. In the judge’s opinion, the employer was clearly interfering with NLRA Section 7 protected concerted rights.

Determining motivation is not always easy to prove, so the court uses a set of general factors as a guide. They include the timing between the employer’s actions and the employee’s protected activity; if there was a delay of discipline, indicating the adverse action was taken outside normal procedures; there was a departure from company disciplinary procedures; the employee received disparate (unusual or different) treatment; the penalty doesn’t fit the circumstances, like being too harsh; and the employer gives different reasons for the discipline (lack of consistency). When enough of these factors are present, the NLRB and judges will believe the employer administered disciplinary action because of an employee’s protected activity. That was the decision in the Wright Line case.

Social Media and the Totality of Circumstances

Two days before a union election, when tensions are running high, a Pier Sixty supervisor gave instructions to food server Perez and two other employees. The NLRB described the event by saying the employer used a “harsh tone” and gave instructions like “stop chitchatting” and “spread out, move, move.” Perez got upset and wrote a social media post, calling the supervisor a vulgar name and encouraging employees to vote for unionization. Though Perez removed the post after three days, management fired him after investigating.

The NLRB decisions regarding Pier Sixty were that they had violated NLRA sections 8(a)(10) and 8(a)(3) by terminating Perez in retaliation for protected activity. These sections prohibit an employer from interfering with an employee’s Section 7 rights. The Second Court agreed, saying a nine-factor totality of circumstances test in social media had emerged.

The 9-Point Totality of Circumstance Test for Social Media Considers:

Final Decision: Sum of the Circumstances

Though there have been other cases addressing the totality of circumstances with NLRB decisions, these two cases give a clear picture of what the term means. It’s not the single acts or words of your supervisors that are assessed. It’s how they act and talk on a routine basis and especially when there is union activity. That means it’s critical for your leaders to be properly trained on these kinds of topics, to know how to engage employees in a positive manner with good communication skills, and to understand how their words and actions have a direct impact on the ability of your business to stay union-free.