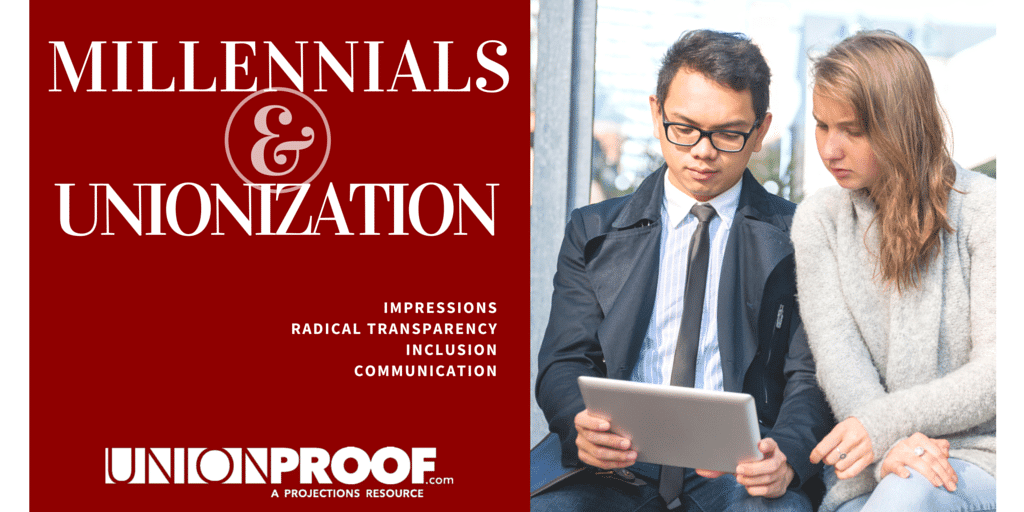 Millennials, born between 1982 and 2000, are one of the most studied generations, and for good reasons. There are approximately 83 million of them according to the U.S. Census Bureau, outnumbering even the baby boomers. Millennials are also now the largest generation represented in the workforce, already accounting for one of three workers. By the year 2025, they are expected to account for 75 percent of the workforce. For employers to stay union-proof, it is crucial to understand the overall link between millennials and unionization, since recent studies indicate they like labor unions.

Millennials have been described in many ways, including as collaborators, passionate about ethics and social causes, and abhorrent of corporate hierarchies. It should come as no surprise that they are showing approval for unions that present themselves as watching out for the employees abused by corporations (social cause), able to negotiate for the common good of the workforce (collaborators) and willing to take on powerful corporate leaders (hierarchies). The Pew Research Center conducted a survey in late 2015 which found that 57 percent of millennials surveyed believe labor unions have a positive impact on the U.S. Compare this to 42 percent of Gen X and 41 percent of baby boomers.

Their favorable impression of unions developed out of the impacts of the Great Recession. They grew up and entered the workforce during a time of economic upheaval. There were large corporate layoffs and protest groups, like Occupy Wall Street, that convinced many of them that corporations do not pay enough, offer little job security, only care about working conditions when forced and reward senior leaders on the backs of their employees. Every day you can turn on the television and find millennials protesting things like the minimum wage, working hours, lack of diversity in management and generally greedy employers.

Millennials see power in uniting together to tackle a common causes. Unions, naturally, see this younger workforce as a new opportunity to change the tide of declining union membership. According to the U.S. Bureau of Labor Statistics, the union membership rate was 20.1 percent in 1983 and 11.1 percent in 2014. However, it remained unchanged from 2014 to 2015, which makes unions hopeful the trend is ready to go in the other direction.

Naturally, they are looking to millennials as their best hope. One thing that makes unions optimistic is the fact that millennials are showing signs of supporting greater unionization in the services industries. Unions have their roots in a manufacturing economy, but the U.S. economy is transitioning to a service economy. Job growth is highest in industries like healthcare, social services, retail, finance, insurance, transportation and technology. For unions to grow their membership, they must convince millennials that unionizing is a good decision. They have already had some successes too. Young, educated and professional editorial employees at Gawker Media joined the Writer’s Guild in the summer of 2015. In 2014, 2,135 graduate students at the University of Connecticut voted in a union under the auspices of the United Auto Workers.

Learning From the Millennials

Gawker Media professionals shared the reasons they decided to organize, offering employers a path to developing strategies to keep their workplace union free. One reason is that the millennials believe in “radical transparency” and want everything discussed openly. Employers need to become better leaders and develop high quality, efficient and transparent communication systems that give employees access to leaders and gives leaders a means of sharing company information. The millennials want things like pay and raises set in a fair and transparent way, and they want transparency and participation in decision making (remember their desire to collaborate).

The Gawker Media editors also wrote, “Every workplace could use a union,” believing only a union represents employee interests and gives employees a mechanism for joining together to bargain with power. You can union proof your workplace by engaging all employees and making them feel included and important, but millennials are changing the way to best accomplish that goal. Unions recognize they must change their strategies, such as visiting campuses to explain unionization and increasing transparency in their own organization, so employers must adapt too.

For example, millennials are digital natives and communicate through technology, and see technology as a tool that can support their desire to collaborate. Savvy employers will take advantage of things like video, eLearning, social media and websites to improve engagement. Before the union can get to new hires, for example, you can engage them with an interesting, customized employee orientation program, communicate benefits and maintain morale with excellent communication tools. Customizing the programs and tools that appeal to millennials is an excellent way to connect with them before the union does.