How To Revoke A Union Authorization Card | UnionProof.com 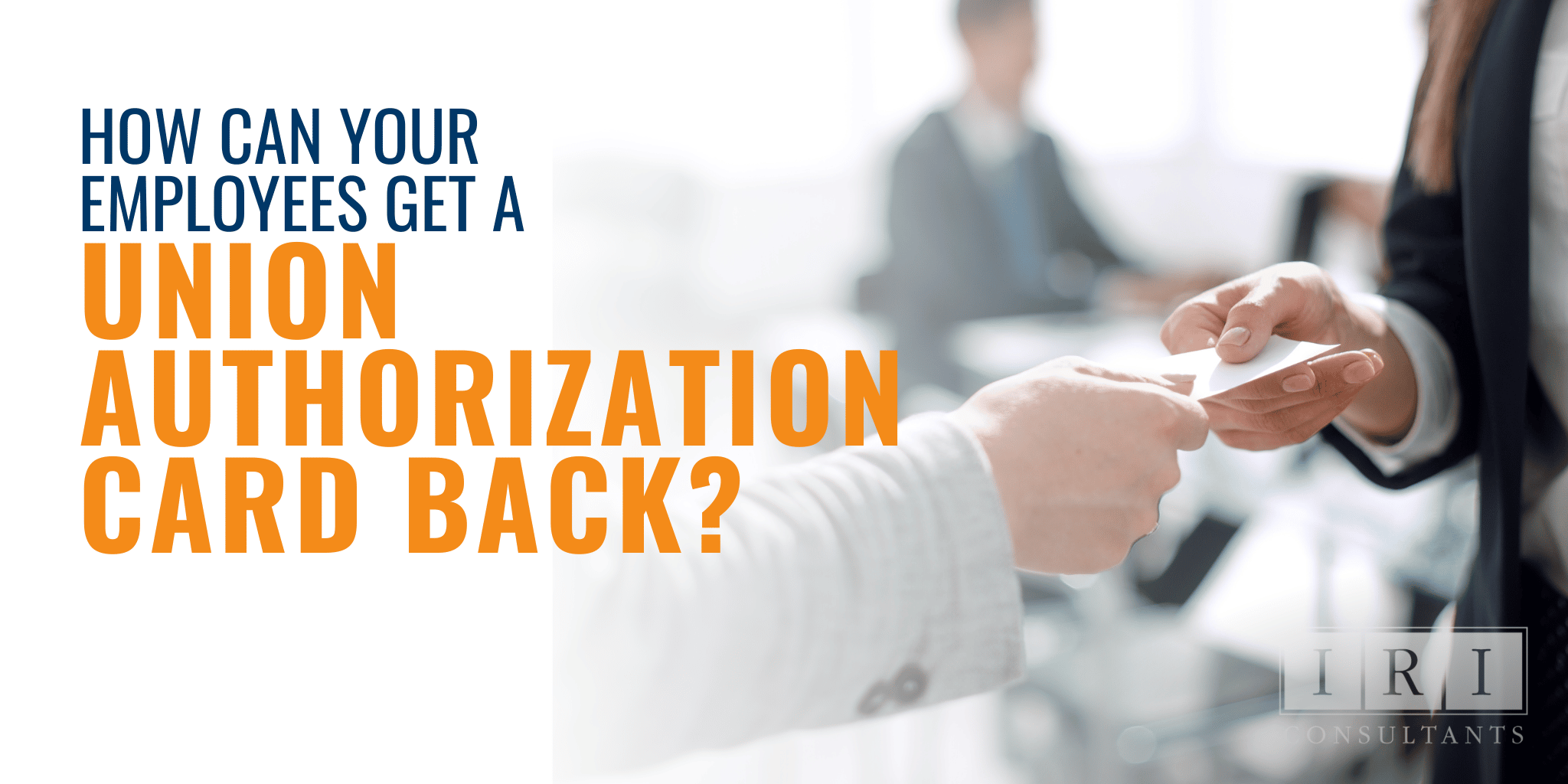 How To Revoke A Union Authorization Card

"Go ahead and sign the union authorization card now, so we can send a message to your employer that you aren't going to take it anymore," says the union representative to the employee. "It's not a permanent commitment because we still have to hold the election, and you can vote however you want when the time comes." So the employee signs the card and later wonders, “How can I get a union authorization card back?”

The situation above is not uncommon. At UnionProof, we are focused on building strong corporate cultures where unions are unneccessary. We offer companies trusted, innovative, comprehensive, employee communication resources that keep them union-free while inspiring and motivating their employees.

We understand that difficult situations in the workplace may come up where your employees feel a union could be an option. Our hope is that by writing this, you will be fully informed on how your employees can get their union authorization card back if necessary. You should feel confident educating your employees on their rights as well.

A Union Needs 30% To Start The Petition-To-Election Process

A union needs at least 30 percent of employees in a bargaining unit to sign a union authorization card. That is the magic number for starting the union election process. This begins when the union petitions the National Labor Relations Board for an election.

There is also an alternate path to unionization called "card check". The union can try to convince the majority (50 percent plus one employee) of employees to sign an authorization card. In that case, the union can demand recognition, meaning the employer is asked to voluntarily recognize the union without an election. If the employer agrees, the union becomes the bargaining representative for six to twelve months before its status can be challenged.

So, of course, the union wants to try and get over 50 percent of employees to sign the cards. It isn't difficult to imagine the pressure placed on employees by union representatives and their coworkers who support unionization. It's what employees may not know that really matters.

Your pressured employee may sign a union authorization card and then have second thoughts. Some employees change their minds because they discover they don't really need the union. The employer simply needed to share more information about the full impact and cost of unionizing. Other employees are just uncomfortable supporting the union after they learn more about their operations and behaviors. There will be employees who believe they made a rash decision just to get everyone to leave them alone.

Make Sure Employees Know Their Rights

Your employee was under initial pressure to sign the union authorization card. This means your supervisors and managers should understand that the pressure to convince your employee not to revoke the signature will be just as intense.

The employee may ask how they can get their union authorization card back, but the union is unlikely to honor the request. The union representative may say, "You can't have it back," or "It's too late." What then?

The first step is to make sure your employee knows he or she can put the request in writing and send it to the union. The letter will say the employee is canceling and revoking the signature, card, or authorization given to the union. Be sure to name the specific union.

Signing and dating the letter is important, and a best practice is to send it through the U.S. Post Office and request a signature and return receipt. Paying a small price for proof of delivery prevents the union from claiming it never received the letter. Labor law professionals also recommend sending a copy of the letter to the National Labor Relations Board and even the employer, to keep the union honest.

Your Employees Can Revoke Their Signatures

An employee has the right to revoke any signature on a union authorization card or petition (a group of employees). In a somewhat opposite situation, an employee may sign a petition to withdraw union support at the end of a contract which can trigger an "anticipatory withdrawal" of union recognition by the employer. The employee could decide to revoke his or her petition signature before it gets to the employer, believing the signature was forced in some manner.

In the 2019 Johnson Controls case, the NLRB determined that proof of a union majority loss must be unequivocally clear before an employer can withdraw recognition of the union without liability. Petition signatures that can lead to an anticipatory withdrawal or a decertification election have real value for the employer. In 2018, there were 337 decertification petitions filed, and 159 led to elections. Of the 159 elections, the unions won 50 times and lost 109 times.

The employees who don't want to publicly revoke their signature out of fear of union or coworker harassment need to understand that they aren't obligated to vote for the union. Voting is confidential. Make sure employees know that actually voting "no" is important and not just abstain from voting. The election results are based on the total number of people who actually vote, not total number of eligible voters.

Inform - But Don't Ask or Assist

To avoid unfair labor practice charges, as an employer, you must be very careful about what you say and do. You can inform your employees about the process for revoking a signature. You can't ask or encourage your employees to do so. It must be made clear that employees can and should make their own decision without interference, pressure or harassment by the union or the employer.

If an employer appears to be interfering in the employee's right to freely decide, the revocation will be disallowed. Employers may make employees believe there will be some kind of retribution if they don't revoke their signatures. The same applies if an employer promises some reward if employees get a union authorization card back, like raises or special events.

In an Ohio food processing case, the employer circulated a flyer, telling employees they could withdraw their signed authorization cards from UFCW (local 75). The employer then included a “revocation form” they could complete and return to the union.

Because the employer had engaged in previous egregious unfair labor practices (ULPs), the NLRB decided the company could not tell employees how to get their union authorization card back. This ultimately created an atmosphere of fear. Validated ULPs can haunt an employer in many ways, including when employees want to get a union authorization card back.

RELATED: "CONTROL+Z: GET YOUR UNION AUTHORIZATION CARD BACK"

It's almost impossible to predict how the NLRB or an Administrative Law Judge will decide cases. Trends change with each new board appointment or new administration. It proves once again that your leaders must have a deep knowledge and understanding of legal ways to stay union-free. They must also keep the workforce fully informed of their rights without conveying any sense of coercion. This is why so many companies are using video, web and eLearning solutions on a routine basis to connect with the workforce.

Engage your employees on a regular basis and develop positive employee-employer relationships. You'll be much less likely to have to deal with union authorization cards in the first place.

Employees can be informed of how to get a union authorization card back. It's everyone’s right to be fully informed of their choices and the correct, legal actions to take. As their employer, be sure you let them know their rights in a legally acceptable way.