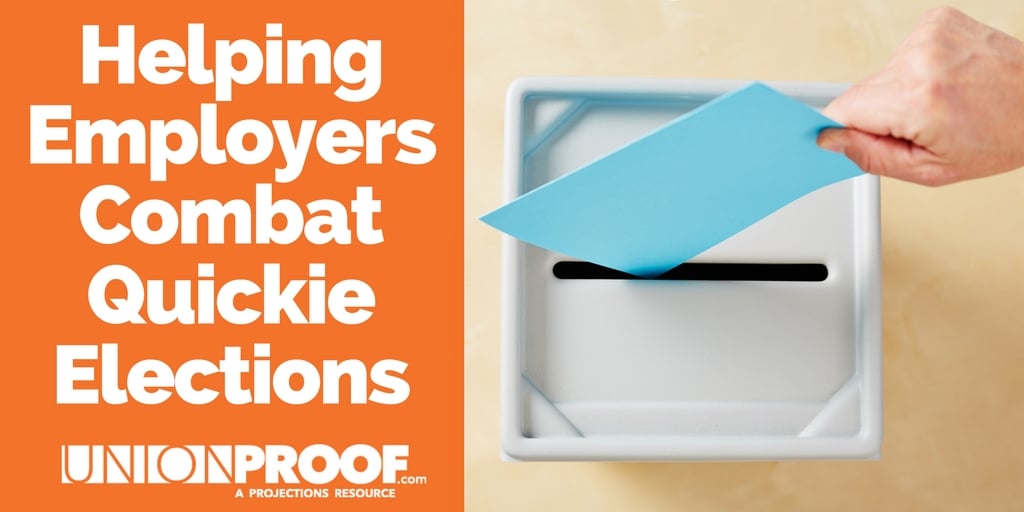 Congress entered 2010 with a very long agenda, and that wish list is almost certain to include labor’s top priority: the Employee Free Choice Act. The bill has slightly changed form over the past year, but it’s danger to business exists nonetheless. Today, smart companies are using proactive strategies to reach their employees before the union organizer does.

On the 2008 presidential campaign trail, Barack Obama spoke about the need for the Employee Free Choice Act on many occasions. Combine that with his support from labor unions, and passage of the bill in 2009 seemed very likely. However, the bill was put on the backburner for much of the year as Washington dealt with the economy and health care legislation.

Multiple labor leaders have said we will see movement on EFCA in 2010. Sen. Tom Harkin (D-Iowa), EFCA’s the lead sponsor in the Senate, has confirmed that the bill is still alive and talks are on going. Those talks are where the Employee Free Choice Act legislation gets interesting.

The original purpose of EFCA involves three main components: replacing secret ballot elections with card check elections, instituting mandatory arbitration if collective bargaining is unsuccessful, and increased penalties for employers who violate labor laws. The card check portion received most of the publicity, and a great amount of negative attention.

As a result, Senators retracted their initial support for EFCA last spring. (A vote was taken in the Senate in 2007 with all Democrats supporting the bill, when everyone knew it would not pass and that then-President Bush would veto it). Arlen Specter, then a Republican, also supported the bill in 2007, but later announced that he could no longer support the bill in its current form. He has since joined the Democratic Party and modified that position; once again, saying he now supports an EFCA compromise bill.

But Specter is not the only Senator to keep an eye on as EFCA talks resume in Washington. We have seen other Senators express reservation about the bill: Dianne Feinstein (D-CA), Thomas Carper (D-DE), Blanche Lincoln (D-AR), Mary Pryor (D-AR), Ben Nelson (D-NE), Mary Landrieu (D-LA), Michael Bennet (D-CO), Mark Udall (D-CO), Evan Bayh (D-IN) and Mark Warner (D-VA). In some form or fashion, these Senators have urged caution with the bill, specifically when it came to card check. They have simultaneously hinted at the need for some sort of labor law reform.

Keep in mind that the Employee Free Choice Act would need 60 votes to overcome a filibuster in the Senate – the exact number of seats the Democrats hold. With no Republicans supporting EFCA, its proponents need to hold every member of their caucus. It would take just one of the previously mentioned Senators to de-rail the bill.

So, these reservations on EFCA in its current form gave life to a compromise bill of sorts. Rather then replace the secret ballot with card check; the compromise version includes so-called “quickie elections.” Today, the traditional election is held about 42 days after a union files a petition with the NLRB showing the adequate number of signed authorization cards. “Quickie elections” would be held within a ten day window. Unions contend that the current timeline allows companies to influence the election results by speaking out against the union; while businesses argue that the time period is necessary to educate employees and counter the pitch from union organizers which may have been going on “underground” for months, or even years.

This quickie election scheme is modeled after Canadian labor law, where a number of provinces hold elections within 5-10 days of the petition. John Mortimer is President of the Canadian LabourWatch Association, and is an expert on Canadian labor law. He wrote an essay on the topic of expedited elections recently, and offered this assessment:

“(In a shorter election timeframe) Employers don’t have enough time to question union claims, openly debate the issues, hear from employers, clarify the facts or effectively express their concerns to each other. Similarly, employers have a very limited time frame to respond to union claims and provide employees with accurate, balanced information.”

Mortimer concluded by saying that “expedited elections will require that employers be proactive in educating managers and employees and in their communications efforts.”

One of the main problems employers have encountered with responding to the Employee Free Choice Act is the fact that its final outcome is not known. We simply do not know exactly what the final bill will look like.

Projections, Inc., a leader in employee communications for 30 years, recently released their latest product designed to combat EFCA regardless of the form it takes. Their new video and web kit, “The Essentials” includes resources that are designed to combat any union campaign, and even to educate employees on unions prior to any organizing activity. The 5 DVDs in the kit cover topics including organizing, bargaining, job security, and strikes, as well as including union-specific program. The Essentials also includes an educational union-specific companion website that is available to employees and their families 24 hours a day.

Walter Orechwa, Owner and CEO of Projections, Inc., stressed the importance of The Essentials in this new changing world of labor law. “A lack of experience in dealing with union organizing campaigns can make employees more susceptible to promises of more money, or better working conditions, or whatever similar issues a union organizer might promise to address,” Orechwa said. “The Essentials fills the employer’s need to train and educate employees, so that those employees may make an informed decision about unionization.”