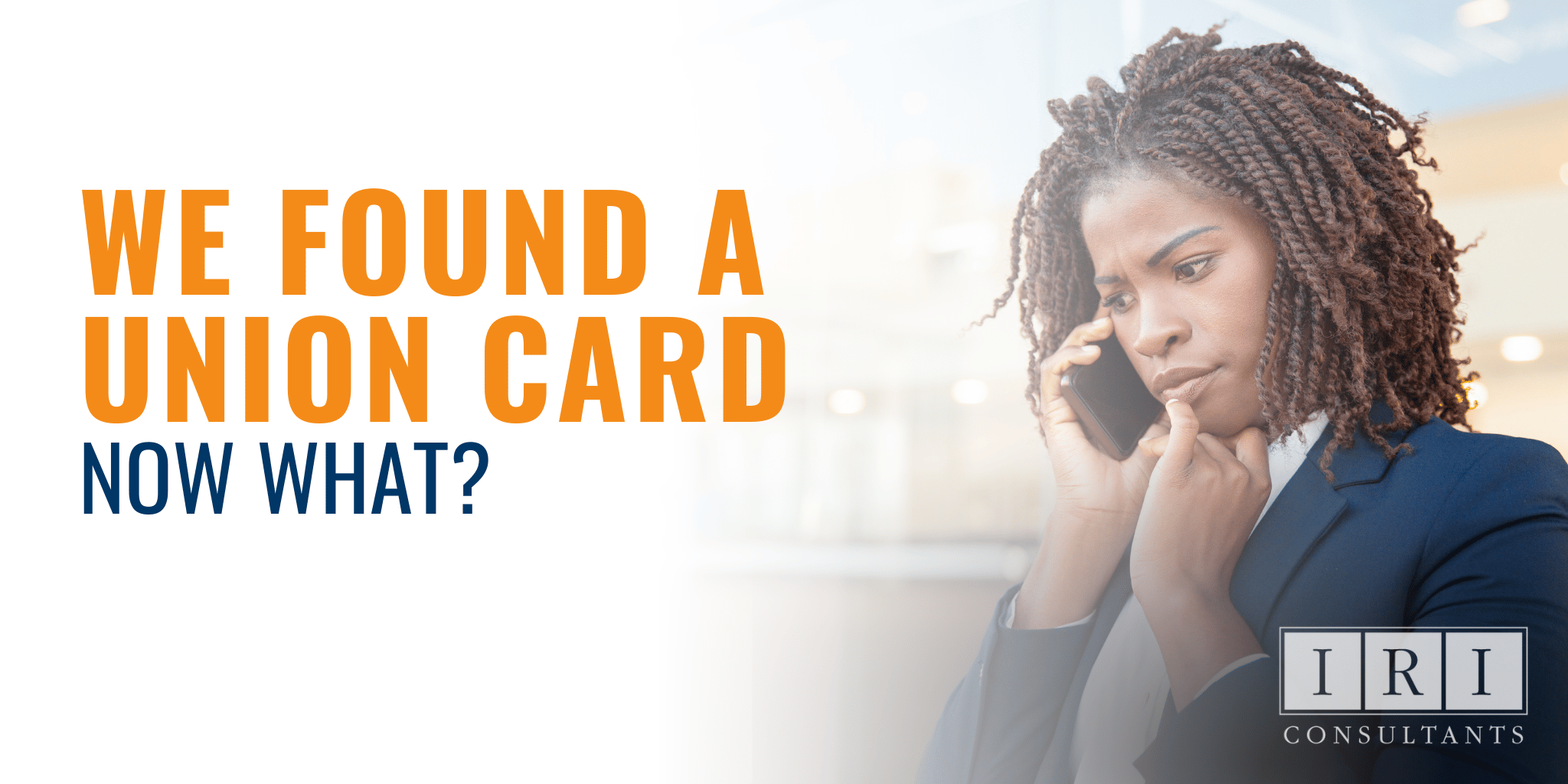 “We Found A Union Authorization Card, Now What?” – Preventing a Union Card Check

Table Of Contents
1
One Misstep Can Lead to Unionization
2
Carefully and Thoroughly Follow the Steps after Finding a Union Authorization Card
2.1
1. Investigate
2.1.1
Collaborate With Your Supervisors
2.2
2. Assess The Situation
2.3
3. Strategize
2.3.1
Keep Your Employees Educated to Prevent a Union Card Check
2.3.2
Be Prepared with the Facts
2.4
4. Act
3
Opportunity for Transparency

Looking for an employee, you casually walk into the breakroom to check for the person, and there it is - a union authorization card laying in plain sight on one of the tables. The card is a form the employee signs to designate a particular union as a bargaining agent. Feeling at a loss as to what comes next is a normal initial reaction, especially if you had no idea your employees were talking to union representatives. It only takes 30 percent of employees in a bargaining unit to sign cards for the National Labor Relations Board to agree to hold a union election. It takes 50 percent plus one employee to give the union the right to demand you accept the union without holding an election. This is called a union "card check," and while you aren't likely to agree to it, it's better to never reach that point.

One Misstep Can Lead to Unionization

What are the implications of finding the union authorization card and knowing where it could lead? First, you mentally prepare for tackling a process to legally convince employees that joining a union isn't a good decision. Like unions and employees, employers do have legal rights, and they're designed to keep the union campaign as fair as possible for everyone involved. A union card check (also can be referred to as a majority sign-up) is a method for employees to organize into a labor union in which a majority of employees sign authorization cards, stating they wish to be represented by the union.

What is critical is that you don't start making accusations or off-the-cuff remarks because this makes it more likely you will be accused of unfair labor practices, creating a "chilling effect" or discouraging employees from exercising their NLRA Section 7 & 8(a)(1) rights to self-organize. One misstep is all it takes. For example, running out of the break room to interrogate whoever you think may be involved is a sure way to create a chilling effect and will inevitably lead to a formal complaint being filed with the NLRB.

Always staying within the limits of the law is crucial to staying union-free and avoiding expensive NLRB cases. There are four methodical steps to follow that will guide you through the process for legally responding to attempts to unionization. It's only four steps, but each includes a set of critical activities.

You found the union authorization card, and it's time to put an action plan in place to respond. The card's appearance likely means some of your employees have been meeting for a while with union representatives. The four steps in a solid legal action plan are: Investigate, Assess, Strategize, and Act when it comes to a union card check process.

Investigating union activity requires knowledge of the law and NLRB decisions concerning the questions/statements employers can make. To make it simpler to remember what is allowed, think of the acronyms T.I.P.S. and F.O.E.

Keeping the two rules in mind, you can ask employees questions in a non-threatening and non-interrogatory manner. You're advised to consult a labor attorney so the person is involved from the beginning of the process. They can provide guidance through the four steps and assist with developing an accurate assessment of the situation.

Carefully choose the employees you talk to. Remembering the consequences of creating a chilling effect, the purpose is not to interrogate employees about union activities or to criticize unions. It's to find out the reasons employees are talking to union representatives and how a union card check could happen. You can ask trusted employees if they know of employees who are upset with anything. This includes everything from policies, schedules, pay, benefits, supervisors, and so on.

Collaborate With Your Supervisors

You should also talk to supervisors, and ask them if they have observed unusual employee behaviors. There are innocuous signs of union organizing activity that are overlooked until a holistic view is taken. For example, employees take long breaks together and suddenly quit talking when a supervisor walks into the break room. Are employees lingering in the parking lot and involved in deep conversation among themselves or with non-employees? It's the change in behaviors that indicate potential union activity.

Also, ask supervisors if they have noticed a change in employee language. Increased use of typical union and NLRB words indicate employees have been talking to union representatives. Words like "grievance," "just cause," "arbitration" and "seniority" are the language of unionization. Employee language gets more formal too. For example, an employee would normally say, "I don't understand this schedule change. Seems unfair to me. Think I'll complain to my supervisor!" becomes "My supervisor violated my rights, so I'm going to file a grievance."

Another indication that employees are considering organizing is when your managers begin began receiving reports from frontline supervisors concerning employee defiance. Additionally, employees may be unusually cool towards or avoid management, regularly challenge work rules, express unhappiness with even small changes in the workplace, and project a sense of resentment of management. A workforce that has been cooperative in the past, and willing to communicate with their supervisors, adopt a we-they attitude.

Employee engagement is crucial to keeping unions out of the workplace and preventing a union card check. When employees decide to listen to unions, it may be they have been disengaging over a period of time. This occurs for many reasons.

Perhaps your organization implemented policy changes in benefits, hours of operation, work rules, pay scale, or any of a variety of perks. Have employees expressed frustration or anger surrounding any known issues? Sometimes, it is a matter of poor communication between employees and management, and the employee-employer relationship erodes over time. However, lowered engagement levels could also be due to a general change in an organization's culture. If employees perceive the culture as less supportive or even negative and begin to develop the we-they attitude in which its employees against management, unions are likely to make an appearance.

You must ask yourself if there any other factors, internal or external, that might have played a role in the union getting a foot in the door. Did a competitor's business recently unionize? Did your company reorganize? Are your supervisors well-trained on your union-free philosophy? Did you hire unpopular managers? Do managers know how to respond to complaints, engage employees and explain the union-free philosophy? Your company may have inadvertently allowed itself to become vulnerable to union organizing by not transparently addressing internal and external factors.

An assessment should also try to discover the status of the union campaign. The authorization card you found in the break room may be a single card or one of many. How far along is the campaign? Is the union campaign just getting started? Or is the union getting close to enough signed cards to move ahead with an election? It's not easy to get the answers you seek, but it's important to try.

After investigating and assessing the situation, it is time to develop a strategy and an implementation plan. The strategy and the speed of implementation depend on the status of the unionization effort. Your supervisors need to be knowledgeable of events and know how to go forward with answering employee questions, promoting the advantages of working for the company, and communicating the employer's stance on unions. Your supervisors are the frontline and mid-managers who work directly with the largest number of employees. They are the people who have the most influence over employees. They get the first opportunities to recognize the signs of unionization and can prevent a union card check. Your supervisors can help keep your company union-free.

You need to provide your supervisors with the tools and information that enable them to answer employee questions with accuracy and without violating the law. The tools include web-based training programs, like videos and eLearning programs. It's important to regularly update the information, so supervisors have the most powerful and accurate information available at all times.

Keep Your Employees Educated to Prevent a Union Card Check

Another strategy for avoiding unionization is keeping all your employees educated on unions. Chances are many of your employees need to learn about the National Labor Relations Act and the rights, roles, and responsibilities of employees, employers, and unions. Unions are experts at organizing. Like salespeople, they know what to say and how to present themselves in a convincing manner.

One common approach of unions is to minimize the value of an employee's signature on the union authorization card. For this reason, it's critical to educate your supervisors and employees on the facts about union authorization cards. They need to know what they are, what they mean, and why the employee signature is so valuable to unions. Unions like to convince employees to sign cards by saying, "Just give it a try. You can always vote the union out later." What they don't tell employees is that it's difficult to decertify a union once it's in place, and decertification can turn into a very long process.

Be Prepared with the Facts

Supervisors need to understand the full ramifications of employee signatures on authorization cards for the simple reason they need to be able to respond when an employee says, "My signature doesn't mean I'll vote for the union during an election." The employee clearly doesn't fully understand the union strategy, how unions operate, and the potential consequences. Your supervisors should be able to explain, in a non-threatening manner, all the implications of signing the card.

Well-prepared employers have a "dark" website always ready for fast launch. The dark website is an employee-focused communication tool designed to educate employees on union facts as well as sharing the company's philosophy on unions. Some companies keep the website dark until a union campaign starts. Other employers make it live immediately after development as part of their strategy to educate workers on their union-free philosophy. The strategy you implement depends on your unique situation and culture.

With a strategy and execution plan prepared, it is time to act. Following are a series of steps in an action plan:

Don't just show the videos. Give employees opportunities to ask questions and hopefully provide insights on why they're interested in unionizing. Transparency is important. One reason employees talk to unions is because they believe their employer is not open and honest about things like its policies and goals. Finding the union authorization card gives you an excellent chance to act transparently.

Anything to do with unions is complicated because of both the legal implications and the emotional aspects. However, finding a union authorization card in the breakroom does not automatically mean unionization is a sure thing. It's part of your obligation as an employer to meet your employees' need for information, education, and transparency. This is the best strategy to prevent a union card check and keep your workforce union-free.