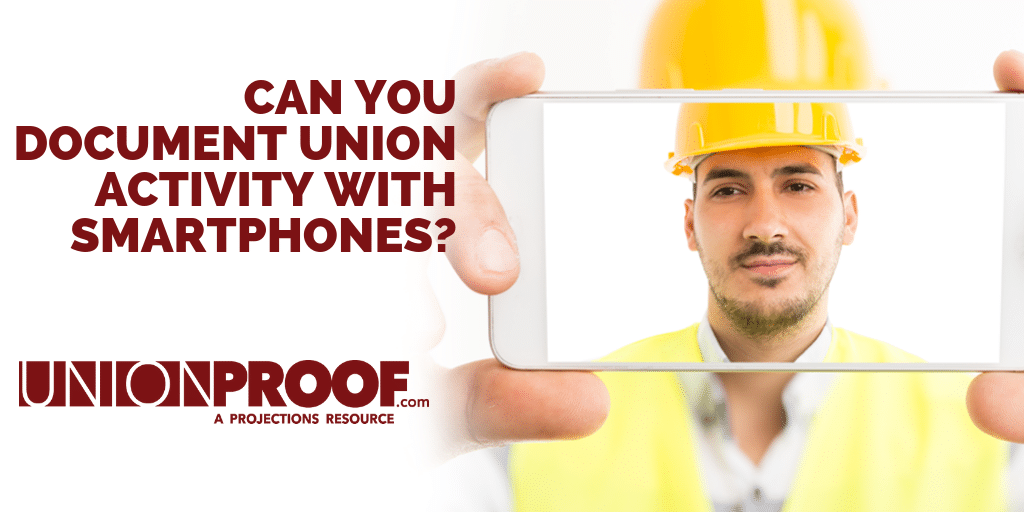 It was easier decades ago to identify “unfair labor practices” prohibited by the National Labor Relations Act (NLRA) Section 8(a)(1). Technology has complicated the issue because it’s always available and can be used surreptitiously. Your supervisor can whip out a smartphone and take a picture or record video of employees without their knowledge, and the next thing you know there’s a union complaint filed with the National Labor Relations Board (NLRB). Many workplaces document union activity by having video systems installed, and the videos are archived for viewing at a later date, if necessary. Recent cases concerning the monitoring of union-related activities, on and near employer property, serve as a reminder there are specific rules employers must rigorously follow concerning employee surveillance when union activity takes place.

Does Your Employee Surveillance Serve To Intimidate?

On May 8, 2018, The NLRB affirmed an Administrative Law Judge’s decision in the case of Brasfield & Gorrie, LLC, and United Brotherhood of Carpenters and Joiners of America (UBC) (09-CA-199567). Briefly, a subcontractor’s employees chose to not report to work because they believed they were being underpaid. They stood on the sidewalk across from the worksite all of one day, and the next day they formed a picket line at employee entrances. Union representatives also blocked traffic with their trucks.

The Senior Safety Manager John Wickham witnessed these events. The union claimed he used his smartphone to take pictures or videos on the first day, a claim he denied. The second day Wickham did admit to taking pictures of the picketers at workplace entrances and also made a video of the union agents using their trucks to block traffic. The union said the employer was wrong to create an impression of employee surveillance on the first day and conducted unfair labor practices the second day. Note the people involved in picketing were subcontractors and not employees on the payroll.

In the decision, the Judge found there was no credible evidence to support the claim of surveillance on the first day. It was the iPhone pictures taken on the second day that became the issue. Previous NLRB decisions held it’s an unfair labor practice for an employer to surveil employees engaged in union activities when observing them is out of the ordinary, making it coercive. Unlawful surveillance or an impression of unlawful surveillance is determined by considering whether the employer’s behavior is designed to interfere with, restrain, or coerce employees in the exercise of their protected rights. There must be a legitimate justification for employee surveillance of statutorily protected rights, and simply wanting to stay union-free by scaring employees isn’t acceptable.

This case outlined the principles governing employee surveillance via photographs or videos. An employer is allowed to observe, without taking pictures, union activities taken place publicly. Unions will assume that employers taking pictures of employees are trying to document union activity and want to make employees fear they’ll be punished at a later date and to discourage union activities. You cannot take pictures or videos to intimidate employees or just because you believe something is going to happen in the future. You have to be able to justify the belief that misconduct will occur.

This creates a standard for “anticipatory misconduct” versus a standard for “as it is occurring.” Wickham often stood at workplace entrances to greet employees, so his behavior on the second day wasn’t out of the ordinary. He also frequently used his phone to take pictures of safety risks to employees. There are situations where taking pictures of union-related activities is justified. You can photograph strikers to use for legal purposes, as long as you don’t make any threats. You can take pictures and videos of picketers if they are trespassing, obstructing traffic, or blocking workplace entrances. The key is to document union activity and take the pictures AFTER the blocking actions begin, and don’t make assumptions about employee behaviors beforehand. In the Brasfield & Gorrie case, the trucks blocking traffic were preventing deliveries and people from reaching the job site.

The Judge decided for Brasfield & Gorrie because Wickham took photos and videos while the activities were occurring and was not making assumptions about what might happen. The NLRB concurred with the decision.

Now consider the July 19, 2018 Judge’s decision in the case of AdvancePierre Foods, Inc. and United Food and Commercial Workers Union, Local 75 (09-CA-153966). In this case, employees contacted the union about organizing 600 food workers. Employees began distributing union literature and authorization cards close to the food plant. The employer became aware this was going on and decided to act.

The Judge found that AdvancePierre Foods unlawfully surveilled union activities in violation of the NLRA Section 8(a)(1). The employer was also found to have unlawfully disciplined employees in violation of Section 8(a)(3) and (1) and unlawfully interrogated some employees about coworker union-related activities. Though the employer should have known that soliciting revocation of union authorization cards was a violation of the employee’s protected rights, it’s interesting to note that reviewing old video footage was considered illegal surveillance because it was specifically reviewed to identify employees conducting union activities so they could be stopped. The review wasn’t about issues like worker safety or identifying ways to improve job efficiency.

There is so much to learn from just these two cases. The first lesson is that every supervisor’s behavior will be closely scrutinized by unions. Wickham routinely stood at employee entrances and routinely used his smartphone to take pictures at work, so doing the same during the two days of union activities was not unusual. It’s important to always respond in a legally justifiable manner, and that can get down to analyzing routine behaviors so the union cannot claim the employer is purposely trying to interfere with the protected rights of employees. Giving employees an unlawful impression of surveillance without actual surveillance, for purposes of intimidation, is illegal. In other words, the simple act of a manager taking his or her phone out of a pocket when union activity is occurring can lead to an expensive NLRB complaint.

All managers and supervisors need training on the laws concerning employee surveillance and the steps to take should union activity be detected. Policies and procedures need reviewing also. As the AdvancePierre Foods case demonstrates, your policies and enforcement of policies cannot violate the protected rights of your employees when you want to document union activity. It’s wise to have a labor law attorney review your employee handbook and advise on the consistent and legal application of its content. It’s also wise to work with professionals to develop informative materials for employees concerning the company’s perspective and policies on unions and to develop leadership training materials that focus on employee engagement. The best way to deal with unions is to stay union-free.

The Office of General Counsel issued a report in 2015 that reviews all the complex issues concerning monitoring in the workplace, many of which continue to be litigated as the recent cases demonstrate. It’s very telling that the report heading includes the phrase, “many more questions than answers.” It’s a sign of the times.