Company Change and How it Leads to Union Organizing: A Cautionary Tale - UnionProof 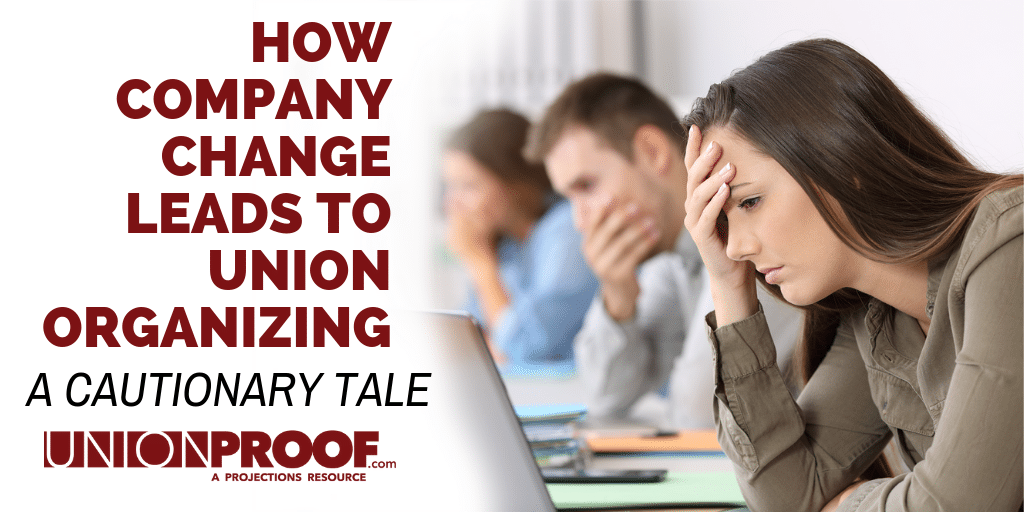 Company Change and How it Leads to Union Organizing: A Cautionary Tale

This is a true tale about company change, unionization, and the younger workforce.

Once upon a time, BuzzFeed was born as a new online digital media site focused on publishing stories involving pop culture and popular news, and making generous use of memes and listicles. Over the next 12 years, revenues grew and the workforce expanded as the company gained recognition for publishing innovative, sassy material in online videos, news articles, fun quizzes, and newsletters that hundreds of millions of readers can comment on and easily share through their social media sites. Staff members are mostly millennials – young, creative, and technology savvy – and are a mix of traditional employees, permalancers, and freelancers.

In January 2019, a host of Twitter postings by BuzzFeed staff members made it public that management was in a months-long process of laying people off, including people like the Director of Quizzes. The tipping point was when the company cut its workforce by 15 percent in January 2019.

Employees across job descriptions were laid off – editors, directors, podcast team members, video staffers, writers, and news team members. Naturally, they didn’t like the company changes being made. In February 2019, the News division employees announced they were forming a union. Soon after the announcement, employees voted to join the NewsGuild of New York union. The unionization process had been in the works for many months, even years, but once publicly announced, the process was swift.

Morals of the Tale

Unlike most fables, this tale has multiple “morals of the story.”

Moral One – New faces of union members are younger professionals

BuzzFeed employees are not beefy men in jeans and denim shirts in manufacturing plants, the persistent stereotype of union employees. They are young, white-collar workers who are writing and delivering news in digital formats. Across the country, the new union members are the people writing complex algorithms for tech companies and instructing at universities as graduate teaching assistants.

You can make smart, reasonable business decisions intended to keep your company profitable and sustainable. However, even reasonable decisions can lead to union campaigns.

BuzzFeed didn’t lay off employees, including the Director of Quizzes, because management wanted to harm people financially. The company changes were likely due to just wanting to reduce labor costs, adapt to a changing marketplace and remain sustainable. In one tweet, the Director of Quizzes said that quizzes do bring in a lot of money, but that a large amount of the traffic is now coming from the amateur quizzes posted by the site’s community of users. Many of the volunteered quizzes are free, whereas BuzzFeed quizzes cost money.

Other reasons for the layoffs, suggested in various tweets, included ad revenues shifting to Facebook and Google, overuse of click-bait political stories, and lack of organic growth in website users. BuzzFeed relied on venture capital money to grow the company, rather than relying on the expansion of the customer base. When revenues decline or growth in the customer base slows, layoffs are a normal consequence.

Layoffs inevitably result in employees looking for all the ways their employer has wronged them in the past or is wronging them now. One of the first public grievances concerned the company’s decision to not pay the people who were laid off for their unused vacation and comp days. Six hundred (600) News division employees signed a letter within days of the layoff that demanded the company pay out all accrued Paid-Time-Off (PTO) to laid-off workers. The request was granted, empowering employees to make further demands.

The letter used the language of unions, claiming employees had accumulated PTO because they are so “dedicated to their work” and “felt actively discouraged from taking time off” and have “rights.” Unions rely on emotions and making the employer look greedy and uncaring about employee welfare.

Even though BuzzFeed management agreed to pay the PTO, a long list of grievances soon followed. The News staff were the first to formally declare online in a mission statement they were officially forming a union of US employees in the News division with the NewsGuild of New York. The grievances mentioned in the letter are:

Notice the last three issues because they are the kind of new ones that unions increasingly address. Permalancers are people hired through and paid by a third party and are not given the same rights or benefits as employees. It is a sign of the times that unions have also taken on lack of diversity as an issue and are addressing issues like creative rights.

Moral Four – Unions never give up if they detect potential success

Unions are very patient. In many of the letters and tweets, there are references to employees undertaking an organizing effort long before the layoff. BuzzFeed employees had tried to organize over the past several years without ever getting to the union vote stage. Efforts were not successful until February 2019, when layoffs provided the final impetus for organizing. It’s during this time that BuzzFeed’s leadership should have focused on strengthening employee engagement and addressing specific concerns.

You may think a few failed union organizing attempts would discourage unions. It actually makes them more determined. They are also anxious to get a strong foothold among employees who primarily do virtual work, seeing it as a new land of membership opportunity.

Moral Five – Freelancers act like employees in a union effort

The BuzzFeed experience leaves little doubt that unions would happily have labor laws changed to include contracted workers, permalancers, and freelancers. It is not something that will happen soon, but a good prediction is that it will eventually because of the expanding gig economy. In the meantime, unions encourage employees to take on the issue.

The End of the Tale… Maybe

On February 12, 2019, News division employees voted to unionize. BuzzFeed’s management decided to meet with the union organizing committee to discuss the company giving voluntary recognition. Negotiations are still underway, per the BNF Union Twitter site, a good example of how employees organize, communicate and motivate each other today. If negotiations fail, the organizing committee has already said it will hold a union election through the NLRB. So right now, there is no ending to this fable.

There is a last moral, though. It is this: some things never change. BuzzFeed employees talk about “greed at the top” and their employer “not doing right by employees.” The basic union strategy has stayed the same, and it’s to convince employees their employer is taking advantage of its workforce. Staying union-free requires careful cultivation of a positive employee-employer relationship.