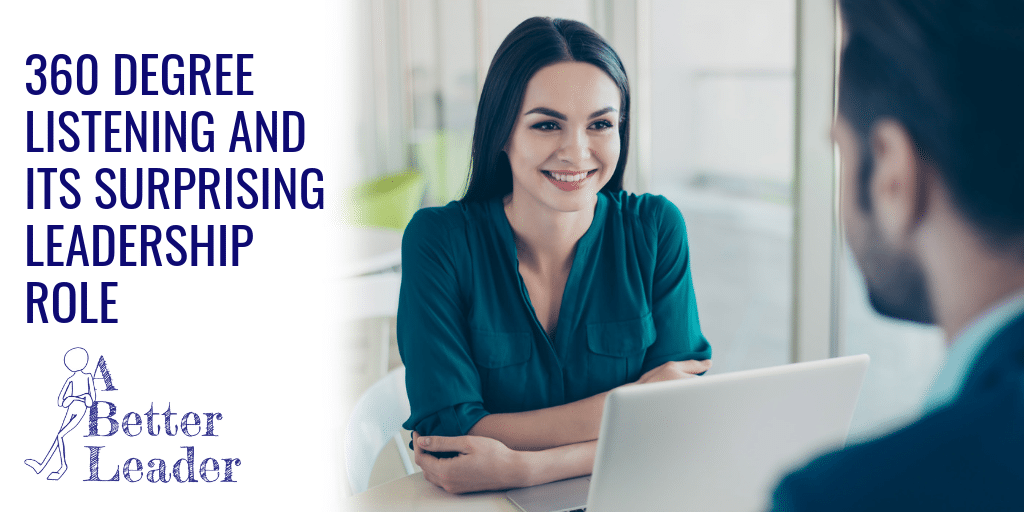 Imagine being able to sit across from a team member and know when they are either unsuccessful with or indifferent towards a particular project or goal, even when they aren’t saying so. It will help you lead your team to know the types of work they became passionate about and are motivated to accomplish well. Harvard Business Review called this 360-degree listening.

Over the course of the past three years, a colleague of mine has had the privilege of being a member of his organization’s Leadership Development team. The team’s goal is to discover and create leadership tools, train staff members to utilize these tools, and set achievable goals for their implementation, company-wide.  During a recent training meeting, a member of the Leadership Development team discussed active listening and some of the potentially unexpected results that could come from this timeless leadership and relationship skill. The training included areas where leaders can take 360-degree listening to yet another level by recognizing weaknesses in the skill of active listening.

Some Background on 360 Degree Listening

If you’re not familiar with active listening, it is a communication tool that helps you focus fully upon the individual you are speaking with rather than splitting your focus between forming opinions, coming to conclusions, or formulating a response. The practice involves listening to and then repeating the information you just heard back as you understand it. 360-degree listening is an invaluable tool for difficult conversations and conflict resolution, but its use in more casual settings is limited. Active listening in a staff meeting or casual conversation would not only often be counterproductive, but it would also be socially awkward. 360-degree listening involves a level of focus similar to that of active listening but adds in a few additional (and crucial) focus points.

A leader who is utilizing 360-degree listening will focus not only on what is being said but how – as well as what been left out. For instance, asking for an update on a project and receiving a quick one-sentence response can show not only a potential lack in meaningful progress but also a lack of passion for the project from the team member. Consider the response you would receive from a team member who was passionate about the outcome. Even if the project were not going well, they would be vocal about the changes needed or in their request for help. If it were going well, they would be eager to share updates on the progress and goals already achieved. Add to this your consideration of past interactions with the team member: times when they were passionate, keystone moments when their attitude or behavior may have changed. Doing this will allow you to develop more understanding of your team members and what motivates them to perform their best work.

360-degree listening can also guard your organization against union organizing, bad press, and even costly legal fees. An employee serving under a manager who effectively utilizes 360-degree listening is more likely to feel comfortable sharing struggles and issues within the company than looking to unions, government agencies, or lawyers.

In The 21 Irrefutable Laws of Leadership, John Maxwell writes, “If you’re in the habit of listening only to the facts and not the person who expresses them, change your focus — and really listen.” This mindset will help you better understand how to motivate your team and ultimately how to become a better leader.